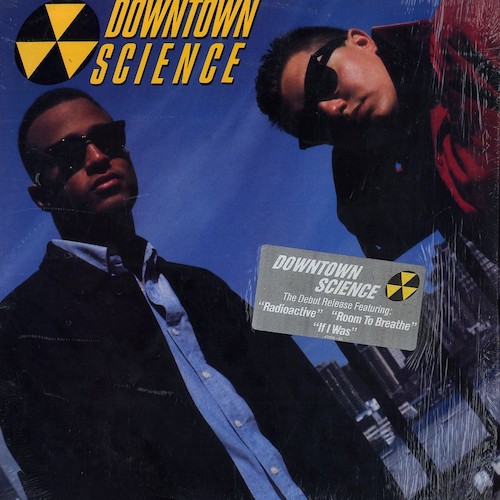 Thirty years ago the one and only album from the Downtown Science duo was released on Columbia Records. The self-titled release was also self-produced by the duo’s two members — Bosco Money and Sam Sever. This will ring an immediate bell for many readers, but if you’re new to Sam Sever, I’d point you to 3rd Bass’ “The Cactus Album” as a starting point. His production was so immaculate that 3rd Bass frequently shouted him out on their tracks, and Bosco Money was a contemporary of equal acumen. “Equality” was a big point of their tracks given that Sever was white and Money was black, which Money explains on “Out There But In There.”

“They gon’ redefine gravity and name it after me
The B-O-S-C, O-M-O-N-E-Y, G
And my man Sam Sever, cause both of us together
form the D-side, and we won’t separate ever
He’s rolling with me, so I roll with him
And we don’t judge each other by the color of our skin”

Barring the obvious irony of them immediately separating when the group wasn’t hugely popular, I have no doubt both members were sincere about their friendship and their desire to break ground in rap. They certainly caught my attention when the “Radioactive” single dropped, and it wasn’t because of the group’s racial makeup. The song had a mesmerizing bass, an up tempo beat, and echoing electronics that made it sound distinctive compared to their contemporaries. “The highs are bright, the lows kick” brags Money, and he’s not wrong. Their production skills shine here.

With strong musical chops and lyrics from Bosco Money that weren’t an embarrassment, why didn’t Downtown Science achieve greater success? It’s probably because rap fans were suspicious of (and resentful toward) white people in the wake of Vanilla Ice’s “To the Extreme” in 1990. ’91 was the year when the shit hit the fan due to his fake biography being dissected by the press, with all his claims of being “from the streets” evaporating LIKE ice in the hot sun. Even though rap groups like the aforementioned 3rd Bass had proved white rappers could have credibility in a black art form, Robert Van Winkle’s oversized success caused a backlash that would last nearly a decade until Eminem’s arrival.

Unfortunately this meant that the release of “Downtown Science” in 1991 was poorly timed. Instead of being taken as the sincere group who desired to “innovate, and invent/newer ways of dropping the content/so your time is well spent” they were treated as a gimmick trying to prove a point — and the audience at the time simply didn’t want to hear it. Speaking of poor timing, the duo included a song called “Summertime” that hits on the exact same themes Fresh Prince (Will Smith) did on the song of the same name the SAME YEAR. Smith’s song is now regarded as a hip-hop and pop rap classic while the Downtown Science track is never discussed. DS didn’t do it poorly, but Jazzy Jeff and Fresh Prince did it better. Sorry guys.

Bad timing and unfortunate coincidences are only part of the story though. With both members of the group being known for their production skills, there’s an inescapable air of “try hard” to Bosco’s lyricism, with intricate rhyme construction so carefully delivered it doesn’t leave them any “Room to Breathe.” I get that he wanted to be taken seriously as a rapper, and the raps he delivers are as “smooth and subliminal” as he says, but it still ends up feeling just a little bit forced.

The good news is that none of the issues that overshadowed the group in 1991 mar the quality of “Downtown Science” when listening to the album decades later. There’s a timeless quality to tracks like “This Is a Visit.” Surely that’s in part because it sampled The Who, Kool & the Gang and Pink Floyd among others (just imagine how much it would cost to clear that today) but it takes producers of Sam Sever and Bosco Money’s skill to make it WORK.

If I called “Downtown Science” a slept-on classic I’d be overselling it, but there’s no reason not to pull it up on the streaming service of your choice or cop a copy at your local thrift or pawn. History may regard them as one hit wonders who didn’t even hit that big, but Downtown Science had a quality of beats and rhymes that was at or slightly above what was par for the course in ’91. That means the album holds up well, despite the fact it never actually SOLD well, but sometimes in the music business that’s how it goes.