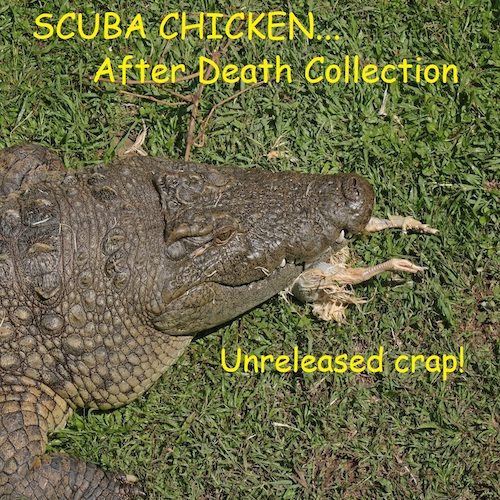 To fully comprehend the magnitude of the sheer ineptitude I’m about to discuss some context is required. The first review of Scuba Chicken on this website was well over a decade ago. The score was zero out of ten. Every contributor to this site has reviewed something ranging from mediocre to terrible at least once, but Pedro “DJ Complejo” Hernandez was so appalled that even IceJJFish is better regarded as an artist. “There’s absolutely no point in buying this CD or wasting any minutes of your life listening to it.” The Undertaker couldn’t bury a man better than that.

Unfortunately for everyone involved the infamy of being roasted that hard actually encouraged Scuba Chicken to submit more music to us — not once, but twice. At this point I’m sure I put my foot down and said “Bro, enough. Every person on this site has excoriated your music. Just stop.” The remarkable thing here is that’s not even the first time I’ve had to do it. After you’ve told someone enough times that they’re terrible and they don’t even try to get better, you’ve got to throw your hands up in the air and be done with it. The one thing a music reviewer should never want to feel is pity, but some people are so clueless that you genuinely feel bad at having to roast them over and over again. What makes them want to be ridiculed so badly? You don’t want to contribute to their self-flagellation any longer and making an example out of them on the internet isn’t funny any more.

So many years had gone by since we covered Scuba Chicken that I forgot he even existed. Knowing that he’s reading my review of “After Death Collection” right now, I’m not sure how he’ll feel about that. I honestly don’t understand why he’d want to do this again, but a bizarre series of incidents transpired that convinced me he actually wants this. I’m pulling back the curtain because you need to understand what’s going on, and he needs to get the full picture if he can comprehend the words I’m about to write. First I got a random e-mail telling me that someone tried to send me a CD but that it got returned with no forwarding address. I told him that due in part to the global pandemic and in part due to the impossibility of storing so many albums, we’re just not taking physical media any more. He asked what he could do and I said “Just send me a WeTransfer or a Dropbox link instead. I’ll take a look at it.” THAT WAS MY MISTAKE. I FUCKED UP.

Ladies and gentlemen of the jury, I submit to you that Scuba Chicken’s “After Death Collection” is TWO HOURS AND FIFTEEN MINUTES LONG. The very first track featured Scuba Chicken singing “I bust a nut like cheese” in the style of Sukiyaki’s “A Taste of Honey” — a hook you may know better from Doug E. Fresh & MC Ricky D’s “La-Di-Da-Di” or Snoop Dogg’s cover. Scuba can’t sing though. Scuba can’t rap either. Scuba is self-produced and he can’t produce worth a lick. He’s off beat, he’s stringing non-sequitur phrases together, and 1:06 into the song he runs out of things to say and starts making babbling noises. I wish I was making this up.

There are so many things wrong with “After Death Collection” that it’s hard to even know where to begin. The length is far from the only one. The cover art looks like it was made with MS Paint in the 1990’s. The songs aren’t sequenced so even when you try to sort them they always come up in alphabetical order. For the love of (insert your deity of choice here) he has a “Double D Acapella” that’s FOUR MINUTES LONG and he’s rapping into a microphone that is worse than the one built into laptop computers. It’s not like he walked into Kenny Beats’ studio and was told “Don’t Over Think Shit.” He didn’t think PERIOD. This release is inexcusable in every way. Don’t believe me? Listen to the production on this “Freestyle” and tell me that I’m wrong. I dare you.

I already said I was pulling back the curtain on this review so I’m about to really hit you with some shit — I was the FIRST VIEW of that track on YouTube. So few people care about Scuba Chicken in 2020 that in fact no one had listened to the song before I clicked on it to embed it for the write up of “After Death Collection.” Undoubtedly those numbers will go up now because of morbid curiosity, and if I’m being honest here I think that’s exactly what Scuba Chicken wants. He has to know that he’s no good. We’ve told him SO MANY TIMES that he’s no good. Inexplicably over a decade after he should have disappeared from the rap scene permanently, he came back to be abused all over again, which can only mean that he wants it and craves it for reasons I shudder to comprehend.

Scuba Chicken fooled me. His e-mails were polite. His inquiry made me offer him an alternative. I suffered for my kindness so that none of the rest of you have to. Reviewers and listeners alike be warned — do not answer Scuba Chicken’s inquiries no matter how nice he is. I had completely forgotten he existed and listening to “After Death Collection” I’ll be happy to forget him all over again. He’s the literal equivalent of a fertilizer salesman making a horror movie and while at first that may seem funny, try watching it without the wisecracking robots to liven up the proceedings. It stops being funny and it just becomes boring, irritating and obnoxious. If Scuba Chicken is trying to be bad on purpose he succeeded, and if he wasn’t trying to be bad on purpose, I really do feel bad for what I’m about to say to him: “NEVER RAP AGAIN BECAUSE YOU FUCKING SUCK AT IT.”