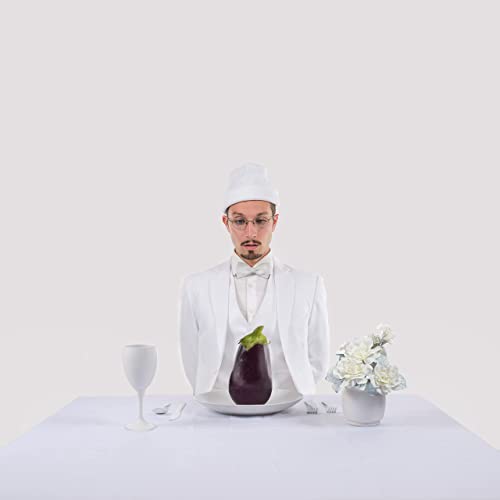 How should one listen to or critique a self-described “oxymoronic rap” artist? Any time I partake of bbno$ I get the feeling he’s not taking anything he does seriously, and yet his words are still being delivered with genuine attention to breath control and flow. He doesn’t just show up to the studio stoned to the point of incoherence, mumble a few non sequitur bars into the microphone, and then leave some producer to try and stitch a song together. It’s not a coincidence then that he’s known for (and in part famous because of) his collaborations with Yung Gravy. Both men blur the line between parodying rap conventions and reveling in them.

“eat ya veggies” is the latest bbno$ effort to explore this intersection, and if it wasn’t obvious that you’re not supposed to take him seriously, he’s got a song with Rebecca Black called “yoga.” Here’s the thing though — if you ignore the fact that he’s featuring a woman described as the worst thing to ever go viral it sounds exactly like a Doja Cat single — I mean EXACTLY. I even checked to see if the song was produced by Dr. Luke. It’s not. Someone named Diamond Pistols is doing an incredible imitation of his sound.

bbno$ continues to confound me with songs like “u mad!” The Y2K beat is easy enough to listen to — strong bass hits, pleasant change ups, a melodic earworm of a song overall. The lyrics are absurdly over the top though. “How’s it feel to make a mill’ every minute BITCH?” “I feel like Elon Musk, BITCH!” He is absolutely poking fun at excessive flossing and conspicuous consumption, but saying it with enough conviction that he could easily be mistaken for taking every word of it seriously.

At only a half hour long “eat ya veggies” doesn’t give you very long to decide how to feel about bbno$. Take “tonight we fuckin’ party” for example. You could view it as a modern day update of Beastie Boys “Fight For Your Right (to Party)” or you could take it as an absolute throwaway moment — which it is, because it’s the last track on the album and barely over 90 seconds long. Even songs you could almost take at face value like “Edamame” featuring Rich Brian are only a couple of minutes long, and both artists are straight up clowning around in medieval armor as they ball like rock stars. Like a lot of his songs though it’s an infectious listen, and once again Diamond Pistols is the producer to blame.

I get this feeling I’m supposed to hate bbno$. He’s not taking his rap career seriously, and somewhere deep down I should be offended by a guy who can’t show respect to the art form. The problem is that he’s good enough that even when he’s half-assing it the songs turn out okay, and the fact that he’s parodying rap conventions winds up being a sincere form of flattery. Maybe I just inherently want to hate it because a white guy from Vancouver is taking a traditionally black art form and playing around in it while other artists are struggling to get noticed or taken seriously. If there’s a lesson to be learned from “eat ya veggies” though it’s that the path to success is to be true to yourself, even if you’re naturally kind of a clown.