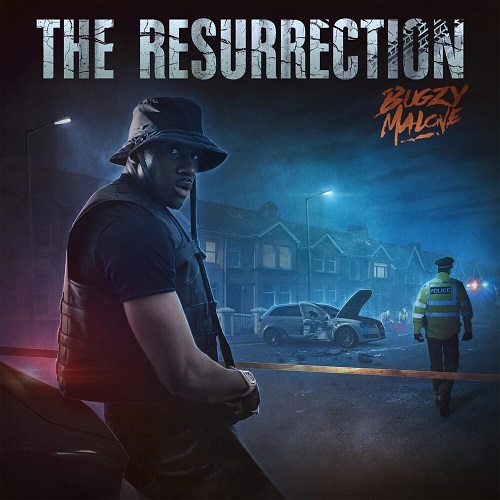 On his 2021 album, roughly his tenth project overall, Manchester’s Bugzy Malone characterizes his career as “one long story”. This analogy can be correct under two conditions – the career is long enough to amount to something resembling a story and eventful enough for an actual story to be told. Then again, how many rap discographies serve as universally understood memoirs? Probably very few, scores of autobiographical anecdotes that make up your average album notwithstanding.

A quick research confirms Bugzy Malone’s career does have a narrative quality on both accounts – continuance and consequences. His first release in 2010 and ensuing local and eventual national buzz accompagnied a return of the grime genre back to its roots after commercial success (and excess). At one point, he deemed himself worthy of the title ‘King of the North’. Furthermore, run-ins with the law put his career at risk and a road accident endangered his life. The latter episode directly influenced “The Resurrection”. Hitting a car with his quad motorbike in March 2020, the artist born Aaron Davis suffered severe head injuries (undoubtedly also due to the fact he rode without a helmet) and subsequent complications.

While Malone addresses the incident in suitably dramatic fashion, he doesn’t exploit it to the extent where it would become the album’s focal point. However, be warned, “The Resurrection” trafficks in heavy stuff. In the given circumstances, Bugz is a confessional rapper who doesn’t hesitate to open his emotional baggage. Without having to go into detail here, the first two tracks relate personal information that pierce through the shield of invincibility that artists in this genre often like to put up. He’s fully aware of the fact that he lets us in on a therapy session (“In the studio with my feelings”), closing the title track with “Pardon my lack of discretion. Part of me died. This is the resurrection”.

Rap has long embraced the idea of ‘resurrection’, but often it’s merely about an intended comeback. Bugzy Malone doesn’t deal in the superficial (at least not for long). And while surviving such an accident is clearly the oft-cited wake-up call, it’s the old wounds that keep him awake. On “Cold Nights in the 61” he delves into his personal struggle for survival and the compromises and the losses that come with it. “Welcome to the Hood” aspires to be more universal with support from Emeli Sandé and a soundtrack to match.

Moments of escape are rare, “Bounce” has a J Hus vibe and “Ride Out” is a lesson in showing off with true style. Overall, “The Resurrection” is a stark foil to the juvenile American fare younger people might get in touch with first nowadays. Bugzy Malone, the moniker curiously derived from a musical comedy starring children as prohibition-era gangsters, rather invokes genius painters (Van Gogh, Dalí – “I’m cut from that cloth”) and finds inspiration back home, either dwelling in the dark like Giggs or lightening the dark up like Stormzy (“Don’t Cry” with singer-songwriter Dermot Kennedy), or engaging in biographical storytelling in the tradition of Kano (the haunting “Van Gogh Effect”).

“Turns out there’s no one you can bring with you / when you’re the only one to see the bigger picture”, Bugz states on “Cold Nights in the 61”. Professionally, he has found collaborators who share his vision, having been cast by Guy Ritchie for two films. Production-wise, Blinkie, Rymez, Kevin Gani and others fill the background with subtle musical decor that would also cut a fine figure by itself. The rapper unites with former rival Chip on “Notorious”, also a reminder that this is a generation who still has a recollection of Big and Pac (both also mentioned in “Welcome to the Hood”). Preferring to share his stories at album length rather than on social media, his “M.E.N” series references the local Manchester Evening News. And for a final confirmation of B.Malone’s traditionalist ways, his solid natural singing voice is sparsely and strategically used.

“The Resurrection” is a somberly iridescent record that scores with class and clarity, pairing a lean, futuristic-symphonic instrumentation with a vocal performance that is as intimate as it is intense.