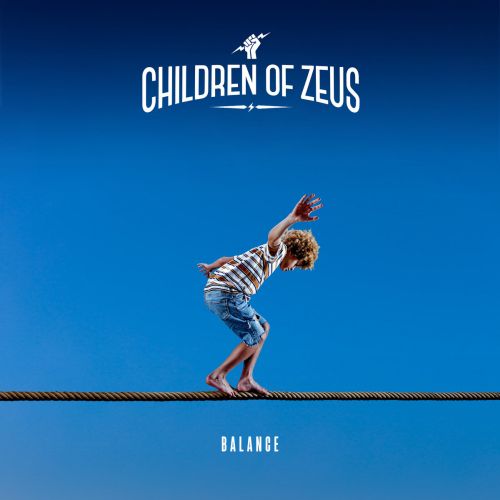 Children of Zeus are Konny Kon and Tyler Daley, the former an emcee, the latter an R&B vocalist. They have garnered plenty of acclaim from their debut album “Travel Light”, a great hip-hop soul (or Neo-Soul if you will) record that put the duo on the map in 2018, despite both already being veterans in the UK scene – Konny Kon was part of Broke ‘N’ English, a rap trio from Manchester while Tyler Daley (not to be confused with fellow Mancunian R&B singer Daley) was in Body Roq – and they met back in 2004 when both groups were on tour. The fact these guys have been around a while certainly adds to what Children of Zeus is about. Maturity, reflection, and the sense that these two fellas know what they are doing. Everything oozes a bit of class, a bit of panache yet feels distinctly lived-in. These are their stories.

Production is largely in-house and there are no guests bar the song “Balance” (with Akemi Fox and Georgie Sweet) and there doesn’t need to be any outside interference. Konny and Tyler have such great chemistry and have created their own style that effortlessly blends butter-smooth R&B with upfront rapping. Every song is soaked in bass, but not in a glossy way perhaps American counterparts lean on – there’s still a stripped-back mood that’s workmanlike harking back to the years of Northern Soul when whole nightclub scenes emerged around the late 1960s/early 1970s soul boom. If Konny and Tyler are any of the actual children of Zeus (loose use of the word actual, given this, is Greek mythology), they would be Hephaestus. He was a grafter. More accurately though, they are simply descendants of the music gods.

I really enjoyed the “Travel Light” album, but my main criticism would be that it started so strong it inevitably petered out toward the end. “Balance” is just that – balanced, but the track “No Love Song” is such a fantastic way to start: the sheer pessimism of “I’m going to let you down” feels bold both as a concept in R&B but also as a follow-up to the critically acclaimed work that came before this. The guitar lick certainly helps – something Children of Zeus are great at utilising and there’s a classy feel to songs like “Be Someone”. Perhaps it’s years of listening to more explicit vocalists like Tank and Jhene Aiko, but I feel like this music would work in the bedroom just as well as it would on the school run. It has that special quality that a Marvin Gaye or Gladys Knight and the Pips had, and I’m aware that’s ridiculously high praise, but it fits right in with that level of artistry.

“I Need You” is Dilla-like in its pacing, bumping along like a classic Slum Village single. Tyler excels and certainly sounds like he’s reached a higher level throughout “Balance” with both his bridges and his writing. That’s not to discount his rapping either, which, along with Konny’s often act as the perfect counterpart, before it all gets a bit too soppy and sentimental you get a hit of bluntly delivered rhymes straight from the heart. I’m surprised we don’t see more duos that lean on this setup.

A pleasant surprise was hearing Beat Butcha on production – the same Beat Butcha that’s been working with Westside Gunn and Conway the Machine! I grew up on some of Butcha’s earlier material with Manage and Triple Darkness, but hearing him carve out granite tough beats for Griselda and then deliver a “Be Someone”? That’s pretty impressive.

That combination of rap and soul, and old and new, shines again on “The Most Humblest of All Time, Ever” with the throwback visuals and drill-like beat. They somehow made a hard bassline smooth and that continued notion of yin/yang plays once again to Children of Zeus’ strengths. A clapped-out Austin Maestro and lugging boxes of vinyl into pirate radio feels like a lifetime ago yet it’s infinitely more interesting than your standard rap video with a rented Lamborghini. Like, where do you even find Austin Maestros these days?

“Love Again” hit me right in the chest and that’s simply down to how honest and real Konny’s verse is delivered so matter of factly. You can hear the years of pain and hard work that’s got the guys to where they are now, and hearing Konny state “I don’t care about YouTube views, we get more views in attendance” acknowledges both the fractured nature of modern music and the purity of preferring to vibe with fans outside of a screen. You can be independent with a dedicated fanbase and be successful in the era of streaming, and when you’re crafting records of such high quality and allowing listeners to acknowledge, absorb and enjoy them, they deserve all the success that comes their way.