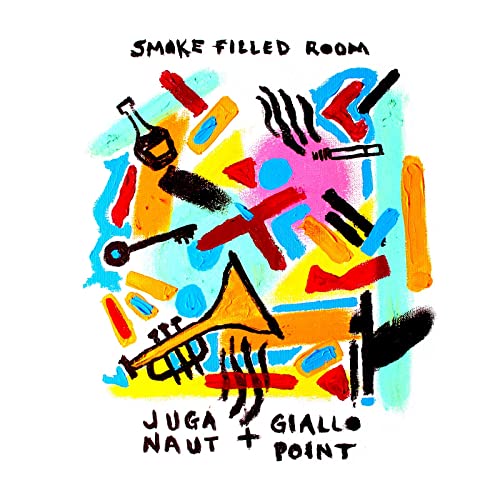 It has been an annual tradition for November to be a “UK Month” at RapReviews. Some years we post an editorial to announce it, while other years (like this one) it’s a little more informal. Behind the scenes the writing team discussed whether or not we were going to continue the tradition or spread out UK reviews instead of focusing them on one month. It may do my brethren across the pond a disservice to say “we talk about you in November only,” but it may also be a chance to shine a light on a lot of artists that rap fans in North America don’t seek out on their own. Ultimately either Matt or Grant may summarize our thoughts on this debate, but in the meantime I’d like to talk about a “Smoke Filled Room.”

UK rappers used to get dismissed by the impatient US listeners for being “too hard to understand” thanks to the accent and slang. It may be that after decades of listening that’s no longer an issue, or it may be that Juga-Naut is really precise with his diction and delivery, but I find him far easier to listen to than a lot of today’s AutoTune mumble rappers. I’m not saying the Nottingham native doesn’t have any accent though — far from it. As he says himself on “This & That” he’s “bridging gaps between British acts and pidgin English” with his delivery, but it’s also the smooth production of Giallo Point that helps cross the divide. Even when Jugs speeds up his flow and leans into his roots on a song like “Eating the Rich” his voice comes through clear.

The video for “Eating the Rich” accidentally highlights that he may not “handsome” by the measures of Hollywood actors, rap stars or magazine models, but he’s clearly comfortable in his own skin. There’s even a second at the start where he’s got his shirt off showing all his tattoos (it’s an impressive amount of ink work) and I have to say “good on ya” to Jugs. We’re not all born to look like Dwayne Johnson. Don’t get it twisted to me saying that Juga-Naut isn’t a good looking chap, I’m just saying a dude like me could learn a thing or too from his level of self-confidence.

Songs like “Top of the World” feel like old school throwbacks. It’s the kind of gentle, smooth jazz you’d hear on a Madlib collaboration, with the hard raps inexplicably merging with and melting into the light AM radio sounds. “Why do people think being boring is being grown up? Skin full of ink from the toes up.” Those two bars might summarize Juga-Naut better than I have thus far, but I really love the point he made just seconds later. “Why do people always film theirself doing charity?/A selfless act, not for vanity/That defeats the object of the main point, challenge me.” I have no challenge mate — I agree with you.

“Smoke Filled Room” has hidden moments seemingly designed to amuse those in the know, like “Platinum Barbells” sampling vocal snippets of the viral small angry man who didn’t like a busker playing his trumpet. Even if you didn’t know the reference you’d enjoy the track just for the production and the raps, and if I have one decent point to make about Juga-Naut that would be it. You enjoy his music even if you don’t know he’s a big man in Nottingham. You’ll like it whether your dialect is the same as his or not. If I had a knock it would be a small one at best — his occasional tendency to fall into a pattern of starting multiple bars the same way. It’s like Juvenile’s “Ha” in reverse. This isn’t a deal breaker though. “Smoke Filled Room” is a pleasure to listen to from the beginning to the end, and it’s hard to find too many albums on either side of the Atlantic these days to say that about.