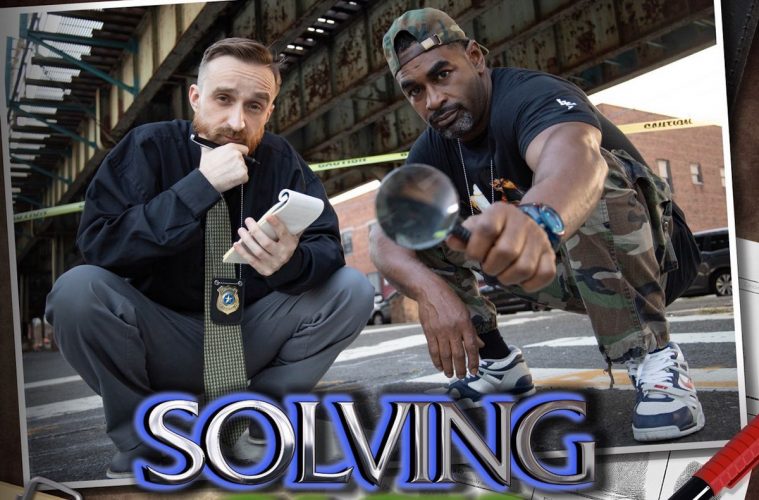 Newark, NJ rapper El da Sensei is one of those emcees who just doesn’t get enough credit. True, he’s a member of the Artifacts crew and has released several solo albums, but why he doesn’t rank higher, even in underground circles, is anybody’s guess. Signing with SpaceLAB Recordings and doing a collaboration album with label head-honcho Jake Palumbo is another addition to El’s storied catalogue. Enter “Solving Cases”. Entirely produced by Jake Palumbo, the album cover and lettering are modeled after a “Law & Order” promo pic. Despite that, “Solving Cases” is not a concept album, unless they want to investigate and solve the ever-present case about the state of hip-hop. The first half of the album contains no features, but after track number 7 is where the guest emcees role in, from Wordsworth to Ruste Juxx.

The album begins with “Blast Off!!!”, with a beat comprised of some funky piano key samples and slapping bass line. “Solving Cases” has some live-sounding drums to give it an organic aesthetic, but the emcee takes center stage here. El da Sensei’s breath control is impeccable, as is his ability to pack so rhyming syllables within bars and still stay on beat. “Heat Stop Working” samples Freeway’s vocals from his signature track “What We Do”. Palumbo’s productions have a heavy funk element to them and this beat is a head-nodder. A funky guitar riff drives the beat on “Win, Lose, or Draw” while “Rule & Rock” has some very intense string sampling when the song reaches the hook.

“Throw It All” is a standout track. El’s emceeing on this is an attention grabber, with his rhyming patterns over a layered beat with piano, hard drums (courtesy of rapper/producer J-Zone), and a multi-tracked vocal choir all throughout the song. “Inhale” is very relaxing and psychedelic with its atmospheric horns and El’s voice having an echo added to it. This is of the few topical tracks on the album, this one being what I oft-consider the obligatory weed anthem on a hip-hop album. After “Inhale is where the guests come in and those features start with a posse cut. Featuring Wordsworth and Jay Legato, “Last Laugh” is very boom-bapish and appropriately so considering the caliber of hardcore emceeing:

Things take a twist on “SpaceLAB Gods”, with Jake Palumbo stepping into the booth and grabbing the mic. The mic may be El’s show, but Jake can certainly hold his own and has some impressive wordplay (“Knoxville blues, Brick City attitude”). “Watch How We Come” features UK rapper Mr. Spyce and has a very reggae feel to it, in terms of the production and El’s rasta-inflected flow over the beat. It is, as the emcees state, an island breeze. “Not the Same” features Innocent? and Sadat X. It’s definitely a dark and moody track as the beat is very ominous, which works as all three emcees spit some lyrical bars against unseen opponents.

Big Joker makes an appearance on “Thoughts Combined” and spits with the same intensity as El over the bass-driven boom-bap. “Bring It In Loud” has drums sounding deeper on this one while “Head Buss Special” features SKAM2? and Ruste Juxx. Featuring Shabaam Sahdeeq, the album closer is “Graffiti the World”. Ironic, because the album ends where El himself began in hip-hop: As a graf writer. With “Solving Cases”, El da Sensei and Jake Palumbo made some good headway in investigating hip-hop puzzles.