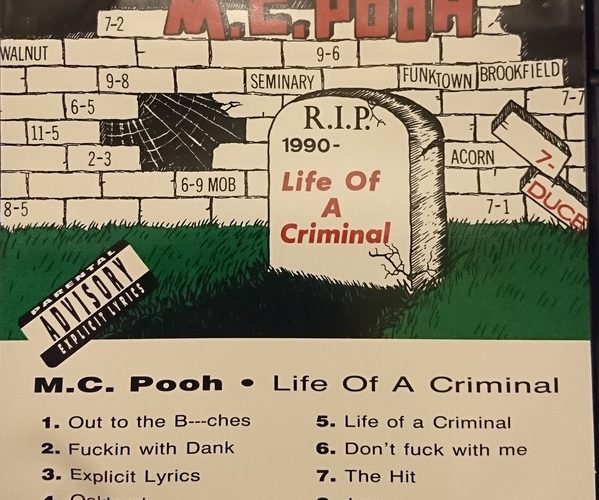 Life of a Criminal

MC Pooh :: Life of a Criminal

If you had any doubt that Too $hort was the biggest rapper to come out of Oakland, California in the 1980’s, you only have to listen to 30 seconds of MC Pooh’s 1990 album “Life of a Criminal” to confirm it. He sounds almost exactly like Todd Shaw in every way — his inflection, his cadence, his liberal use of the word “bitch” and his vocal pitch. It’s a tad bit higher than Too $hort, but if you listen to the earliest $hort recordings his voice was higher pitched as well. It’s no surprise that Short Dawg’s range got deeper sooner as he’s three years older than Pooh, who clearly aspired to be his protege.

“Life of a Criminal” gained him that opportunity thanks to the regional success of “Fuckin’ with Dank,” produced by and featuring Ant Banks. Pooh was brought into the Dangerous Crew, released his second album on Jive Records, and had a song featured on the Juice soundtrack. This should have propelled him to the heights of fame and fortune, but by his own admission Pooh couldn’t leave the streets behind and kept getting in fights with $hort and everybody else involved. It wasn’t long before acrimonious diss records started flying back and forth, but that’s a story for another day/review.

The upshot of all this is that Pooh really did live that criminal life. It gave him the title of his first album, but it also derailed his career right as it got going, and in 2000 it led to him serving just over six-and-a-half years in prison after pleading guilty to a charge of bank robbery. I never want to think prison is a good way to get rehabilitation, but in Pooh’s case it seems to have worked. He left the street life alone, he made peace with Too $hort, and he now gets to live the life of being a seasoned O.G. who can give some wise advice to the young folks coming up the same way he did.

Let’s get into the specific positives and negatives for “Life of a Criminal.” The production from Ant Banks gives this release a classic sound that has aged well. The cover art and overall presentation may look amateur, but the polish of the music is 100% professional. The album is (no pun intended) too short as a result — eight tracks just isn’t enough. I also can’t help but raise an eyebrow at the title song, just because Pooh-Man didn’t take his own advice about the consequences of a criminal life. Then again he didn’t wait more than one track to say “Don’t Fuck With Me” and threaten to “beat you out your motherfuckin’ shoes — another story for the 10 o’clock news.” You can say he was just telling stories, but he did this shit for real too.

“Life of a Criminal” is more than meets the eye in so many ways. It looks low rent but it sounds penthouse apartment. It appears to be a Todd Shaw clone but then shows some depth and thoughtfulness once you get past the opening track. It sounds like a man telling tall tales, but Lawrence Thomas was that rare breed of emcee who lives what he’s talking — which didn’t really turn out to be a good thing. The term “studio gangster” became a common diss from this era onward, but there’s something to be said for having a long career in the studio and not a long life behind bars. Pooh learned that lesson the hard way.