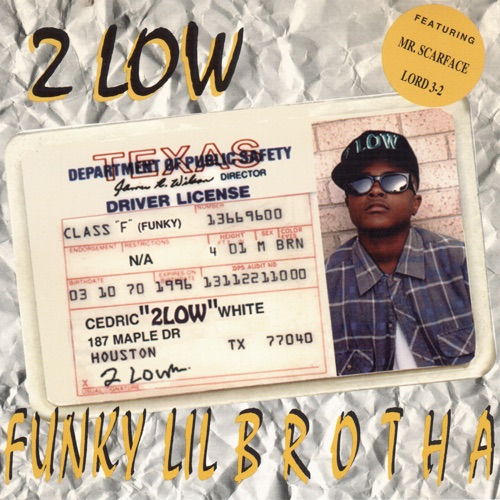 Under the artist name 2 Low, Cedric White was not only Rap-A-Lot Records’ official entry in the kiddie rap race of the early 1990s, he was also the first artist to successfully defy savvy Houston label head James Smith with legal action. A lawsuit filed in 1994 claimed that White was never compensated for record sales, songwriting, merchandise, or live performances since he began working with the label as a 12-year-old. The initial amount in controversy came to $28.5 million, and while the actual sum that was agreed upon is not known, fact is that the label decided to settle the matter. Bigger men have failed to prevail against James Smith in business disputes.

Interestingly, Rap-A-Lot shared responsibilities with subsidiary Face II Face Recordz, a boutique label for Brad Jordan who also gave 2 Low his most prominent placement with the “World Is Yours” duet “Funky Lil Aggin” (aka “Funky Lil Nigga”). True to the label’s collectivist approach, 2 Low was additionally deployed to ’93 and ’94 albums by Too Much Trouble, DMG, Geto Boys and Odd Squad.

Rap-A-Lot would soon present a more mature version of teenage rap with the Fifth Ward Juvenilez, but in 1993 “Funky Lil Brotha” was the field test. Kris Kross’ “Totally Krossed Out”, arguably the subgenre’s big bang, echoes across a couple of tracks, yet the central idea behind 2 Low was to create a baby gangsta version of so-called reality rap. 2 Low was there to represent for the B.G.’s. New Orleans’ Cash Money Records later drove the concept to success with fresh-faced rappers like B.G. and Lil Wayne.

Inevitably, a number of efforts on “Funky Lil Brotha” couldn’t escape the clutches of gimmickry. Maybe intended as an update of Rap-A-Lot O.G. Raheem’s “Schooldaze” (1991), “Class Clown” comes more across like an adult’s idea of a primary school parody of gangsta rap:

“I was 10 minutes late when I snuck into class
Got behind the teacher, palmed her ass
And stepped aside, she turned around and slapped Tyrone
I had the whole class laughin’ while I was holdin’ my bone
Rudy tried to tell her that I did it
So I had to bust Rudy’s nose
and stuck my pencil up his booty hole”

That’s exactly the kind of holy terror you want in your class, right? Following the image established on “Funky Lil Nigga”, we also catch 2 Low smoking weed on campus. Like his elder rap colleagues, 2 Low, in his “Class Clown” role, defiantly refuses to be a role model: “They want me to be a leader, thinkin’ I would love to / But a brother’s too hard and too low to look up to”. Let us consider the premise here – this is essentially juvenile self-awareness as imagined by ghostwriters. It’s quite weird, to be honest, and an example of how fast things can go wrong even when you try to manufacture seemingly simple concepts.

“Funky Lil Brotha” has a range of them. There’s a bit more than meets the eye to “Growing up Ain’t Easy”, which starts out as a lament of the kid who’s subjected to tough love by his mother and his elder brother (“It seems like my best ain’t never good enough”), but once the song leaves the house and ventures out on the streets, the focus shifts to the tragic events kids in the hood are prone to witness.

Frequently, “Funky Lil Brotha” follows several impulses at once. With its plucked strings and cloudy synths, “Everyday Thang” is geared to pull at some heartstrings, but essentially being about the temptations that come Cedric’s way each day (gambling, smoking, fighting), he doesn’t quite strike the right chord vocally. His continually sniffly delivery doesn’t help either. Rap-A-Lot Records has a major legacy when it comes to the idea of acting in rapping, and it’s obvious that 2 Low was a trainee as well, but his often stiff performances regularly fail to create a connection with the listener.

By contrast, his duet with Mr. Scarface sounds much more natural, even as “Funky Lil Nigga”, for 2 Low’s debut revamped as “Funky Lil Brotha” (or “Funky Lil Brother”), is overloaded with funk synths and cleaned up in regards to cursing, smoking and drinking. Another “The World Is Yours” reference, “The Groove With Mr. Scarface (Strictly For the Funk Lovers Pt. 2)” actually trumps Face’s own overlong interlude “Strictly For the Funk Lovers” as 2 Low leans into the relaxed groove, rapping, “I be jammin’ like a old school vet / I be workin’ up a sweat, havin’ fun as I earn my check”, while someone – Scarface himself?! – croons a “Do Your Thing” (Isaac Hayes) interpolation. Also noteworthy in terms of execution is “Da Hood” featuring Hiram Clarke father figure Lord 3-2 and vocals from what might be a local soul/swingbeat group.

To get the younger generation involved, tracks like “Here We Go” and “Boo Ya” are meant to ignite a crowd, and although they are simple, the producers still manage to make a mess. “Boo Ya” features censored words back to back, there are references to ‘youngsters’ that may or may not be taunts thrown at Philly group Da Youngsta’s. “Throw Ya Hands in the Air” is Kris Kross meets Ganksta NIP, two things that definitely don’t belong together. “Send Ya Fa Mama” works better (regardless of the oversampled “Funky Worm” backing), 2 Low mixing schoolyard barbs with an aggressive rap attitude. The songs on “Funky Lil Brotha” may not be one-dimensional, but they are at best two-dimensional. “Pain” makes out two rather stereotypical targets – girls and teachers – as a potential pain in the neck. Or rather the expression comes in combination with another body part, which in the same verse is once censored and once not censored.

Ultimately, 2 Low was another piece in Rap-A-Lot’s exploitation puzzle (Convicts, Choice, Baby Geto Boys, Ganksta NIP, Menace Clan and of course the Geto Boys themselves). He was the junior, and in case you didn’t realize which age bracket he was in, the posse cut finale “Comin’ Up” arranged a contest with 10 other minors. The help he had from Scarface and Devin is evident, as is the influence not just of “Totally Krossed Out” but also “The Chronic”. Still “Funky Lil Brotha” occasionally offers the bluesy atmosphere pioneered by hip-hop from Houston. (Speaking of, the outro celebrates the Rockets’ NBA Championship.)

Ultimately Deuce to the Low had to fill one role too many, rendering all of them unconvincing. The temperamental kid could often be heard on rap records between ’92-’94, but 2 Low comes across as the most immature from a technical point of view. It seems that Rap-A-Lot didn’t spend as much time and money on 2 Low as on other projects. There are claims that a 2 Low album had been in the works much longer and that originally it would have been much more offensive, but even if the album that was eventually released in early 1994 wasn’t rushed, it has every appearance of being the result of rushed decisions. If you think of other masterminds behind rap classics, the Boogie Men (DJ Pooh, Sir Jinx, Ice Cube) for instance would have executed this with much more finesse and success.

2 Low’s career began promising, a kid being attracted by the neighborhood studio, interested in the recording process, looking over Mike Dean’s shoulder, running errands, etc. The artist’s authorized bio states that ‘after his stint with RAL 2 Low got caught up in the street life at an early age. Numerous drug and gun cases caused 2 Low to miss his childhood and hindered his rap career.’ Comeback attempts included a guest spot on Lil Troy’s successful “Sittin’ Fat Down South” album and the establishment of StreetBoss Recordz, yet ultimately the promises of the music industry didn’t come true for 2 Low. Promises which the press at the time quoted (from court documents) as follows: ‘They promised to help him do better in school, to show him how to stay out of trouble and to make him a successful rapper who would be famous and make lots of money.’