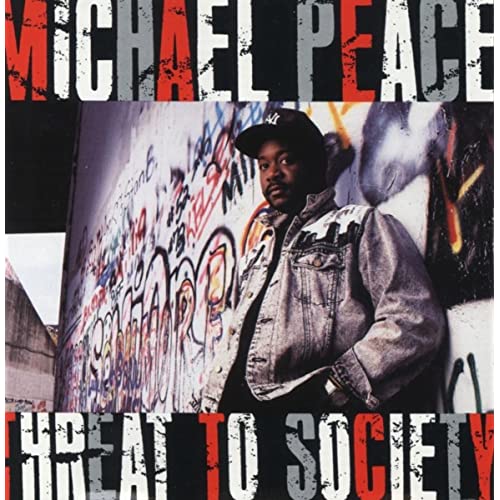 “Threat to Society” is a strange album. Michael Peace is reputed to be the first mainstream Christian rapper, or at least by his Wikipedia bio’s account “the grandfather of Christian hip-hop” (honestly the whole thing reads like it was self-edited), but I have absolutely no memory of this 1991 album. It’s certainly not for a lack of awareness on my part. I was subscribed to rap magazines, I was mail ordering rap tapes not sold in local stores, and I was reading newsgroups like alt.rap (yes believe it or not we had internet in ’91). Nobody was talking about Michael Peace, and I never saw his videos on Yo! MTV Raps or Pump It Up. There’s a good reason for that.

I could be wrong… but I’d swear that “J.D.’s Jam” is sampling the exact same break as Eric B. & Rakim’s “Casualties of War.” Michael Peace may have predated him (and the Beastie Boys), but once Rakim dropped his single this already obscure song was dead in the water. Which would you rather listen to — the intense lyrical delivery of R talking about the Gulf War and PTSD, or a man of God named Peace dropping corny bars? “I’m down with Jesus Christ” is not the endearing sentiment he intends it to be, nor is his strange choice to rhyme “gladiator” and “radiator,” and I’ve never heard the latter word said that way. It would be like saying “rad-ee-oh” instead of “radio.”

“My Manifesto” may be the most inappropriate use of 45 King’s “The 900 Number” ever. It’s not even a rap song. Michael Peace is preaching to the listeners, and I do mean that literally, because he’s exhorting listeners to eschew material possessions and “not flinch in the face of sacrifice” and “stay up for the cause of Christ.” It may have even been sampled from a sermon because people seem to randomly start clapping during the track.

Every bit of “Threat to Society” right down to its title seems contradictory. Michael Peace is embracing the hard sound of New York rap from the era, but his topics are as soft as a newborn baby’s bottom. The title track tries so hard to exude that threatening sound out of every pore, but Peace’s rapping undoes all that hard work. “Want to stop me? Don’t even try it/With the power of God, it can start a riot, see?” I don’t believe you, you need more people. “I’m holy ghost armed.” Still not buying it. “I’m serious, no I’m not playing.” Sure.

Unfortunately this is the problem so many Christian rappers have. They want to have the credibility of their contemporaries, and they even try to imitate the sound, but they quickly erode your trust in them by making every other word a reference to God, Jesus, Christianity, or a Biblical verse. Even rappers who state in interviews that they believe in God and pray every day don’t tend to make whole albums about it. The late DMX might have started an album with a prayer, and occasionally called on God for strength when he was in a bad situation, but he didn’t beat you over the head with his faith like he was trying to convert sinners on every song.

“Why it’s even against the law for me to speak up, in the name of my God.” “Peace in a Time of Chaos” is where Michael Peace pulls out the most tiresome trope of Christian rap possible — the persecuted Christian who is ostracized for his faith. I don’t see a Christian in America as being downtrodden or oppressed. I see plenty of evidence that in the name of God, Christians have enslaved and oppressed all manner of people of color, slaughtered those of different faith or belief, and assumed that by virtue of who they prayed to all forms of wickedness were justified. There may be places in the world where a Christian has a hard time, but the United States is not one of them. You get far more shit for NOT professing that Jesus Christ is your Lord and savior than the other way around.

Apparently Michael Peace released six albums before he retired from rapping to continue his mission for God, but after one album I can’t fathom listening to the other five. The only “Threat to Society” here would be if Peace lived in a nation where Christians were in the minority as opposed to being predominant. When you live in a place where even the money in your wallet says “In God We Trust” you’re going to be just fine brother. This is the most non-threatening threat I’ve ever heard.