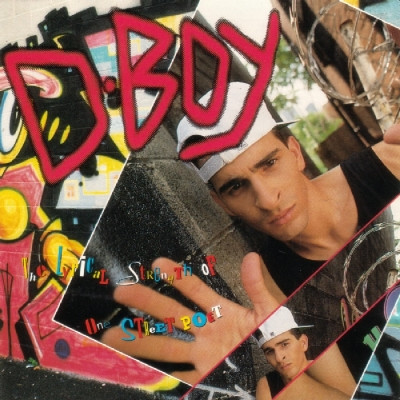 The Lyrical Strength of One Street Poet

D-Boy Rodriguez :: The Lyrical Strength of One Street Poet

It’s no secret that the forgotten stories of rap interest me the most. The unsolved murder of Danny a/k/a D-Boy Rodriguez is one of them. D-Boy was not a controversial rapper, or “Street Poet” as he preferred to be known. He didn’t brag about the many crimes he allegedly committed, flash wealth in people’s faces, or use hip-hop to launder the profits of a drug enterprise. D-Boy was a Christian rapper. That’s never really been cool or dangerous in any way, and the fact he achieved any level of recognition was probably a surprise to him. Nevertheless the single “Pick Yourself Up” off his first album reached No. 8 on the Christian singles chart in 1989, and I doubt anything other than MC Hammer’s “Pray” could have done better for a rap artist. This was enough for Frontline Records to bankroll another album.

The surprising thing about “The Lyrical Strength of One Street Poet” is how much it sounds like any rap album from the era. The beats, the scratching and the bars are vintage 1990’s hip-hop music in the best way. The Godly references aren’t hidden from the listeners, but aren’t so heavy handed as to distract from his flow or make you feel like he’s smacking you in the head with a Bible. I enjoy the uptempo rapid fire delivery of “The Boy Don’t Play” without irony. The instrumental and Public Enemy samples wouldn’t have been out of place on an Eric B. & Rakim album, and the bars aren’t terrible.

“Spreading the word, sharing your own cares
Yo special thanks to the man upstairs
You claim to love God and it seems quite funny
how your soul sells out when you see a little money
A few measly dollars, more screams and hollers
Your record went platinum, now you living taller
Smaller — see this life is but a favor
Your life is worth more than a few green papers”

You might argue it’s a little preachy, but no more so than “Self Destruction” or “We’re All in the Same Gang.” He’s simply arguing that life is more precious than material wealth, and that’s an argument I can get down with from any rapper, Christian or otherwise. In addition mentioning Eric B. & Rakim was not a coincidence, as I appreciate the drop he or his production crew (David Ebensberger, John Wirtz and Tim Miner) used from “Let the Rhythm Hit ‘Em” on “Flow Time.”

It seems like no Christian rapper can go an entire album without saying or doing at least one thing that’s corny though, and “Shout” certainly applies. The track starts off on the wrong note by trying to loop an Isley Brothers sample the wrong way, speeding it up to a ridiculous degree, while D-Boy is trying to spit the verses like a cross between Brother Marquis and Tone Loc. I realize he wanted to be Mr. Cool on the song, but the song wasn’t cool to begin with, so the normally laid back religious nature of his verses suddenly winds up right in your face hard.

“Sitting in my pew, just cooling with my Bible
I didn’t expect that we were gonna have revival
The music started pumping, yo Noogie started jumpin
(Aw yeah mayne!) The groove was so smooth that yo I had to do somethin
So I put my Bible down, and stood up to my feet
A double dose of the Holy Ghost made me kick it to the beat”

Let’s not mince words — it’s bad. Not bad enough to kill him over, but not good either. Actually nothing on “The Lyrical Strength of One Street Poet” could cause you to hate D-Boy. He can’t avoid being Godly even when he tries, but I can’t imagine who would take that much offense to it. Quite the opposite in fact when I listen to songs like “Hip Hopcracy.” I’m sure that in today’s dollars clearing samples for Kool & the Gang, the Steve Miller Band and Sly & the Family Stone would be hella expensive, but back when rap believed in the fair use doctrine it was easy to make funky ass shit like this.

So what happened to Danny Rodriguez? Well you better call up Cold Case Files and ask Bill Kurtis for his opinion, because 30+ years later we still don’t know why he was shot and killed. He stepped outside of his East Dallas apartment and never saw the bullet coming. Was it a case of mistaken identity? A botched robbery? Payback for some minor slight when he scuffed up someone’s shoes? You can throw out a million theories but it doesn’t seem like any detective working the case had one that would stick. Nobody has been tried or convicted for his death and even though some cold cases do eventually get resolved thanks to DNA evidence or a witness coming forward, it seems highly unlikely to happen after this long.

The irony of D-Boy calling for people to put the guns down and “cease for peace, for a much better future” isn’t lost here. He wouldn’t be the first or the last rapper to call for an end to the endless cycle of violence and then become just another victim of it. Frankly that’s depressing if you dwell on it. What’s not depressing is “The Lyrical Strength of One Street Poet.” It’s a little too earnest at times, but if being a humble guy with strong moral values is a bad thing, I think more people could be as “bad” as D-Boy and the world would be improved by it. If you’re in the mood for the strength of street knowledge, D-Boy Rodriguez won’t match your attitude, but if you want some funky rap for the 90’s with a little positivity, this is your man.