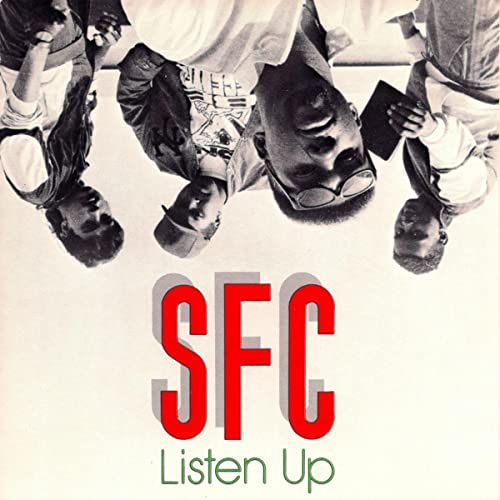 There’s a saying among retro gamers that just because something is rare or valuable doesn’t mean it’s good. In fact more often than not the opposite is true, because really terrible games that didn’t sell many copies are the ones that are the hardest to find. When I saw that physical copies of S.F.C.’s “Listen Up” were selling for over $100, I was immediately suspicious that something similar was afoot. One listen to the title track confirmed it.

Despite the lack of any Wikipedia entry to confirm this, it wasn’t too hard to figure out that S.F.C. means “Soldiers For Christ.” I want to be clear that the fact S.F.C. are cornball goody two-shoes for the Lord isn’t the only problem here. In fact there are many perfectly competent Christian rappers, and a few that I would even classify as “above average,” but those same rappers don’t offer the simplistic platitudes of songs like “Drugs.” Not only does it come across like one of those corny public service announcements we had to sit through on network TV in the 1980’s (no coincidence this album is from ’89), the track itself is incredibly poorly mastered. Random popping noises and beat skips show that some studio engineer had (A.) no clue what he was doing and (B.) recycled fourth generation quarter inch tape without demagnetizing it first. The monotonous instrumental is horrendous too.

“Every single day, you see people cold pass away, from what? DRUGS.” No shit. Every single day, some people die from something. I’d rather not go on to a lengthy screed about how more people die in the war on drugs and how it fueled the rise of the violent cartels who profit from illegal drugs, but S.F.C.’s rather simplistic “drugs are bad mm’kay” take just doesn’t cut it. Simplistic takes are all that these Soldiers For Christ have though, and “Dope Dealer” is more of the same — this time warning women that flashy dressed street entrepreneurs will lead you down a dark path. Ooh, scary.

These are nursery rhyme level lyrics even if I’m being generous. “I don’t know if he told her so/but a dope dealer’ll never let you know.” Wow G, that’s some deep bars. Moments later the Soldiers F.C. start singing their raps to the tune of “hello muddah, hello faddah,” and now I regret saying these were nursery rhyme raps because that’s an insult to nursery rhymes. I kept searching far and wide for something to redeem these Christians, and the faux Jamaican fakin’ of “Brothers & Sisters” certainly wasn’t it.

Nor was their poor attempt at an uptempo track called “Mr. Brain” that starts out by telling you “God is love” for about a full minute. Any DJ who spun this track would undoubtedly drop the needle after the sermon… and then quickly pick it back up when they realized how boring the track was.

“I want to be heard for spreading the word of Jehovah.” That’s fine. Why don’t you grab a portable speaker and a microphone, stand on a street corner, and spread the word there? You didn’t need this Quixotic album to do it, tilting your rhymes at the hedonistic world you disdain so much. I haven’t heard many rap songs that I’d call “anti-intellectual” but “Mr. Brain” might as well have been written by a climate change denying anti-vaxxer. When S.F.C. promises that there’s “No Stoppin” I can only wish they’d pump the brakes immediately. “When I say Soldier I mean to the extreme/because I’m not compromising for anything.” A life of no compromises only leads to a life of never-ending conflict. That’s no way to live.

“We’re getting hyped for Christ you see.” Fellas, did not one person in the creation of this (*cough*) album tell you just how out of touch this was? You’re getting HYPED, for CHRIST. That’s the 1989 equivalent of “How do you do fellow kids?” Everything about this is repugnant. I can only imagine the people dropping a full Benjamin for “Listen Up” are doing so just so they can brag about owning a rare CD. That’s fine. Put it in a case and put it on a wall then. That’s where it belongs. It doesn’t belong in a CD player, a MP3 player, Spotify, or anywhere near your ears.