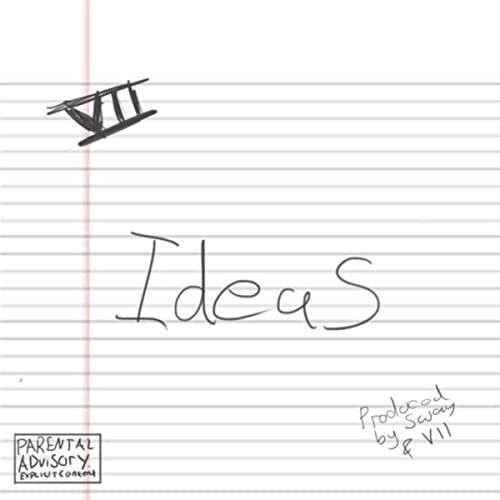 Have you ever wanted to listen to the opening track of an album where two guys giggle at their own jokes whilst sitting in a busy coffeehouse that’s playing classical music? Then BOY do I have just what you’re looking for.

“That’s going on Soundcloud how it is” says the intellect behind “Ideas,” an album whose cover art immediately fills me with dread. It looks like an episode of Homestar Runner’s Teen Girl Squad, only that idea sprung from a cartoon character making fun of a viewer’s email by purposefully drawing something inane and bad. I suppose that’s appropriate because songs like “One Hitter Quitter Wigsplitter Lighitter” seem purposefully bad too. Are they though? It’s hard to tell whether or not we’re supposed to be taking VII seriously or having a laugh at his expense. I think he’s serious because he’s trying to teach us his slang on the track: “If you’re confused of the meaning of this word you never heard/take a second to learn it and rotate in your verbiage.” Don’t think I’ll do that mate but thanks all the same.

“I’m happy to take one for the team/and suffer the effects of sick weed/and be retarded if it means we’re keeping the streets clean.” Maaaan, putting aside the questionable usage of the word “retarded” these days, I’m not sure I’d be talking about things occurring in the future if I was VII. The song is as unlistenable as anything I’ve heard in quite a while. His flow is all over the map, the beat attempts and fails to mimic grime, and his obsession with getting high hardly justifies creating a track. That pales in comparison to “Man Flu” though, which is the reason I even stumbled onto this album.

If you have never seen the Memeulous video called “The Worst Rapper on Earth” where he describes an artist as “having the biggest stroke in history” then you should take a moment to go enjoy it. Go on, stop reading this review for a moment, it’s worth it. Here’s the rub — VII apparently created the persona 7K Tha God to mock mumble rappers, and clearly that’s what he’s doing on “Man Flu” too, but he’s not that much better than what he’s shitting on. I get frustrated with AutoTune emcees at times myself, but at least they do have songs that actually sound like MUSIC. When VII asks “Why Am I Doing This?” it is unintentionally appropriate. The clearly self-produced track sounds like he randomly punched notes into a sampler and looped it, and when he says “Every day I get people telling me that I’m the best” I wonder why people are gassing up a mediocre rapper that much.

“I spit sick so I can get the respect.” Well I’ll give VII this much — he’s trying to. I don’t believe he’s genuinely trying to be piss poor, but I think he’s working with a budget of negative infinity and trying to do way too much. “Why do I spit? I guess I really don’t know.” Bro, you should figure that out before you make a whole album. His only topics seem to be how fucking awesome he is and how much weed he smokes — or the fact that he should take a break from smoking so much weed. Nah man. “I Feel” makes me feel the opposite. Smoke more, rap less.

I’d like to tell you “Ideas” has some good ones, but that wouldn’t be true. VII’s best idea was getting a YouTube channel to take his parody of mumble rapping seriously and make fun of it, but if he meant for that to drive people to his real music, that’s just not going to work. He’d actually have been better off taking the 7K Tha God meme and running with it, because like the aforementioned Teen Girl Squad, it could have spun off from being a one off joke into an entire series in its own right. I honestly feel a little sad about coming down hard on “Ideas” because I think VII’s heart is in the right place and if he had people helping him he’d make something decent. Not great, not even necessarily good, but at least a passably listenable LP. This one however is not worth playing twice.