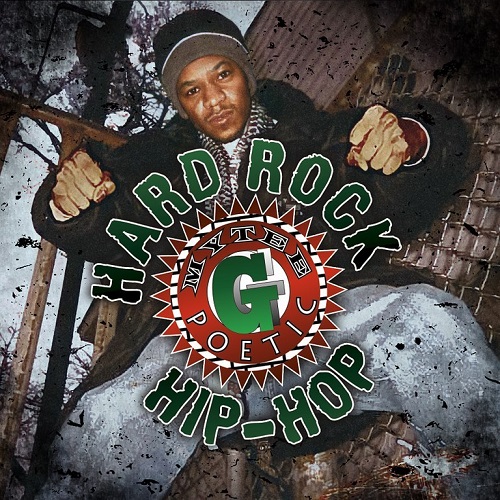 Hip-Hoppers, raise your hands if you recorded several albums worth of songs but never actually put out any.

Gee, that’s a lot of hands going up.

In reality, it’s rarely ever that bad. Because eventually, provided the artists were proud of their work and convinced the world needed to hear it, the music found its way to some kind of audience, as tapes sold out of car trunks, CDs handed out outside of venues, copies distributed by CDBaby or streams and downloads made available on pioneering platforms such as MP3.com or MySpace. Even a major player like Apple’s iTunes still boasts a wealth of releases that suddenly surfaced from a commercial or private vault.

G’Poetic is among those DIY hip-hop artists with a halfway researchable discography. He’s also been the subject of limited edition collections of older unreleased material when he went by Mytee G. Poetic. 2021’s “Hard Rock Hip-Hop” followed 2018’s “Com’n Wit Nuff Ruffness”, and in its liner notes, G’Poetic talks to longtime online record-keeper Werner von Wallenrod about more unheard music. Including material recorded at The Hit Factory in the late ’90s and more in partnership with New Jersey’s own Kool & The Gang (also making an appearance on their “Gangland” album).

While G’Po lives in Cali these days, on this “Hard Rock Hip-Hop” collection the timestamp and geotag are unmistakably ’90s and East Coast. The recordings span in fact from 1991 to 1999. The majority of the material came after the songs on “Com’n Wit Nuff Ruffness”, between 1996 and 1998. A number of tracks feature Caspa The Apparation, such as “City Slicka Style” from ’96, which shows G’Poetic in a relaxed and optimistic mood: “Tryin’ to establish a lifestyle that’s lavish / as I dine on a Caribbean dish of cabbage and fish / I flip English, politickin’ like Newt Gingrich / tryin’ to get rich though life’s a stink bitch”.

Fast forward two years and disillusion seems to have taken hold of the MC. “Soulja Story” is one of those hip-hop tracks that have a martial make-up but where the glory of war is only a faint echo and the protagonist is more war-weary than anything else:

“I pursued my dreams and got nothin’ but strife
So I said fuck it and just stopped lovin’ my life
I’m sick of freestylin’, I want cash to perform
I storm the platform sportin’ Phat Farm”

“Going Legit” references B.I.G. and LOX lyrics at a time when Bad Boy had the greatest say while Mytee denounces “other rap guys” who “just ride Big’ and Pac’ dick” on “Consignment”, a posse cut that also calls out rappers who have a drug dealing past as their main selling point. Essentially, underground troopers like Mytee G. Poetic, Kasshus Qwon and Mr. Rich saw themselves as the underdogs who not only challenged the top dogs but to a certain degree also what they stood for: “We can battle for your platinum plaque, your crack, or your Bentley”.

While the Vailsburg/Ivy Hill representative could not benefit from hip-hop’s indie boom of the late ’90s, some aspects of his music connect him with more famous peers. There’s a, for lack of a better word, esoteric dimension to the lyrics. Sadly, under the impression of years of conspiracy lunacy, some emotive terms that he drops are harder to stomach nowadays. The real problem however lies elsewhere. True, rappers were winding up the doomsday clock at the time, but somehow they still managed to make powerful, energetic music (Busta Rhymes, DMX). In a less fortunate case like the one at hand it can feel like escapism into obscure, occult topics. The MC seems to be aware of it himself, admitting that he’s confused: “This world got me stressin’ and I need a vacation / In my room with boom and a PlayStation”.

Mytee G. Poetic’s philosophy can be traced to his developmental period. 1991’s “Wise Up” builds on an evident Rakim legacy with rhyme structures borrowed from the Flavor Unit and Lord Finesse. The catchiest tune, “High School Days” from 1993, is not just one of those humorous flashbacks, it also relates a coming-of-age moment, when the student found himself at a turning point: “I wanna cop out and be a drop-out / But if my moms hear that her eyeballs are gonna pop out”. So he starts to educate himself: “I just chill and relax and begin to study facts on blacks / So I bought stacks of books and pamphlets / and pro-black rap hits, that gets me heated”. From there he plans to “kick positive raps” himself. And that’s how a deceptively joyful rap about school years turns into a conscious rapper’s origin story.

By 1993 Mytee was already deep in the trenches defending his passion. Pointing out ignorance, vanity and wickedness, he raps frantically over early producer Mixture’s sleak uptempo raid underscored by icy horns on “State of the Art”: “I’m too smart to let hip-hop fall apart / So I plan to change the state of the art”.

You could write a book about rap artists’ failed aspirations (and rest assured they would include the genre’s biggest names). Even if it’s just about material success, there are so many factors in the equation for things to pan out. Especially acts from peripheral places sometimes are dependent on the right connections. Looking at Jersey, Redman needed Erick Sermon, Artifacts needed Buckwild and T-Ray, Chill Rob G and Lakim Shabazz needed the 45 King and Poor Righteous Teachers needed Tony D.

Mytee G. Poetic was early on working with future Fugees collaborator Rashad Muhammad and “Discovery Zone” (’96) was produced by Frankie Cutlass (who had a potent guest list on his own album from the same year). But outside of “High School Days”, the polished gem “Ghetto Children” and the angry protest against police harrassment “Hard Rock Hip-Hop” hardly anything grabs your attention if you’re not already concentrating on it. The MC is extremely focused on rhyming and is fairly good at it but lacks that nonchalant attitude towards it that Lord Finesse or Big L possessed. Overall, he’s not on the level of his namesake Poetic from the Gravediggaz, a comparison that suggests itself not only because of the similar names. And if you plant Poetic into your own ’90s rap universe, he’s up against enormous competition.

It’s hard to not be sympathetic towards Mytee G. Poetic after having heard his hypothetical debut album “Com’n Wit Nuff Ruffness”, and “Hard Rock Hip-Hop”, while less polished sonically, is stringent in the context of how things would develop. The songs mirror, if you will, underground (some then would have said ‘real’) hip-hop in the ’90s. Recommended if you previously bonded with “this Newark ghetto journalist” or take a special interest in lesser known ’90s indie rap.