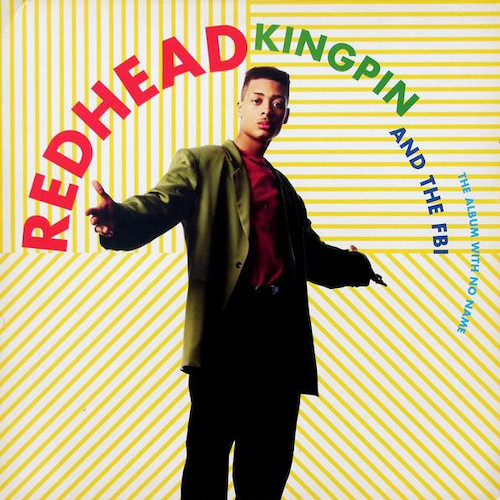 The Album with No Name

Redhead Kingpin and the F.B.I. :: The Album with No Name

I’d love for someone to prove that I’m not the only one who cares about Redhead Kingpin and the F.B.I., but in the twelve years since I reviewed his first album, nobody asked me to cover the second. Not a single soul. It’s not as though he wasn’t a major artist in his heyday between the late 1980’s and early 90’s. He was signed to Virgin Records, worked with renowned new jack swing producers, and eight of his singles hit the Billboard charts when released. “Pump It Hottie” got as high as No. 2 on the US Rap/Hot Rap Songs list. Despite that success he was seemingly all but forgotten before this one shoutout from Nasir Jones.

Suddenly people were talking about Redhead Kingpin again — at least for a minute. I reviewed “A Shade of Red” in the wake of that brief resurgence, but the tide definitely turned. I’ve tried since then to piece together why rap fans and hip-hop historians alike just don’t give a damn, and “The Album with No Name” has given me some insight. When I look at the credits for the album they note “mixed by: Redhead Kingpin” and “produced by: Redhead Kingpin.” Instead of relying on Markell or Teddy Riley, the men who brought him to the dance, Kingpin said “Nah G, I got this.”

The single “It’s a Love Thang (Word)” isn’t strong enough to support that assertion. It’s aight, but it don’t mean a thing if ain’t got that swing. Other singles suffer by direct comparison to other rappers who used the same samples. The mellow and smooth loop of “Blind Alley” that made up Big Daddy Kane’s “Ain’t No Half Steppin'” completely owns Redhead Kingpin’s sped up distortion from “We Don’t Have a Plan B.” Once again it’s not “bad” as such, but when LL Cool J’s silly “Pink Cookies in a Plastic Bag Getting Crushed By Buildings” is a better song than yours, you played yourself.

The longer you spend listening to “The Album with No Name” the more apt the title becomes. There’s no “Pump It Hottie” or “Do the Right Thing” here. The Kingpin was a decent rapper with very good production on his debut LP, but on his second album he was an average rapper with average production. He brought in a few guests here and there to try to liven things up, but the only song among them that impresses me is “Dave & Kwame (Gimme Dat Girl).” It’s actually a battle rap of sorts with Kingpin making fun of Kwame for his polka dots, beating the late great Notorious B.I.G. to the punch. It’s unintentionally humorous that Kwame reached “Where Are They Now” status himself, something neither man could have predicted at the time. The “More Peas” sample may be one of the most recycled in rap history, but Kingpin didn’t damage it the way he did “Blind Alley” so it’s a pleasure to hear that bass on this duet.

It’s a shame I can’t say the same for the Earth, Wind & Fire sample of “3-2-1 Pump.” I’ll let his Trouble Funk sample slide, but I’d rather hear the original “Let’s Groove” than Kingpin’s attempt to mimic Teddy Riley. That’s the thing about new jack swing — you either have the ear for it or you don’t. Kingpin picks elements that should work, but he doesn’t manage to pack the punch with them he should. It’s like giving a race car to a grandmother and telling her to go win the Indianapolis 500. It doesn’t matter how good the engine, the tires, the brakes or the aerodynamics are if she can’t drive it properly. His stilted rap does his unimpressive sampling no favors either.

I’m going to damn “The Album with No Name” with faint praise by saying it doesn’t suck. I know I’ve been a bit harsh here, but that’s because it’s a huge letdown compared to “A Shade of Red,” while it’s actually much less of one compared to some of the truly terrible albums of the era. His debut LP was lightning in a bottle though, while the sophomore slump hit hard and left his record no higher than 182 on the Billboard Top 200. That’s a flop, and not an undeserved one either. He ignored what worked to make him a star in the first place and in his foolish pride believed he could do it all himself. Redhead Kingpin quite literally engineered his own demise.

Redhead Kingpin and the F.B.I. :: The Album with No Name
6Overall Score
Music6
Lyrics6