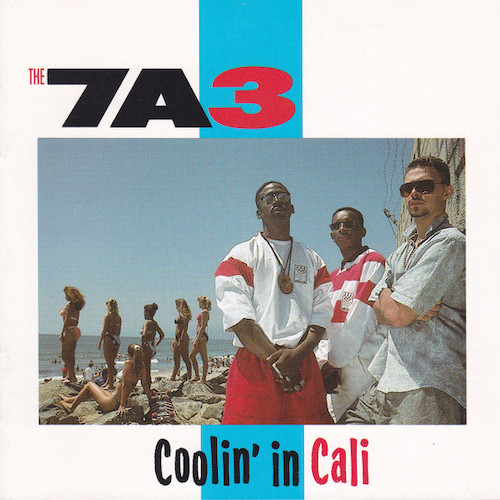 There’s a wry irony to “Coolin’ in Cali.” The 7A3 might have been completely forgotten by history were it not for one fact — their DJ was Lawrence Muggerud. Before Cypress Hill, before Soul Assassins, there was the odd coincidence of three New Yorkers from Brooklyn and Queens moving to and releasing their debut album in California. If it weren’t for his stint in this crew it’s arguable DJ Muggs wouldn’t have gone on to be the superstar rap producer we know him as today. Everybody gets their start somewhere and Muggs got it by playing sidekick to emcee brothers Brett B (Brett Bouldin) and Sean B (Sean Bouldin). On songs like “A Man’s Gotta Do What a Man’s Gotta Do” he’s the comic relief in a tight situation, helping them escape a fan instigated riot by screaming “Let’s get the fuck outta here!”

There’s an even bigger irony though when you consider that the single that put them on the map isn’t included on their debut LP. “7A3 Will Rock You” was undoubtedly a hit for the fledgling Cali by way of NYC rap group, but the chance of it having any life beyond a 12″ single comes down to the sample of Queen’s “We Will Rock You.” Was it authorized and cleared? Probably not. This was the wild and free 1980’s after all, where lawsuits like Gilbert O’Sullivan vs. Biz Markie had yet to change the landscape of sampling as we know it. It’s hard to imagine this song’s success didn’t catch the attention of Freddie Mercury and his band though. They certainly weren’t oblivious to Vanilla Ice using “Under Pressure” a few years later.

It’s not the only song 7A3 was well known for that’s absent from their album. The group recorded “Mad Mad World” for the Colors soundtrack and that absence is probably more due to timing than sample clearance. Still when I listen to the song I immediately notice the use of James Brown’s “Papa Don’t Take No Mess,” which would also feature prominently in Kool Moe Dee’s “How Kool Can One Blackman Be?” and (now here’s some REAL irony for you) Biz Markie’s smash hit “The Vapors.”

If you’re wondering why I’m so focused on samples in this review it’s because “Coolin’ In Cali” is one of the most unapologetic examples of 1980’s looping for rapping at its finest. You can’t even get through opening title track without hearing Sly & the Family Stone’s “Stand!” And yes — that’s the exact same break that Kool Moe Dee looped for “Rise and Shine.” Are you getting what I’m laying down here? Before the whole music industry got bogged down with artists from the last generation trying to skim money off the success of the rap generation, you could jack the Commodores’ “Slippery When Wet” without fear of a record label’s lawyers coming after you.

Of course “Everybody Get Loose” also samples from the Wild Style soundtrack, which just goes to show that rap in the 80’s wasn’t afraid to sample both outside of hip-hop and from within the genre. Rap music has always been self-referential, both in terms of emcees referencing each other by recycling lines to deejays scratching those lines into the hooks of songs. At this early stage of the game you can see Muggs learning the turntablist side of things while other people like Jazzy Jay and The Butcher handle the production on songs like “Express the Mind.” One again I’m struck by how universal and free sampling used to be as I immediately recognize the same saxophone sample EPMD used for “I’m Mad.”

As for the lyrics of Brett B and Sean B? Well they’re pretty typical for the 1980’s too. They’re not whack, they’re not standouts, they’re just average brag rappers with a hint of attitude while occasionally “speaking knowledge.” Their NY roots are betrayed by songs like “Drums of Steel” where the measured delivery and cadence of the flow winds up sounding incredibly similar to Run-D.M.C. I can imagine to some this ends up dated and corny, but hearing them refer to Muggerud as “Grandmixer Muggs” puts a smile on my face as does the steel rhythms echoing on the song.

The album reaches its pinnacle of seriousness on “Lucifer,” which also happens to be the album’s finale. The “Son of Shaft” sample brings to mind one other song immediately for one last time — Public Enemy’s “Caught, Can We Get a Witness?” I can think of no better way to summarize The 7A3 than that — a 1980’s rap creation through and through slavishly devoted to the art of flowing to the best tracks possible. While Sean and Brett broke up the group after they failed to reach new heights with this album, both went on to successful careers as music industry insiders, and we all know what DJ Muggs went on to do. This forgotten gem is a time capsule of 80’s rap music and a not-so-subtle reminder that the East and West coast really aren’t so different after all. We all love hip-hop no matter where we got our start.