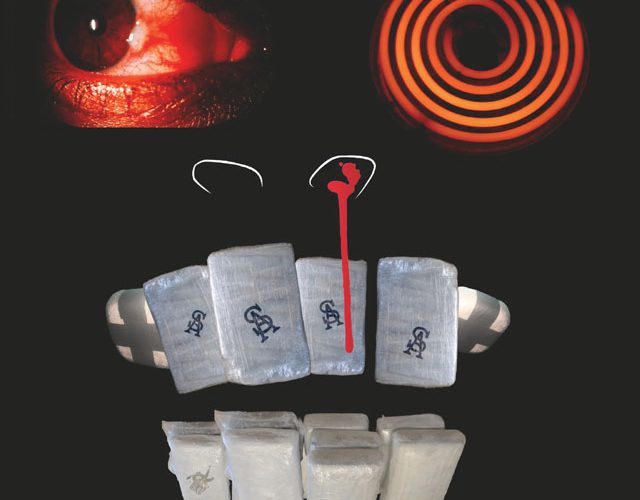 Legendary Cypress Hill producer DJ Muggs and New Jersey emcee Crimeapple are no strangers to working together. They’ve previously collaborated on “Medallo” in 2019 and “Cartagena” in 2021. Crimeapple’s known for both rapping street narratives and collaborative efforts, and “Sin Cortar” is no different. But the twist to this album (the title of which translates to “uncut”) is that the entirety of Crimeapple’s raps on this album are all in Spanish. Despite the preference for English rhyme schemes, Crimeapple spits in his ethnic tongue very well. The language barrier may pose a challenge for some listeners, but if you took at least some Spanish during your high school years, you should be fine. It’s worth noting that rappers sometimes position themselves in group circles, ciphers, to showcase their rhymes. Ironically, “Sin Cortar” actually requires listeners to be ciphers themselves. That is, to decipher the lyrics in terms of translation and meaning.

Muggs tinges his production with samples from Latin music and vintage movie dialogue, and starts the album off as such with “Manteca Mambo.” It’s drumless, but Crimeapple raps over it well and shouts out Muggs for the production in the hook. “Nada Era Facil” also contains no drums, but is driven by a blues guitar riff. Crimeapple sums up the lyrics when he raps “Ustedes esta confudidos: Nunca Era Facil, todo fue defciil” (“You’re all confused: Nothing is easy, everything is hard”). The production picks up somewhat with snares and menacing piano keys on “Lucas Y Monica”, a Bonnie & Clyde-esque crime story stretching from Colombia to Mexico. The accompanying music video shows both producer and emcee enjoying the fruits of their labor with a day at the races:

Even on the tracks where the titles are plain English, Crimeapple still spits in Spanish. On “Amnesia”, he’s “fumando in chancletas” while the production initially provokes thoughts of The Alchemist. The syrupy, dark bass sounds like him, which is only natural since DJ Muggs taught Al how to create beats in the first place. “Todo Bien” contains the kind of heavy drums that truly get the production out of its stale rut with Muggs’ “assassins” vocal signature prevalent. The lead single for the album, “NBA”, is similar with its hypnotic keyboard samples. In the single’s video, the displays of cars and women are symbolic of Crimeapple’s line about how he and his crew “no somos baratos” (i.e.: “we ain’t cheap”):

The album isn’t without guest stars, though. For the penultimate tracks, the hotboxing anthem “Window Down” features Lou Fresca (aka “Lil’ Supa”) while on the organ-sampling, metal snare-thrashing “Asesinos”, Sick Jacken makes an appearance. Both guest emcees take their cue from their host and rap their verses in Spanish. The final track, “Botellas de Guaro”, contains perhaps the smoothest production on the album and with airy electronic samples interspersed between speakers. The “Sin Cortar” album title not only references the cocaine bricks on the album’s cover, but also the lyrical nature. Crimeapple refused to cut his part with any English and gets commendation for going with it for a full measure.