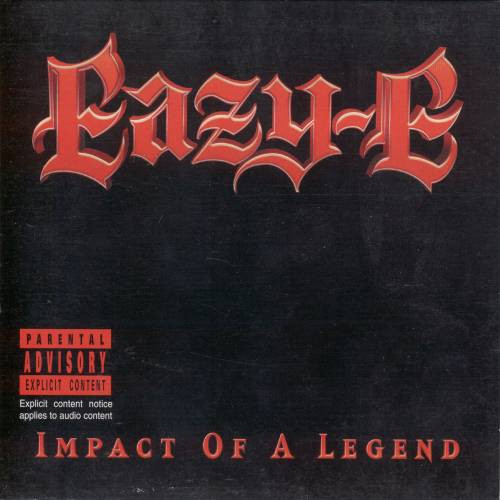 Impact of a Legend

Eazy-E :: Impact of a Legend

“Impact of a Legend” was released seven years to the day of Eric “Eazy-E” Wright’s untimely death on March 26th, 1995. The title of the album befits Eric’s status as a West coast O.G. and was far from the only tribute to him around that time. The “Eternal E” compilation had an equally fitting title, but the selection of tracks on it didn’t seem to do him much justice. Perhaps that’s why I skipped over this EP at the time, which reportedly contained tracks culled from “Str8 off tha Streetz of Muthaphukkin Compton.” I can easily put myself in the mindset of not wanting to be disappointed twice.

Unfortunately my suspicions about the quality of “Impact of a Legend” back then would have been accurate. If these are the final unreleased recordings of Eazy-E, they’ve been chopped up into the smallest bites you could possibly sink your teeth into, then a bunch of rice and filler was added to it to make it stretch. Take a song like “No More Tears” for example. E’s in and out with a short verse that’s recycled as the hook (even though said hook doesn’t mention “tears” at all), then a slew of unknown Ruthless rappers named Phalos Mode, Sacraphyce and The Genie spit unmemorable bars. Did Wright know these people while he was alive? Unlikely. Did they go on to do anything after this release? If you didn’t recognize their names while reading this review you already have your answer. 20 years have passed and they haven’t done shit.

“Eazy 1-2-3” has a little more charismatic performance from Wright (and more than one verse). This time the guest stars are Loesta and Phalos. Despite Loes issuing complaints that he “jumped in the game and bitches slandered my name,” you can’t slander what no one is talking about. In addition it’s clear that the verses were recorded long after the “Str8 Off” sessions when there are lines like “for the name of Eazy, niggaz get sprayed.” Yeah, that’s posthumous as fuck. It’s hard to take what’s offered here as unreleased Eazy-E tracks when it’s so obvious they’ve been spliced together long after his passing by any means necessary.

The eight tracks from “Impact of a Legend” are padded out by an “Intro” and “The Rev Skit,” meaning 25% of these new songs aren’t even songs at all. The one song I might believe is an actual collaboration done with E during his lifetime is “Still Fuckem” since one of the three guest rappers is Paperboy of “Ditty” fame. David “Rhythm D” Weldon provides the kind of slinky bass that even sounds like E circa “Real Compton City G’s.” If there’s one and only one reason to bother with this album, this is the track.

The truth is it’s far more likely people bought this EP for the “bonus” DVD, which contained classic Eazy-E music videos like the aforementioned “G’s” along with “We Want Eazy” and N.W.A.’s “Straight Outta Compton.” If I could rate the DVD alone I’d give this an 8 out of 10, but unfortunately that’s not how it works. Sold separately that would be fine, but packaged together as an album, the final songs of Eric Wright are nothing like he could have imagined. To say he’d feel disrespected though is going a bit too far. The truth is E was such a G he probably wouldn’t give a fuck. He’d laugh about it. Eric Wright lived and died doing what he wanted, when he wanted, never worrying about the risks until they finally caught up to him. It’s not a lifestyle worth copying but it was sure an entertaining one to watch.