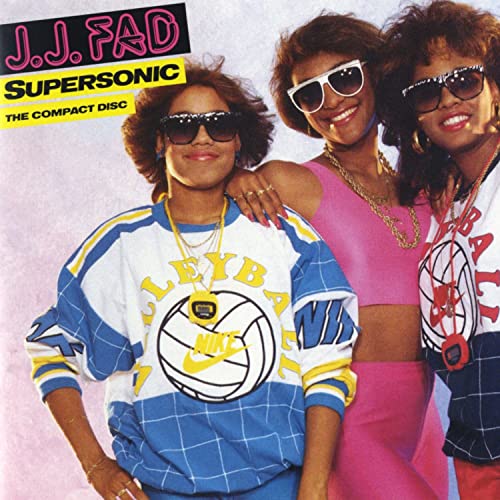 “See the J is for Just, the other for Jammin’/the F is for Fresh/A-D, AND DEF“

If the intro to J.J. Fad’s biggest hit “Supersonic” sounds familiar, you might remember a sample of it from MF DOOM’s “Hoe Cakes” off “Mm.. Food.” If you’re older though you may remember when “Supersonic” was a full album featuring said same song. Lesser known is that the group’s name was a retcon. Originally JJ FAD was named for the FIVE women in the group — Juana, Juanita, Fatima, Anna and Dania. Eventually three of the five got fed up with the way things were going, leaving only Juana (MC J.B.) and Dania (Baby D) in the group, but the two were not deterred in any way. They recruited Michelle Franklin (Sassy C) and DJ Train (later of C.P.O. fame) and remade “Supersonic.” Much like their titular hit, the songs of “Supersonic” were techno electronic raps like “Blame It On the Muzick.”

This song was produced by Dr. Dre and features him talking all over the track, allegedly using the magic of his production to make a reluctant wallflower come alive and dance. He ends up being credited for 40% of the production on “Supersonic” as a whole, but it sounds less like N.W.A and more like World Class Wreckin’ Cru. If it’s true that Andre Young can’t escape his disco rap shadow, J.J. Fad can’t escape their OWN shadow either. “Eenie Meenie Beats” might as well be called “Supersonic Part Two.” They even say the same lines from their hit. It’s all rearranged with a slightly different instrumental set to the exact same tempo.

Not content with copying their own hits, J.J. Fad went on to copy LL Cool J’s “I Need Love” for “Is It Love.” You have to at least give them some credit for honesty. The song’s title and the track’s production make it absolutely clear what they are doing. There’s no attempt to hide or obfuscate the inspiration for this single. LL’s hit came out in 1987, this album came out in 1988, it’s a slam dunk open and shut case.

It’s a shame to look back on “Supersonic” given the missed potential here. Female rap groups were fairly rare aside from Salt-N-Pepa, who had only broken through in a major way the year prior to this album. In fact I have to suspect the only reason Eazy-E pursued J.J. Fad for Ruthless Records was so the label could have their own West coast counterpart to what had already worked out East. That’s part of the problem though?! On the rare tracks like “Now Really” that don’t sound like club songs, the beats and rhymes turn them into Cali-Salt-N-Pepa instead of letting them show off their own Cali swag.

If you think I’m kidding about that listen to “Time Tah Get Stupid” and tell me you don’t immediately hear KRS-One rapping “Criminal minded, you’ve been blinded/looking for a style like mine, you can’t find it.”

Oh dear. J.J. Fad had no ideas of their own, and nobody producing or executive producing “Supersonic” had any either. It might have been better just to let “Supersonic” be their one smash hit and let everyone be on their merry way, but no one was content to stop there. The album is only a half hour long and still feels excessive. Whatever nostalgic feelings you have for their hit single quickly fade over the full length of “Supersonic” and make you wish all the people involved had tried a hell of a lot harder. They HAD something but just didn’t know what to do with it.