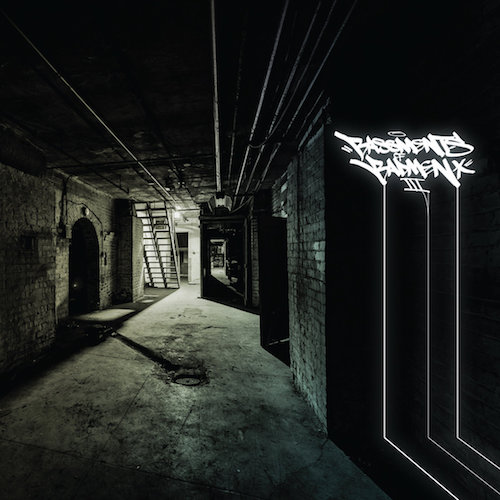 Well over a decade ago my colleague Matt reviewed "Bassments of Badmen - Volume 2," a compilation album from the fine folks at Hand'Solo Records. If you've noticed their name recently it's not a coincidence that we're reviewing "Badmen 3" - they saw our recent "Magnus Opus" review and hit me up. The long and short of Hand'Solo (besides the obvious Star Wars pun) is that they're a Toronto based indie which launched TWO decades ago with the first "Badmen" compilation. Let's take a moment to recognize any indie label that lasts more than a few years let alone almost a quarter of a century. That represents a lot of hard work, hustle and sensible management. Props earned, props given.

Matt had some concerns on the last "Badmen" compilation, walking a fine line between praise and criticism when he describe the roster of artists as "a parallel hip-hop universe the average hip-hop listener is sure to get lost in" and "difficult music it takes time to digest [...] that doesn't tolerate the slightest distraction." That's an understandable dichotomy for any hip-hop reviewer - we appreciate the independent artist willing to push the artistic envelope while recognizing that may limit its appeal to listeners weaned on mainstream hip-hop outlets. I think it's fair to say that a "Badmen" comp might not appeal to your die-hard Hot 97 or Shade 45 listener, or to a fan of artists like Future and Travis Scott. Matt even went so far as to describe some of their raps as "nerdy antics."

The world has changed a whole lot since 2003 though and "nerdy antics" aren't nearly as fringe as they used to be. The internet hasn't completely broken the monopoly of mainstream media providers and probably never will given that those same providers have adapted to compete in the areas indie boutiques excelled in - digital distribution, limited editions, pop-up stores and word of mouth sales. I'm not trying to get all "conspiracy theory" about it but it's fair to say some of your favorite indie artists and labels really aren't that independent any more, just like that "microbrew" you're drinking is probably owned by either Anheuser-Busch InBev or SAB Miller (which will soon be part of A-B anyway). The point is that large corporations have to act like small ones just to appeal to today's more discerning consumer, and that diversification of the audience has given once fringe "nerdy antics" a larger voice in the consumer diaspora. While some will bemoan the "hipsters" and "millenials" who invaded these once inaccessible anti-mainstream spaces, it's not like I didn't hear those exact same arguments about "gen Xers" in the 1990's from those who gave birth to hip-hop in the 1970's and 80's. History repeats itself.

Now there are some lines even I as a self-described "hip-hop nerd" feel that rap can cross into being cornier than a bag of corn nuts. Epic's rap on "Tourist Trap" crosses that line. The track Aries provides him isn't bad actually - it's a head nodding, folksy acoustic guitar backdrop, something you could imagine Aesop and Sandman rapping comfortably over without it being a stretch. The problem is that Epic is either purposefully flowing badly because he's putting on a "ha ha look how nerdy I am" front or he really is that terrible. I'd like to generously assume it's the former, but if so the joke is too obvious for its own execution. Fellow Canadian Jon Lajoie can pull it off, whereas Epic seems just a little bit too sincere. "You're a mark for pickpockets if you dress like I do... don't like Saskatoon rap I'll take it back to the streets... an old man hat shop and at the tourist trap/they wouldn't believe me anyways if I said I used to rap... put my head down so I can go for a nap." It may seem unfair to randomly pick out silly lines, but his dreary half-hearted delivery could be rearranged in any order (these were chosen sequentially) and it would sound the same. If he's bad on purpose fine, but even as an in-joke it's still not any fun to listen to.

These kind of songs are the exception and not the rule though on this massive two hour plus album. You'll recognize some familiar artists and samples throughout, such as D-Sisive on 5.1.9.0.2's "All I Know," flowing over a sped up version of AC/DC's "For Those About to Rock." I salute them. You'll recognize some familiar producers like Fresh Kils as well, who teams with Crate Crusaders for the turntable licks "out the funk bag of tricks" and rap trio Roshin, Ambition & TassNata for bars hitting "Harder Than a Brick." These two tracks alone would make this compilation worth your time. There's so much more in this bag though. Moka Only takes you for a ride in his "Food Truck," Eternia spits some truth on "For This Life," and long time Hand'Solo recording star Wordburglar spits some hard bars over the Beatmason produced "So It Flows" (cuts by Uncle Fester). From familiar Canadian underground rappers like Chokeules on "Murder Monday" to the ones I've never heard of like Birarpres on "Stabcabinmanitoba," there's plenty of hip-hop antics on "Badmen 3" and not all of them are nerdy - as the last two tracks indicate they can be DEADLY serious. The excessive length of "Badmen 3" is understandable given they are celebrating two decades as a label and deservedly so, but the sheer size is going to be intimidating to some potential buyers and/or listeners, which makes me think this idea would have been better served if they split it up into two different volumes. The problem is there are too many songs on it I wouldn't want to cut. Nope. "No Other Way" by Moka, More Or Les and Fresh Kils has to stay. So does "Put It On" by Mer & Rayne Drop. I'm not gonna toss "Stardust" by CRUNK23 (Noah23 & Crunk Chris) either. Really the only track that I outright hate is "Tourist Trap" and that's just a shame for Epic. Sorry dude, I don't get you, and your rap style is terrible. "The Pants Kids Wear" doesn't get high praise either - I might have chopped it. From darkly ominous tracks perfect for the Halloween season like Prime Conspiracy's "Under the Influence" to purposefully nerdy cuts like "The End Is Nigh" by Primordial Emcee though, more of "Badmen 3" works than doesn't, which is as remarkable an achievment for a two hour album as their two decades of existence.