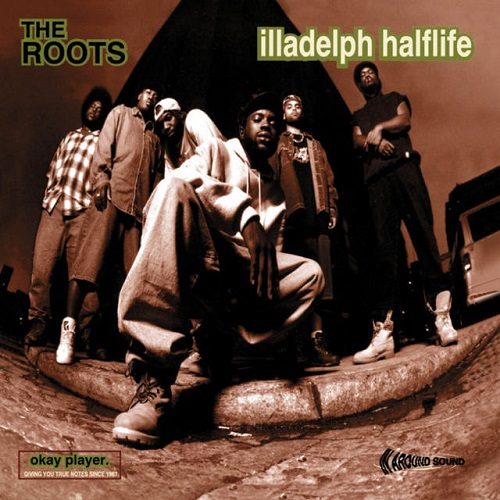 If you haven’t picked up “Do You Want More?!?” by now, you might as well consider yourself comatose, kid. The Roots’ *second* (the first release is not all that widely known, I still don’t know much about it) CD brought a fresh perspective to hiphop. Namely, phat ass jazz combined with dope lyrical skills. Back with their 3rd CD, “Illadelph Halflife,” they continue to pump out prime shit to keep our heads bobbin’ and rides thumpin’.

First thing I noticed when I listened to this CD was an immediate de-emphasis on jazz. I kinda felt disappointed at first, but then I got to checking the lyrics on this one. On point, even without the jazz. If you want jazz, go for their 2nd disc. This is just an all-out lyrical barrage, which keeps hittin’ you from beginning to end.

My favorite cut on the album is track 11 (44 on the CD), “Clones.” This was the first release off this album, and it talks about all the elements which comprise hiphop. A lot of groups talk about getting all the aspects of hiphop together, but few groups do an entire song about it. Much respect here for this one.

Another good cut is “UNIverse at War,” featuring Common. This MC can rip up the mic like very few others can, and together with the Roots, these brothas tear the fuckin’ cover off it. Some people may find these guest appearances on other people’s album played out by now, but I don’t. The thing I don’t like is when a guest appearance detracts from the song’s original groove. This one definitely doesn’t do that.

Other tracks I take a liking to include, “Section,” “Push Up Ya Lighter,” and “Concerto Of The Desperado.” Not to say I don’t like the entire album, but these one shine the brightest in my mind. This is the real shit, son.

I’m gonna praise this album one more time. Why? I think this is one of the phattest albums to come out this year, period. If you haven’t by now, go pick it up. Too many people slept on “Do You Want More?!?,” so make up for it by reaching out and grabbing “Illadelph Halflife.” No excuses.