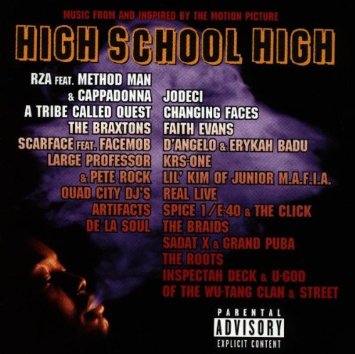 Yet another soundtrack to hit the scene in the nine-six? These soundtracks are getting up there in numbers, but as long as the good ones outnumber the mediocre ones, I’m cool with it. _High School High_ features an impressive lineup of artists – A Tribe Called Quest, RZA, Method Man, Sadat X & Grand Puba, KRS-ONE, D’Angelo, and Large Professor & Pete Rock. A mix of hiphop and R&B jams. Can you get loose to it?

Can’t say yes to that, can’t say no. It’s a decent album. ‘Wu-Wear: The Garment Renaissance’, has been getting playtime for a while now. While the lyrics are pretty good, the beats here aren’t what I expect from the RZA. But then I peeped the other Wu track, ‘Semi-Automatic: Full Rap Metal Jacket’, and I forgave the RZA. Inspectah Deck & U-God really don’t get enough publicity for what they do. These brothas can really get down, giving the Wu one of the most impressive lineups of all time.

KRS-ONE’s ‘High School Rock’ has the Blastmaster cutting up the mic and leavin’ it in bodybags once again. I don’t know about everybody else, but I don’t think I’ve ever heard a wack KRS-ONE cut. Nuff respect.

A song that kinda caught me by surprise is ‘The Ultimate [You Know The Time]’, by the Artifacts. I thought these guys had fallen off the godamn planet, but when I heard this song, I kinda figured out what they were up to. Just like the title says, this badass duo is back again. Good to see them back, that ‘Wrong Side of the Tracks’ shit still got me goin’!

On the R&B tip, D’Angelo and newcomer Erykah Badu give you some good old lovin’, with ‘Your Prescious Love’. All I gots to say about this one, stick this cut in when it’s time to get busy. Doesn’t disappoint.

Most of the R&B songs on here are wack. The Braxtons, Changing Faces, and The Braids tracks are all weaker than the punch at your grade 12 prom. Jodeci’s song didn’t do anything for me either. Aside from that bunch of wackness, the hiphop cuts are decent. If you got cash to spend, pick this one up. But if you’re strictly “I only buy CD’s that are mad phat”, don’t waste your time.