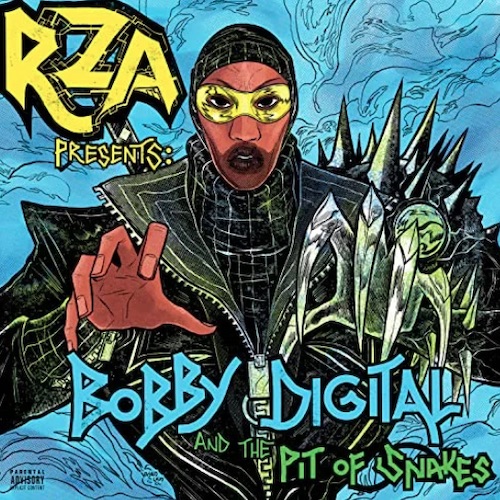 Bobby Digital and the Pit of Snakes

RZA :: Bobby Digital and the Pit of Snakes

“The sky may fall and worlds may shake
Our bond of friendship shall never break
We were brothers from another mother
Now when we speak we both seem to stutter
Have we grown that far apart;
with a stone inside our heart?” – RZA, “Something Going On”

Before you jump to conclusions about what Robert Diggs is talking about (I know I was certainly tempted to) a little backstory is in order. Dating back to the 1990’s RZA has been using Bobby Digital as a pseudonym for various solo projects. These are not strictly outside of the Wu-Tang Clan diaspora as various members make cameos or co-produce, but they’ve allowed Diggs to explore musical and lyrical ideas that fight better with his alter ego. Bobby Digital can be considered a comic book superhero, fighting evil in both the physical realm and the virtual world of cyberspace, achieving a “meta” reality long before Facebook thought to trademark the term.

For an eclectic eccentric like RZA, a man who loves to dabble in everything from producing tracks to kung-fu movies, having a multi-faceted approach to multimedia is a perfect fit. Therefore if you go looking for “Bobby Digital and the Pit of Snakes” and instead stumble across a novel by RZA and Ryan O’Sullivan, it’s not that one supplants the other. Both are meant to give you a different part of the story. As long as RZA is alive that’s a never-ending story that changes ideas and personas whenever it suits him, something Mr. Diggs alludes to on “Fight to Win.” If you had any doubt about the inspiration he takes from comics (or “visual novels” if you want to sound pretentious) the official visualizer for the song should clear that up for you.

“Unlimited bliss, Allah exists, a sun and star exists
The Ryzarector, he exists
Bobby Digital, do I exist?
Or am I just a bunch of oh’s and one’s, oh’s and one’s, cubits and bits?
I don’t thirst nor hunger
God walks amongst us
Snakes, laying by the grave; I told them ‘Freeze!
I’m not afraid — I’m no longer a slave
of a mental death and power’
Live eternity within an hour
How does life, feel to a flower?”

RZA as Bobby Digital is contemplating both the nature of reality and his own existence here. He’s questioning who he is, which personality is real, whether or not his essence transcends both the virtual and physical realm. It’s the kind of thinking that lends itself to Doctor Strange comics and multiverses full of madness. When Bobby Digi says there’s “Something Going On” that’s what he’s referring to. Listeners might be tempted to read between the lines and assume he’s talking about a broken bond with the Wu-Tang Clan. The truth is in a group that large there’s never NOT been friction between members. We’ve seen it in interviews, we’ve read it in print, we know they fight over matters large and small. In the end they put their differences aside for a common cause, and in the interim we enjoy their solo projects and the cameos they make on each one.

“Nothing beat the sound of nature, feel me? Nature itself is music.” RZA’s outro sounds like it was plucked straight from a YouTube vlog, and perhaps that’s the most fitting ending to “Bobby Digital and the Pit of Snakes” possible. This is an album where Robert Diggs is exploring what’s important to him spiritually and physically. It’s not an overly long album but as his Wu-Tang cohort GZA would say “half short and twice strong” benefits this presentation. Some may take the lack of Clan cameos as a sign of the current nature of the group, but I think that would be reading too much into a project where RZA simply wanted to meditate on the meaning of life. It’s possible that this is masturbatory and metaphysical at the same time. His tenure in the entertainment world allows him the luxury to branch off to side projects without worrying about how they’ll perform commercially. That freedom is also fun to listen to if you’re a Robert Diggs fan. As much poetry as rap, as much philosophy as sci-fi odyssey, “Bobby Digital and the Pit of Snakes” is not for the first time but the LONG time RZA listener.