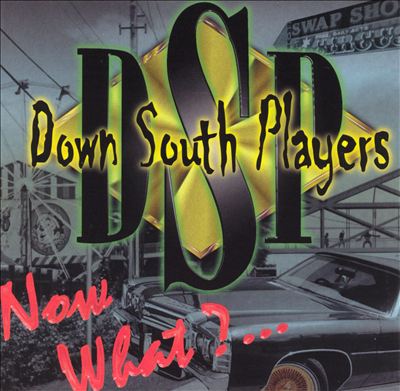 Down South Players :: Now What?

D. Rahming, Six-1, and KaLo — add them up and you’ve got three Down South Players who are ready to do what it takes to succeed. The question is, Now What?Does this team have the game to scam the cream or do they get lost in the seam before shit is sewn?

The album starts off nicely, at least on the musical tip. “Triple Gold D’s” has a beat which is hyperactive in the background and laid back in the foreground, which is an interesting combo. It has a certain bump potential, but ironically for three cats who hail from Florida, it’s not supathick with the bass. Perhaps it’s a stylistic difference between Miami and Fort Lauderdale?

The title track features a rapper named Ms. Attitude who is apparently the Gangsta Boo of Restless Records. I begin to find the “We need a gangsta bitch in our click” deal a little tiring y’know? When 9 out of 10 MC’s in the genre are male rappers that stink, why do we need to make the 1 out of 10 who are female stink too? Women are already a minority and now they’re being double penalized to boot. Her “South Side Souldja, bitch I thought I told ya” rap is completely interchangable with Mia X. Despite a fairly strong beat, I have to give this song a thumbs down.

The Players are startin to lose me. I’m still feelin the beats are fairly creative and hit at a nice uptempo pace on songs like “I Got Yo Back”, “Yeah Yeah Yeah”, and “Represent Tonight” but lyrically this shit has nothing for me. The latter is billed as their ‘crossover’ song and with a singer doing his best impression of Montell Jordan in gangsta siccmode, I can believe that. Yawn!

I could give this crew props if they had some nice storytelling skills. Many marginal rap lyricists can get over by lacing some shit up well, but these guys don’t. “Take a trip, with a nigga Down South, let me tell you what this Southern player shit is all about” is about as far as they get. With weak comparisons of the “nigga like Taco Bell, headed for the border” variety on “You Wanna Be a Player” this album quickly becomes mood music with little to no redeeming lyrical value.

If you want some smoove shit, listen to “Someone to Fuck You”, “Represent Tonight”, or the Bone-ish ripoff “Heavenly Thugs”. For some hardcore swing, check out “Triple Gold D’s”, “I Got Yo Back”, or “Yeah Yeah Yeah”. For some dope lyrics, check elsewhere. They get respect for trying to break the Down South mold a little by not breaking another bass album out of Florida, but unfortunately the lyrics don’t make up for it and you end up craving something that pounds harder even if the lyrics ARE more meaningless. They had a good shot to set a trend but end up firing blanks.