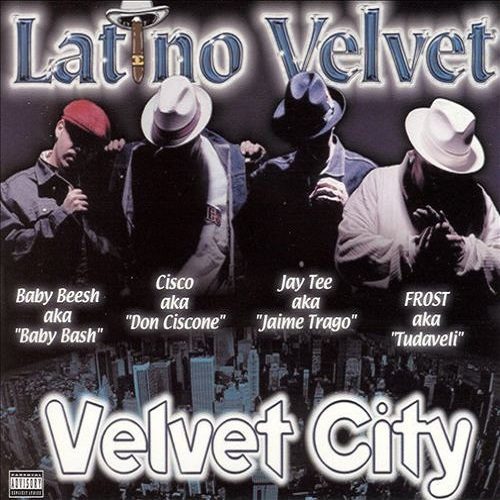 Collaborative efforts help connect the densely populated rap scene on the West Coast. This time it’s Latino Velvet hitting us with their already second longplayer. What used to be the brainchild of Vallejo veterans Jay Tee (of N2Deep fame) and Baby Beesh (ex-Potna Deuce) has now expanded with the addition of L.A. rap mainstay Frost and Frisco’s Don Cisco to the line-up, who were already featured on the first album. Together this crew should combine enough rap business experience to satisfy listeners from the Bay to L.A. and beyond. To stress their point, they hook up with another newly formed crew for the first cut of the album: “Holla What’s Up” with D.B.A. sets the stage for a typical hustle-driven album that aims to “put the West Coast back on the map”. Now I don’t know about this particular intent. For those who like listening to it, West Coast rap +is+ on the map, it’s just not in the media like it used to be. In order to get there, West Coast rappers would have to do things that don’t have necessarily a lot to do with the artform itself. I personally prefer settling with a solid rap album by established artists over watching one-hit wonders come and go and hypes over newly emerging hip-hop hotbeds explode and die down. If you like to sit back and contemplate your own hustle, this should be the album of your choice. And once you made it your choice, I’m sure you will agree with the words of “Just Because”:

“Now who said West Coast rap was dead?
Squares never recognize game above they head
Cause I don’t get jiggy and don’t holla ‘shortie!’
grew up on Too $hort, Ice Cube and E-40?
One life, one love, throwin’ up the doub,
cuttin’ up a little rug, car show to the club..”

That is to say that “Velvet City” walks on safe ground and avoids venturing into thematically uncharted territory. Guided by E-40 they go from ‘interstate’ to ‘international’ with the buck bounce of “Fo Sho”. The struggle continues with “Handle My Business” and “Can’t Give It Up”, “Perk With Us” is an open invitation to party the night away, “Scrilla Scratch” should be self-explanatory, while “Telly”, “Don’t Need No Love”, “Mira Mira”, “Candi Coated” and “Crazy Love” all indicate that Latino Velvet are not tired of the player lifestyle just yet.

At its core Latino Velvet is still mostly Jay Tee and Baby Beesh who display a very similar style and mindframe. Their tight chemistry makes up for the fact that Frost and Cisco are featured only on a minority of the cuts. But whatever the line-up, “Velvet City” is laced with solid performances throughout. If rappers don’t really rely on a catchy style it certainly helps when sung vocals spice up their tracks. Here cuts like the Levitti-laced “Telly”, the ones where singer Remixx gets down on it (“Fo Sho”, “Can’t Give It Up” and “Crazy Love”) and “Velvet City” and “Candi Coated” with Mary Jane Girl Candi are proof of that theory. After he opens up this album with “Oh oh, I’m back in this bitch, baby, with a new steelo and a brand new ride / No matter where you from, throw it up, represent yo side” it’s up to the one that’s been the longest in this game to put it all in perspective. In “Handle My Business” Frost reminisces:

“I grew up on the wrong side of the tracks
infatuated by the way that the money stacks
All I knew was pimps, players, bosses and macks
it wasn’t too many jobs for us browns and blacks
and so I hit the studio, tryin’ to find a way out
‘Frost, you ain’t never gon’ make it,’ but still I put my tape out
Half a million Latinos said that they was feelin’
what I was dealin’, in ’91 I made a killin’
But that was then, this is now, still raw as ever
That was then, this is now, I got my shit together
The game is so crazy, I let the streets raise me
My homies locked up or pushin’ up daisies
I slip-slide away from the madness
drownin from a tatoo tear from all the sadness
I thank the Lord that it was not me
I’m prayin’ that my homeboy R.I.P.”

If you think Latin Velvet appeal only to the Latin community, you’ve got it completely wrong. The intriguing thing is that a lot of rappers seem to have found a common ground on which to communicate with each other. That’s why this business of collaborations works so well. For the members of the Latino Velvet cliqua it’s just another level of their hip-hop hustle when they connect.