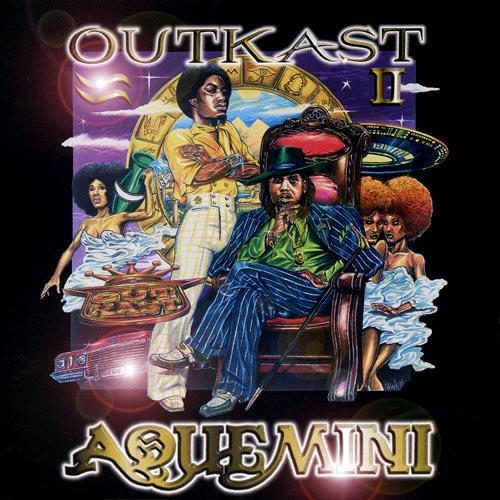 “It’s the return of the gangsta/Thanks ta’ them niggas that think you soft/And say, “Y’all be gospel rappin'” /But they be steady clappin’/When you talk about bitches and switches/And hoes and clothes and weedâ€¦”

“Return of the gangsta/Thanks ta’ them niggas that get the wrong impression of expression/Then the question is “Big Boi, what’s up with Andre /’Is he in a cult? Is he on drugs? Is he gay?’/’When y’all gon’ break up?'”

A recent interviewer asked Andre about his increasingly outlandish sense of style. He told the interviewer it’s no big thing, he just doesn’t want to look like everyone else. He doesn’t want to be anybody’s clone. Or as he finishes the above verse: “When y’all gon’ wake up? /Nigga, I’m feeling better than ever/What’s wrong with you?!”

Big Boi’s not pissed off though. Big Boi is Big Boi. Same as he ever was. The same ol’ player from West Savannah, GA. Still slammin’ Cadillac doors. Nothing’s changed. Well, maybe a little something’s changed. Being a father to his little girl has made him less quick to talk that “pimp shit.” Being a responsible man who also happens to be a rap superstar (“â€¦Graduated/Now I got the whole rap world fascinated,” he brags on “Slump”) has made him less quick to talk that “murder, kill shit.” And maybe he’s just a little world-weary. Compared to Andre’s blistering attack, Big Boi’s verse on “Return” is positively low-key:

“Man, a nigga don’t want no trouble/A playa just want to kick back with my gators off /And watch my lil’ girl blow bubblesâ€¦”

But less we think that fatherhood and stardom has made him fat and soft, Big Boi continues:

“â€¦But still ready to rhyme/Standing my ground, never back down /Willing to rob, steal and kill anything that threatens mineâ€¦”

But I know what you really what to know. With the dreaded Sophomore Slump behind them, you want to know will ‘Kast succumb to the Difficult Third Album syndrome. Like Big Boi says on “Y’all Scared,” you already have “Southernplayalistic” and “ATLiens” stashed away in your sock drawer. You want to know should you make room for one more? The answer is “yes.”

Though all of “Aquemini” is good, there are of course a few tracks that stand out. Most notably, there is the title track. It is Outkast at their very best. Big Boi’s timing is just right. His lyrics strike an even balance between street-wise bragging and common sense knowledge:

“Now is the time to get on/Like Spike Lee said, get on the bus /Go get your work and keep your beeper chirpin’ is a mustâ€¦”

“â€¦I stay down with these streets/’Cause these streets is where my folks at, better know that /Some say we pro-black, but we pro-fessional/We missed a lot of church, so this music is our confessionalâ€¦”

As Andre’s verse begins, the music drifts off to near quiet. His delivery his calm and lucid. The anger we heard on “Return” is gone. But as he takes us on a tour of his hometown, his words reveal more pain than pride:

“â€¦Live from home of the Brave[s]/With dirty dollars and beauty parlors/And baby bottles and bowling ball Impalas /And street scholars that’s majoring in Culinary Arts/You know, how to work the bread, cheese and dough/From scratch, but see, the catch is you can get caughtâ€¦”

“Da Art of Storytellin’ (Part II)” is another highlight. It is a brief, jarring tale of the apocalypse that finds both rappers straining to be heard through distortion and noise effects. “Look out the window/Golly, the sky is electric blue/Mama Earth is dying and crying because of you,” Andre begins. Recalling the Funkadelic classic “Maggot Brain,” Andre tells of Mother Earth “tossing and turning” because “she could not take it anymore.” Meanwhile, the world may be about to end, but Big Boi is wide open on the freeway, his mind on more immediate things:

After checking on his old lady and his daughter, Big Boi heads down to the recording studio to lay down his last rap: “The beat was very dirty and the vocals had distortionâ€¦tionâ€¦tionâ€¦.” Big Boi’s “final” vocals fade to nothing. Andre’s voice is scratched in and out, asking: “Who says good folks ain’t supposed to die?” A deep, monotone voice intones over and over, “Nothing’s well, all’s well.”

Another standout is the spoken-word dub/funk tune “SpottieOttieDopalicious.” Andre’s slow Atlanta drawl blends perfectly with the groove as he describes “a lil’ discotheque nestled in the ghettos of Niggaville, USA.” Despite his exact, picturesque description of the joint, Andre claims to have never actually been there. “Well, perhaps once,” he finally admits. “But I was so engulfed in the Ol’ E, I never made it to the door.” Big Boi’s verse begins as a love story – he spots a Dopalicious Ottie of his own and they start a little family. But the tale abruptly turns into a cautionary one for those who may not be ready for man-sized responsibilities:

Apparently though, the cat Big Boi has in mind wasn’t exactly handling things:

“Aquemini” is full of small moments that make you nod your head and look forward to hearing them again. You find yourself grinning in appreciation of the extra studio time it took to add a little of this here and a little of that there. Like the backsliding pause right in the middle of “Aquemini.” Or the harmonica (yes, harmonica) solo on “Rosa Parks.” Or the crackling distortion mixed with bluesy piano on “Da Art of Storytellin’ (Part II).” Or the interlude featuring Andre getting overcharged for some jive weed.

“Aquemini” is also full of lyrics that are so real they could get you down except you’re busy laughing at that double-meaning you finally got on the umpteenth time you heard it. (“We ain’t Club Nouveau/So quit spreadin’ them rumors,” says Big Boi.) And then you have off-the-wall stuff like Andre introducing himself to himself at the end of the title track – “Andre, this is Andre.” They are pleased to meet each other, I’m sure.

The songs mentioned above really are only the highlights. You will find that the entire album will keep you listening. “Aquemini” isn’t as funky as “Southernplayastic” nor is it as conceptual as “ATLiens.” It has the loose vibe of the former, and the state-of-the-art sound of the latter. But from the spaced-out, 21st century funk of “Synthesizer” to Big Boi’s back-to-his-roots solo turn on “West Savannah” to the all-out soul revival marathon that is “Liberation,” “Aquemini” is consistently intelligent, soulful and original. It’s like a day in the life of two space-age brothers living everyday lives, fighting everyday fights and dreaming everyday dreams. And in capable hands like these, that’s a beautiful thing. If you don’t already have this album, what are you waiting for?