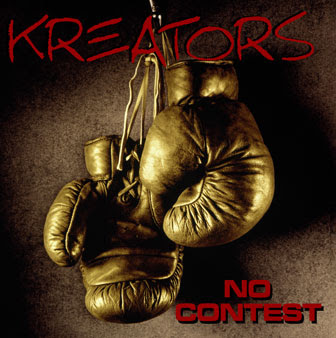 Hailing from Boston, the Kreators are ready to drop “verbal nepalms”. That’s right, Boston. This four man army consisting of G2 (that’s G squared), Jayson, XL & Big Juan are on a mission to warn us all about the evils of the music industry. Yeah we already know about them, but these guys have a serious beef against the major labels and mainstream wack MCs who don’t write for themselves. Not that it’s a bad thing, but a little variety on the topics would have been good.

Enough BS from me, here’s the meat & potatoes. The production by G2 is very nice. The use of subtle snares, loops & piano riffs was very audibly pleasing. On their first single, “Foreign Lands”, I was really feeling the use of the harp (was that a harp?) and acoustic guitar. But “No Ordinary Love” featuring Ed OG is slammin! A phat bass line that will surely keep heads nodding. And you’ll keep it nodding through out the album.

Lyrically, they definitely have something to say. “To tell the truth/I can’t stand you/hope they Miranda you/the Source slander you/you masquerade/we’re not your average underpaid/overhype ghost written slave/ stuck behind the mic/nobody owns, only rents me” – Big Juan, “Who to Trust”. From the same cut comes I think one of my favorite lines from Jayson, “Kreators/We shoot for the moon/so even if we miss/we amongst the stars.”

I did especially dig the skits. My favorite is the “Industry” interlude. A description of, you guessed it, the industry, done Casino/Bobby DeNiro style. Its ILL! Be sure to check them out at Bomb Hip-Hop to learn more.