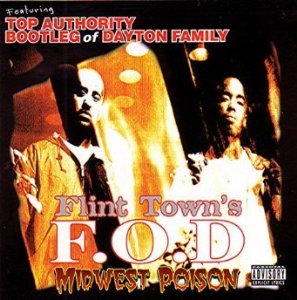 The up and coming RapBall Records just may have something good goin on here. This reviewer can honestly say this is the first time in a long time he heard anybody claim to be the “Rawest Since 2Pac” and not be dissapointed.

Flint, Michigan’s own Faces of Death (not to be confused with the Bone-Thugs) have released their second album, a follow-up to “Them Faces Puttem Down” on Boomin’ Records. The steelo throughout is as tight as the family links, as fellow regional artists Top Authority and Bootleg (formerly of the Dayton Family) put it down with cameo appearances, such as on “If NGZ New,” one of those type of songs which won’t put people on the dancefloor but which is definitely KRUNK comin out the trunk of yo’ car.

Thematically, the lyrics do not really cover new ground. “Night Rider” featuring Lady Dollar is that typically party type cut, but the synth funk gives it that extra necessary bounce. “If We Gone Smoke” is that typically blunted out cut, but the slowride bass keeps the groove moving. “Midwest Poison” is probably the one that most heads wouldn’t understand at first, unless they related regional pride to their own hometown. This cut has some of the album’s best lyrics:

It only takes two pounds of pressure to bring the si-rens and the stretcher/ and leave a motherfucker wetter, than Vanessa, Del Rio/ cause bitches tell hero stories like Hitchcock/ I roll with my shit cocked, twenty-five eight, cause it’s mandatory â€”“Midwest Poison”

This album represents the Midwest with flavor. Original beats take the place of familiar samples, and strong lyrical flows hold down the cuts, which are a tad excessive on the “hood themes” but no more or less so than contemporaries such as Jay-Z and E-40. And they are on the verge of being at that level. Make no mistake, you will hear more from F.O.D. in the years to come.