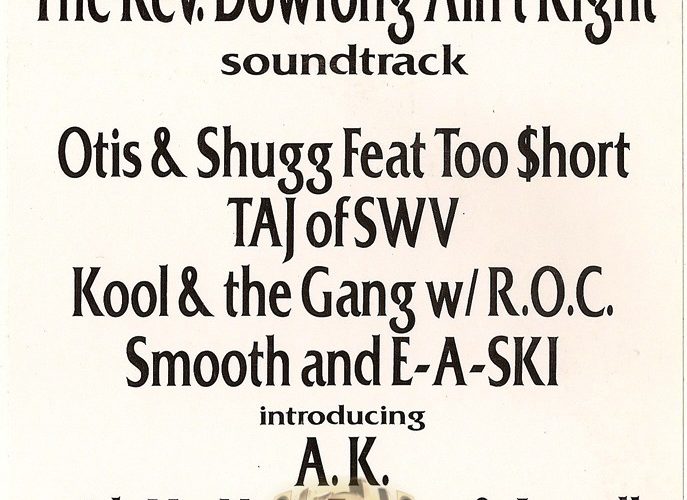 Before this album, I had never heard of the record label, “White Lable” ever. I had never heard of this movie with the corny ass title either. Not to mention the list of artists on the track were mostly unknowns to me. But stranger things have happened in this world. I mean, Kool Keith is in a Sprite ad. So this soundtrack *could* be dope.

The as such soundtrack is a collection of cliches and tired concepts, with a smattering of good efforts tossed into the pile here and there. It’s got it’s share of gangsta, pop and R&B cuts, and since it’s a movie about a Reverend, there’s even a few gospel songs. Maybe the soundtrack is trying for a “something for everybody” type feel, but it’s more schizophrenic than anything, with gospel songs following after gangster tales.

The soundtrack starts with a Timbaland lite song by Smooth, featuring EA-Ski, whose “earthquake” solo lp is lost in the bermuda triangle somehow. The song, “Girlfriend,” is your basic “you’re a dog and I caught you fuckin around on me you bastard” type song. The beat is agreeable enough, and apparently Smooth has thankfully given up rappin. EA-Ski’s vocal contribution consists of a stupid phone message where he admits to the cheating and actually says, “Well, you made me do it.”

The bouncy gospel track, “Do Your Will” by Derrick Hall and Co. follows, and has enough funk in it to keep you listenin. Following along with the funk vibe, Kool and The Gang (featuring R.O.C.) pop off next with “Where the Boogie At,” a rehash of their classic “Jungle Boogie.” The difference between the two songs is that there’s a bland party rapper spouting wack lyrics over Kool and The Gang, complete with requests to say ho and say heeey. The beat switches up to another Kool and The Gang song near the end, but it’s not enough to save the song from mediocrity.

“The Habit” by Naeeemah is next; and although her voice is pleasant, and the beat grooves along nicely, it’s ear candy that’s instantly forgettable — but you wouldn’t hit fast forward while it was on. Next up is “Movin On” by AK featuring Yo Yo, the Five Footaz and Jewel (not the folk singin bullshit bleeding heart poetry spouting new age singin out of her van Jewel, but a different one.) Yo Yo, when not doing ill-advised Biggie Smalls ripoffs, comes off well with real presence on the mic. Unfortunately, she’s not on it for very long, and the song suffers, as the Five Footaz prove that their best shit was that freestyle in “The Show,” and Jewel is just blah. Over a “No Scrubs” like beat, the girls rail against what dogs men are when they fuck around on girls. Again.

Suga T is up next with Super Bad Bitch, a song that starts off ( I sense a theme here…) railing against men who fuck around….blah blah, you know what I mean. The Conscious Daughters show up midway through and change the song over to a pimp rhyme, in the process blowing Suga off her own track. The hook is fuckin ass, with Suga singin in a high pitched irritating tone, “Baaaad Aaaas Biiitch!” over and over. I know she sings it because she admits it at the end of the song like it’s something to be proud of.

Then the steaming turd that is “I Got News” comes on. The artists, Big Tyme and Herculeez are those fat fucks from “How to Be a Player.” You know, the kids at the barbecue that look like the before and before shot? That one kid from “Nutty Professor” who chows on the chicken while Eddie Murphy claps “Hercules! Hercules!” over and over? Those kids. Apparently White Lable records threw these cats a record deal, for whatever reason. They show why they got almost no lines in their film appearances as they spit a rhyme that sounds like it was written during detention from fourth grade. Delivery is ass, lyrics is ass, and content? They rap about how they gotta turn away so many women because the hoes weren’t approachin em before they got “Famous.” Please. Like these cats can afford to turn away pussy or somethin. That shit might have worked with Biggie and Big Pun, but Big Tyme and Herculeez aint got it like that. The fact that kids like these are gettin record deals off of nothin while hip hop artists thousands of times more worthy are workin like fuckin crazy to get deals with no results is amazing to me. Oh yeah, and the beat is Casio quality bullshit.

Lil Will drops a track that uses the same sample used by Blahzay Blahzay on “Danger”, but they add more strings and voice to nice effect, but the mix is off, as the basic lyrics are about 3 times louder than the beat. Next is “Shake it Up” by the Entity All Stars (formerly the Militia: Mrs. Toi, Mr. Tan, and Lord G.) While rockin over the thumpin bassline and skittery keyboard, Toi raps, “I love this shit too much,” and for the first and only time on the soundtrack, the love for hip hop shows through. They trade verses effortlessly and compliment each other well.

The title track, by Knowledge the Pirate, starts off soundin like another Bone, Do or Die, Twista, style track, but Knowledge actually shines through, exposing the hypocrisy of some of our community religious leaders with his forceful voice.

Then Aqil from Wreckx and Effect shows up with a wack gospel rap that has you expecting to hear him say “check baby check baby one two three”, but insted, you hear him invoke Biggie’s name like they used to kick it all the time. It cant’ get worse, but on the next track, it does. King George drops “The Game is Deep,” a track with no redeeming qualities. What do you expect from a cat who got kicked out of TRU? If he wasn’t good enough to hang with THOSE wack fucks, you know there’s no hope here.

“Make Money 2000” comes on next, and I appreciate that Mikko and Black Chill put some force into their delivery, even if the subject matter is tired. It might be paint by numbers, but at least they’re trying to add different colors to the picture. The hook is pure garbage, “All my niggaz, make money money, make money money” but the verses make up for it. Listenable.

The cd ends with “Somebody I Know” by Kali’s Finest. Suuuuuure, Kali’s finest my fat ass. I’d like to make a request that Kali’s Finest and any other up and coming G rappers LEAVE ZAPP ALONE! quit sampling “More Bounce to the Ounce!” Shit is tired as your cliche lyrics. And the casio keyboard is getting used waaay too much on here, too. EA-Ski is on here too, and I can’t understand how he let this peice of shit get by with his name on it. The perfect track to leave a terrible taste in your mouth at the end of the cd.

Overall, this album swims in mediocrity. The beats are serviceable, bordering on dope sometimes, but the majority of the rappers and singers bring it back down to that “blah” level. “Rev DoWrong…” is a soundtrack that, if released about 6 years ago, probably would have been kinda dope. But almost everything here has been used and overused too many times (“throw your hands in the air!” Jungle Boogie and Zapp, “make money money” “saay hoooo!”) so that you’re bored with most songs about a minute and a half in. This soundtrack is something I’d listen to if my friend left it over at my house, I got tired of listening to everything else, and I needed something to put in while I vacuumed and did dishes. Except for that Big Tyme and Herculeez track, I’d go fuckin apeshit and run screaming into the other room to shut that shit off. Anyway…