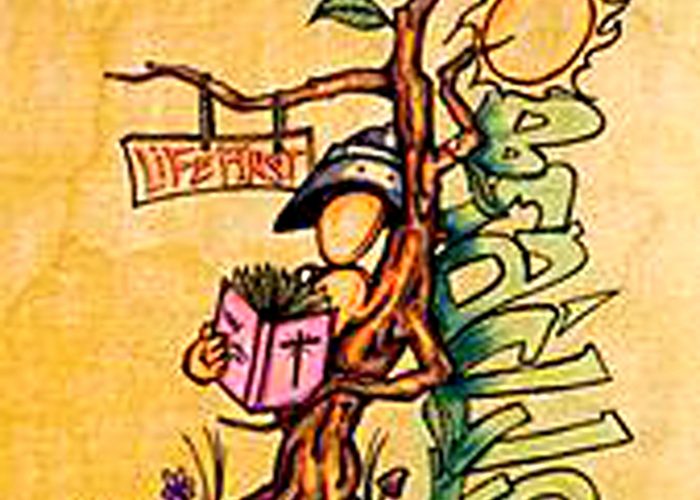 Braille who? I never heard of him either until I received his new CD in the mail for this here review. According to the press material packaged within, he’s from the hip-hop anti-mecca known as Portland, Oregon and released material previously as part of a crew known as Mentors of the Aurora. Well, I figured, everyone has to start somewhere– after all, not every up-and-coming rapper can drop their first album with the Wu-Tang seal of approval featured prominently on the cover. But I’ll be honest, after getting beyond the promo shit and inside the jewel case, I received a bad first impression from this kid (I mean that literally, he’s 17). You see, his looooong comments on the CD sleeve begin with thanks to GOD and goes on to mention GOD seven more times. He even encourages the reader to “seek a personal relationship with GOD.” Now, this kind of stuff usually sends me running in the other direction as I have zero tolerance for Christian proselytizing in any medium. But I felt obligated to give the CD a listen so I popped it into my old Panasonic expecting to be DC Talk-ed to death, but I was pleasantly wrong…

Yes, Braille is religious. And yes, it’s there in the lyrics on the CD. But Braille isn’t using his record contract to beat us over the head with a Bible. Rather, he puts his life in its entirety at center stage for everyone to gather around and observe for themselves. In fact, he shares his thoughts and feelings with the listener with such transparency and honesty that the lyrics seem like a diary on wax. Nothing is too personal for him to put down on paper: his feelings of guilt and self-doubt, his self-professed “lack” of skills (“I’m not the best MC, that, I can admit,” from Security Blanket), or his reliance on God and his yearning for a Christian wife. And while this sort of style is becoming more and more popular with the success of Common and L-Boogie, it still sounds refreshing compared to most of the crap out there today. Too many rappers run around saying what they think the audience wants to hear; Braille writes what he wants and the listener can accept it or not. And while he may not make as many sales as the next gangsta rapper that comes down the pike, he does have a hip-hop album under his belt with his integrity intact. “So what? Can he rhyme?” I hear some people asking. Yes, he can. While I give him props for his attitude, his lyrical skills should satisfy most heads. Except, of course, for the “that shit is corny” crowd who prefers the so-called “reality rap” nihilism over anything remotely positive or uplifting. No question, Braille is a gifted lyricist.

But that’s not the same as being a gifted rapper. You can see his only weakness when he shares the track with other rappers. In terms of voice and that undefinable quality of “charisma,” Braille is usually outshined by his partners on the mic. His lyrics are tight, but there is something (and don’t ask me to pinpoint it, please) quite pedestrian about Braille’s voice, delivery and style; he just doesn’t reach out and grab you like Ethic does on Feedback (dope, I’m definitely checking for this cat) or Storm the Unpredictable on Lifefirst (ditto). But considering his age he’s still got time to cement his style – who knows where he’ll go from here.

Production is shared by Celph Titled, Deeskee, DJ Kno, K IV, Sixtoo, Big Balou, and Kiilani (damn, doing hip-hop reviews is hell on my auto-spell check), and, as you may imagine given the number of producers here, varies in quality from average to pretty dope. Some of the nicer tracks include Gullet Gambit, Braille’s own attempt at a battle rap (though tame compared to most, and in the liner notes he makes it very clear that in real-life, he “would never harm anyone”), Feedback, Lifefirst, and Ink Blotch. Kiilani gets props for sampling Alfred Hitchcock on Molasses.

I’d love nothing better than to see this album go platinum. But sadly, given the state of hip-hop today, that just isn’t likely. Quite frankly, while I like this album and find Braille to be an excellent rapper (and I’d imagine a good person as well) he is simply out of step with a good majority of the hip-hop audience. To white kids, he may seem like the guy at Church that raps about God. To the black audience, his persistent optimism and hyper-personalized subject matter may be big turn-off. And he just isn’t Christian enough to get heavy publicity and sells from the young Christian community. This leaves as his market the hip-hop connoisseur; a good bunch of people no doubt, but hardly a group that can push album sales to the upper stratosphere (see Ras Kass and the bang-up career move he made to rectify the problem). And without success at the sales counter, a sophomore release is put into doubt. So take the risk and pick this one up; there are lyrics for the wordsmiths, nice beats for the music lovers, and enough guest spots to add some variety into the mix. And while you’re buying it, you can feel good about striking a blow for indie rap and making it that much easier for a young, gifted rapper to drop another one.