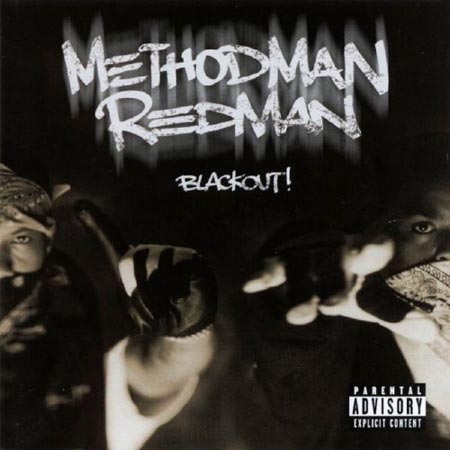 Yo, If you turn on MTV, you might see the latest season of the Real World come on. But they’ve shrunk down the cast for whatever reason. For real, listen to the new opening:

This is the true story, of two weedheads, put together in a studio, with too much time on their hands, too much pop culture to regurgitate, and not nearly enough motivation to come half as fat as they can. Method Man. Redman. Blackout.

For real, if this shit had managed to come out around “How High” then maybe it’d be better recieved by my fat ass. Anticipation was high then. Little did I know that they were peaking then. I wish they’d done this album at the height of their skills back then. As it now, while the beats are good to dope, the delivery and lyrics are pretty tired. Red and Meth, both coming off lackluster albums (although I thought “Doc’s The Name” was the better of the two, personally) don’t sound inspired, hungry, angry, anything. They just sound bombed out of their mind and anxious to crack the next bag open. This does not a good album make.

For one thing, they think they can get away with straight biting concepts from movies, old records, whatever, and pass it off as either parody or homage. Bullshit. The intros are real bad. No humor at all. Oooh, a Blair Witch skit here, a “Psycho” skit there. The pleasant sound of Red pissing into a urinal while he repeats the intro to “Automobile” by Eazy E verbatim. Hey, here’s a good idea, let’s change “the Bridge,” into “The Bricks!” Great idea, huh? No point to it whatsoever. What made Red and Meth cool wasn’t that they were good at this pop-culture mimicry, it’s that they made shit that pop culture wanted to imitate. I blame that fuckin “Whatever Man” video. That was the beginning of this biting shit. And that’s just intro’s and interludes, which, unless I say different, I ALWAYS recommend you skip. That doesn’t count the cover of “Mic Checka” that they rename “Cheka.” Not to dog Das EFX, because that song was dope, but I don’t think it’s worthy of a remake. That and these cats don’t do it any better than Das did, which basically makes it pointless. There’s about one instant of straight bitery for almost every song. It’s kinda frustrating that these cats, usually so creative, are just laying back, churning out product instead of crafting their shit carefully.

Second, what the FUCK is “How High,” Well All Rite’Cha” and “Big Dogs” doin on here? I’m guessing the people willing to buy this shit already have the other two cds those tracks show up on. It just adds to the laziness that I believe that this album was recorded with. Like it was:

“Yo, I don’t feel like recordin no more shit today.”
“Yo, neither do I.”
“You wanna get a fuckin pound?”
“Fuck yeah. We’ll just stick some shit from our old albums on there to fill the shit out.”
“Dope.”

At least “How High” is the original version and not that shitty remix. Why Erick ever thought that “Fly Robin Fly” vocal sample fit is beyond my fat ass.

Speaking of Erick, he tends to coast a little here, too. He’s getting a little too addicted to these shuffling, snare smack absent beats (think 4,3,2,1,) as I’ve heard quite a few beats from him lately work this style. He sneaks one in on this album, too. Although that is thankfully the only one, and to be fair, it is still kind of fat (Y.O.U., track 4) Erick and the other producers aren’t to blame for this albums mediocrity. It’s all on the glimmer twins here.

Point blank, these one line masters have dropped an album completely devoid of any memorable one liners. Not to say there aren’t some dope songs that manage to capture that old Red and Meth feel circa “How High.” Songs like the lead single “Tear it Off,” propelled by Sermons funk, the criminally too short “Da Rockwilder” produced by, hmm, Rockwilder, “1 2, 1 2” brought to you by DJ Scratch, and “The ?” with beats by Red hisself are all head noddable. But it’s just bright spots lost in the bog of boring shit we’ve heard too many times before. Keeping with the dank motif here, these songs are like the nuggets of bomb snuck into a 20 sack of bammer brown shit.

And then we got the obligatory guest shots. Why, I don’t know. Red and Meth are all the MC we should need on this shot here. But we get a guest job by Mally G, aka Jamal, aka that Def Squad benchwarmer. I don’t understand why, he’s outshinin Red on the cut “Dat’s Dat Shit”. Unfortunately, Young Zee from Outsidaz is limited to yelling the chorus on that song, as opposed to getting a verse of his own. “Run 4 Cover” has a beat by RZA that’s servicable, but guests Streetlife (cat gets around, don’t he?) and, God Forbid, the one and only, Ghostface Killah. I’m sure if you’ve peeped this spot before, you know what I think of Ghost’s pretentious, flow-free bullshit brand of lyricals. He doesn’t dissapoint here. LL and Ja Rule pop up growlin and talking shit on “4 Seasons” Blah blah blah blah…

That’s the whole vibe of this album, really. Wait for the singles, if they release the right shit. dub em off the radio or something. Spend your money on that sack instead. I’m sure Red and Meth would rather have it that way. Me, I’m just hoping this is some kind of phase they’re going through or something, this whole biting shit. These two cats used to be guaranteed dope. Not any more.