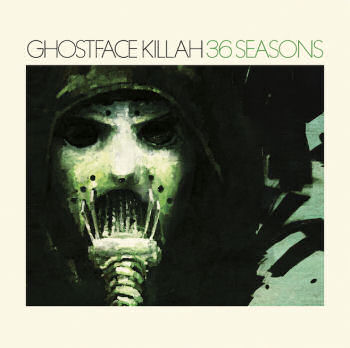 Dennis Coles, aka Ghostface Killah, aka Ghostface, aka Tony Starks, aka Ironman, aka Ghostdini, aka Pretty Tony, has been releasing collaborations and solo albums since 1993. That’s 21 years, long enough to make him a legacy artist. His career is officially old enough to drink. Of all of his fellow Wu-Tang Clan members, Ghostface is not only the most prolific, he’s the most consistent. The only two albums of his that this site has reviewed that didn’t get an 8 or a 9 are “Ghostdini” and “Ironman,” and I’m going to bet money that “Ironman” would get a much higher score if we reviewed it today rather than when it came out eighteen years ago. We at RapReviews like Ghostface. Most hip-hop fans like Ghostface. What’s not to like? He’s a great storyteller, a great rapper, and he works with good producers.

The downside to Ghostface’s consistency is that it has become a formula. Ghostface gets a producer or producers who sample classic soul and spits raps that are one part gangsta, one part comic book, and all with Ghost’s crazy sense of humor. Listening to Ghostface is like reading a comic book written by a street tough with women troubles. That’s what Ghost delivers, time and time again. He hit paydirt last year with the concept album “12 Reasons to Die.” On that album, he teamed up with a single producer, Adrian Younge, who created a blaxploitation soundtrack with live instruments over which Ghostface rapped about a murdered mob enforcer whose remains are pressed into twelve albums, which when played resurrect him and allow him to get revenge. The album was a reboot for Ghostface, reminding listeners that he was still relevant. The album worked so well that Ghostface decided to do it again, only this time with Brooklyn retro soul band the Revelations handling production instead of Younge. It’s like an unofficial sequel to a film, without the original director or writer. So the question is, is the sequel as good as the original?

The story for “36 Seasons was written by Bob Rosenberg, who worked on the comics based on “12 Reasons to Die.” In it, Tony Starks returns home after being mysteriously gone for nine years (or 36 seasons), possibly while imprisoned in the Tombs. He comes home to find his girl Penelope aka Bamboo has hooked up with a new man. His friend, a police officer, tells Ghostface that Bamboo’s new man is a drug dealer poisoning the neighborhood. Ghostface takes him out, gets betrayed and is covered in toxic chemicals, has Dr. X put a ghostlike mask on him, and then proceeds to clean up the neighborhood as the Ghostface Killah.

Unlike “12 Reasons,” none of the other Wu members are present. It’s still full of Wu fan service. The title references the 36 chambers of Wu lore. The beats often sound like RZA production, using a combination of dark drums, menacing bass, and a piano adding a hint of melody. “Loyalty” even quotes an entire verse of “C.R.E.A.M.” Ghostface knows what his fans want, and he isn’t too proud to give it to them.

The Revelations’ production may not have the intensity of Adrian Younge’s work on “12 Reasons,” but it still sounds good. Late sixties R&B has always been a fundamental element of Ghostface’s work, and The Revelations do a good job of capturing that sound. They even offer a cover of the Persuaders 1971 hit “Thin Line Between Love and Hate.” Much like how the Who covered Sonny Boy Williamson’s “Eyesight to the Blind” on “Tommy,” “Thin Line” is a cover song that fits in with the concept of the album. It also pays homage to “36 Season’s” best character, Bamboo, voiced by Kandace Springs. She gets a raw deal on the album; Starks leaves her for nine years without a phone call and then gets hurt when he finds out she’s moved on with her life. Her new boyfriend turns out to be a vicious drug dealer, and she’s got crooked cops lusting after her as well. Springs has a gorgeous voice, and her solo turn on “Bamboo’s Lament” is one of better songs on the album.

The story may be written by a guy who writes comics, but it still reflects the stick up kids, corrupt cops and crack rocks that have populated Wu songs since the beginning. The group and its affiliated artists have always juggled the line between gangster rap and pulp fiction, and Ghostface’s recent exploration of full-on comic book themes fits in within the Wu universe. The story, as full of superheroes and supervillains as it is, is essentially about the same themes that have been present in Ghostface’s music for years: friendship, betrayal, love, protecting your neighborhood, and trying to overcome the things you’ve done in the past.

As with “12 Reasons,” the story in “36 Seasons” gives Ghostface and his fellow rappers a creative challenge. The hardest part of being a rapper must be running out of things to say, so I can imagine that having a storyline to write about is helpful for a rapper two decades into a career. The downside to having a storyline means that the rappers sometimes must construct awkward verses to advance the storyline. This is compounded by the fact that Ghostface seems to be running low on inspiration and not always bringing his A game. “You gotta just stick with me/Shit’ll get sticky,” he raps on “Call My Name.” “Shit has changed up for all types of reasons” he raps on the opener “The Battlefield.” “Staten Island ain’t the same, shit is lame.” Of course, even when Ghostface is phoning it in he is still better than most rappers out there. Even with a few clunky rhymes he still shows why he is so revered. It also helps that he’s supported by strong turns from AZ, Kool G Rap, Pharoahe Monch, Trey Williams, Shawn Wigs, Rell,and Nem. AZ threatens to steal the show on his verses, and all the rappers prove themselves as performers. It helps that the characters they are playing aren’t much of a stretch from their usual personas.

Even if “36 Seasons” is a rehash of “12 Reasons to Die,” and Ghostface is sounding a little tired at points, it is still a strong album. It’s like a blaxploitation movie set to music. At 40 minutes, it doesn’t overstay its welcome and keeps things brief and to the point. None of the songs hit the four minute mark, and each track rolls into the next in a way that keeps the momentum going. The beats are consistently strong, balancing the sinister and soulful. Whether it’s the guitar flourishes of “Loyalty,” the driving beat of “The Dogs of War,” or the tense interplay between guitar and bass on “Homicide,” The Revelations manage to create a new take on the classic RZA/Wu sound template. It hits all the notes that you want from a Wu-Tang Clan affiliate, and is much a more satisfying project than “A Better Tomorrow.” Ghostface Killah may work off a formula, but if the formula keeps producing results as good as “36 Seasons,” maybe that isn’t a bad thing.