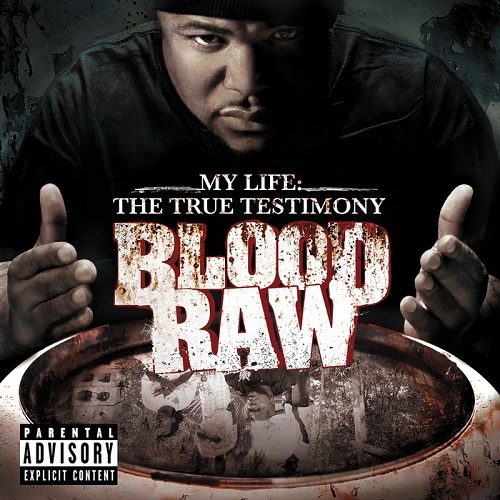 Thank heavens it’s not a FALSE TESTIMONY. That would have been a huge waste of time. Besides, the hip-hop courts could impeach him for perjury.

Bruce Falson a.k.a. Blood Raw seems pretty assured of our interest in his testimony in the first place, as though he were Roger Clemens appearing before the Oversight Committee explaining how he didn’t inject a needle full of steroids in his ass. Perhaps that confidence comes from signing with Def Jam, still a hip-hop brand name even today as it grows ever distant from the pioneering days of Rick Rubin and Russell Simmons. More likely it comes from his close friendship with Young Jeezy and his membership in the U.S.D.A. clique. Remember U.S.D.A.? Why should you. They released a horribly vapid album filled with generic raps and bland beats saved only by the hit single “White Girl” and a remix of Jeezy’s “Go Getta” featuring Bun B and Jadakiss. Mr. Falson must think a name like Blood Raw sounds scary enough to impress us that his true life’s story will be a cinematic horrorshow; either that or he’s counting on Young Jeezy having a big enough fanbase to support second or third tier spin-off acts. That doesn’t always work in hip-hop though – some are Redman and EPMD, some are Mr. Short Khop and Ice Cube. Much like HGH being a top prospect may not help you much – it just makes you look a little stronger when you debut. Blood Raw at least had the good sense to feature Jeezy on his first single “Louie”:

“One thing about Raw, Raw got swag
Raw hit the mall, baby Raw pop tags!
Raw stay clean, Raw stay fresh
You know it must be ’87, denim jeans (I +Guess+)
I bought ’em in Miami, ship them broads up to Duvall
Must of had 20 chickenheads up in that U-Haul
I move so smooth, cause them jack boys backtrack
Half a quarter mill’ in the brown Louie napsack”

Okay so Raw’s “True Testimony” is about narcotics. Wholly original. Never heard that before in rap. At least for the first half of his album Blood Raw is pouring it on thicker than gravy with guest artists and producers. The spoken word oratory of Big Rube is always worth hearing and greatly enhances “I’m the Truth.” Drumma Boy provides his magic touch on “It Feels Good,” giving the song a comfortable balance between DipSet and Dirty South. The real surprise is “Almost There,” featuring a beat and cameo by Mannie Fresh, with a topic matter much easier to relate to than drug sales. In fact Raw’s rap is the first verse is almost fresh:

Trina shares the billing with Raw on “What’s Happening” and Lyfe Jennings drops in to croon on the Terry ‘TA’ Allen produced “Tryin’ to Get Home,” but after that point Blood Raw is entirely on his own. Now in a modern day era where albums are as likely to be digital as physical the track order may not matter that much, but if you’re playing the CD sequentially it still seems odd that the first half of “True Testimony” would be so top-heavy while the second half would be absent of any big names whatsoever. It might have helped if they listed the producers on the album’s cover – “Get Away” is a slick J.U.S.T.I.C.E. League track and The Runners handle the album’s closing song “I Miss You.” Even the more obscure names do a more than competent job, such as the energetic Jeezy style track “I’m Fly” handled by Arnaz ‘The Nasty One’ Smith.

Ultimately it’s that close similarity to Young Jeezy that both helps and hinders Bruce Falson in delivering his “True Testimony” to the masses. At times he seems to be trying so hard to rap like his mentor that you’d much rather hear from the original himself than a clone, and choosing the same style of production to rap over doesn’t help matters either. On the plus side out of a seminal group of D-level rappers Blood Raw might in fact be the U.S.D.A. prime cut. He’s borderline to being just another generic rapper telling us how “real” his life is, which doesn’t really make him a prospect in a rap field crowded with former drug dealers and kingpins, but the flashes of humor and charisma indicate Jeezy had a good reason to push him as a soloist and even share space on Def Jam’s roster with him. Blood Raw lucks out here – his “Testimony” would not have been as compelling without his friends at his side and some good producers on his songs, but he’ll undoubtedly be called back before the hip-hop committee for more testimony at a later date.