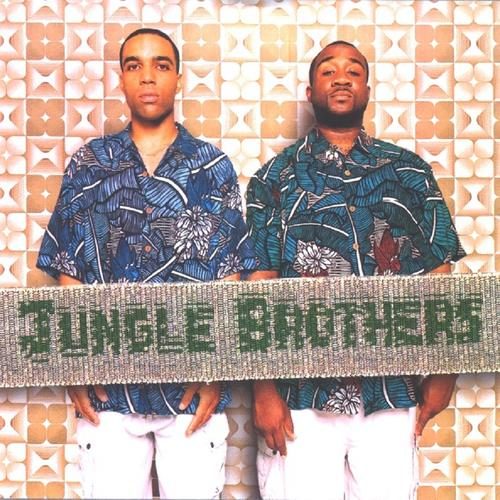 Since leaving us with yet another good hip-hop album that didn’t get marketed in “Raw Deluxe”, The Jungle Brothers new album “V.I.P.” (released on V2, a division of Gee Street) borders on nothing but pure love of music. They will try once again to grab a new set of fans with what some of the latest rap fans now call “old school”.

Starting off with the title track “V.I.P.”, Mike G and Afrika Baby Bam send a party vibe that should get airplay in the UK. Past tracks such as the Urban Takeover mix of “Jungle Brother” and the now classic “I’ll House You” (produced by legendary house producer Todd Terry) have shown that the UK love this energetic yet positive duo. It’s a total party track with simplistic lyrics that are just fun yet aren’t mind bending in the class of a Chino XL or Kool Keith.

As in the past, guests frequent this album. “Down With The JBs” features West coast rap trio The Black Eyed Peas, and lyrically the track flows smoothly with a nice beat and timely scratches. The Holmes Brothers (signed to Rounder Records) also help lay the background music for a couple tracks, “I Remember” and “Playing For Keeps”. Both are a little more on the mellow but uplifting side. The latter features the JBs singing to what one can imagine as an open mic night at one of the old dives that the Holmes Brothers had played in for almost 20 years in New York City.

Along with the down-tempo side to the new album, the Jungle Brothers also keep with their UK fans with tracks such as the housey “Get Down”. The track is sub-par, however, and really doesn’t have anything new or creative to provide the fans. “JBs Rock The Dancehall” works to make up for it, and provides cleaner production and a frantic beats-per-minute pace that UK and New York jungle fans will feel warmer towards.

The last two tracks make up for the lack of surprises on “V.I.P.”. After an up and down rollercoaster ride through the album, “Freakin’ You” jumps out as this incredibly pleasant surprise. Imagine mixing elements musically of David Bowie’s “Earthling” with the hip-hop vibe of something off of A Tribe Called Quest’s “Low End Theory”. More of the track is reliant on instrumental, but it is a gorgeous track nonetheless.

“Strictly Dedicated” is just what it seems. It’s a groovy, laid back track, where Mike G and Baby Bam give their shout-outs to everyone who helped make them who they are……creative, yet unheralded giants in the hip-hop world.

The lyrics aren’t challenging to the mind, yet are a breath of fresh air to a genre that has been dominated by the swagger of the thug world and the pessimism of what street life is viewed as; money, sex, drugs, and death. The album has a lighter feel to it, and although it isn’t set on one style, the change of pace from track to track takes away the monotony that most rap albums have had the last few years.

The bright sides of this album outnumber the negatives by many, and it should be looked back as another album the true hip-hop revelers will pop in their car CD players and just feel good about what hip-hop once was. That is the feeling of sport and the love of life, and not the materialism in rap that has flooded your local record shops.