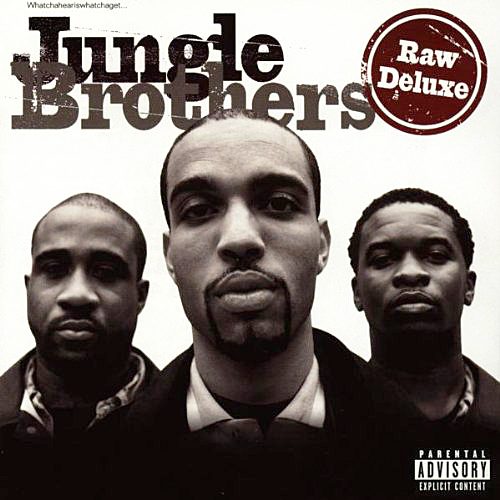 What to expect from the Jungle Brothers? They started out as equal partners in the Native Tongues but have been overshadowed by both De La Soul and A Tribe Called Quest. The words “amazing” or “genius” would seem at odds with the JB’s, but they’ve still made an impression bigger than that of Chi-Ali and lasted longer than Black Sheep. I’m a massive fan of the Native Tongues though and consider the Jungle Brothers to be, well, quite good. The three albums that precede “Raw Deluxe” were all good; in fact, each was better than the previous effort. “Straight out the Jungle” sounds like it was recorded in Afrika’s bedroom but showed some talent. “Done by the Forces of Nature” includes some nice funk and soul moments but sounds incredibly dated, more like a novelty record when listened to in the modern musical climate. “J Beez wit the Remedy” was different and better, but seems to have been overlooked by all but the most avid hip-hop heads.

It’s probably unfair to compare The Jungle Brothers to De La Soul; after all, who wouldn’t pale in comparison to those giants? Still, they’re a fairly talented group. But again, what to expect? The cover sees Sammy B, Mike G and Afrika in black-and-white staring deadpan at the camera. A “Parental Advisory” sticker adorns the bottom corner. This record is obviously not going to be the same innocent beats and rhymes heard on the first two albums. Of course it’s unlikely that the Jungle Brothers have reinvented themselves as gangsta MC’s but I still wasn’t at all sure what to expect when I first put the CD into my hi-fi.

What I first noticed was the production. Out with the endearing, if cheesy, funk of earlier and in with a more restrained and glossy production. Most tracks sounded OK but many were a bit boring, which is not good at all. At least if some underground MC tries a crazy concept or ten on his album and it sounds wack, he tried. He wanted to a entertain me and fell flat on his face; I give him props anyway. With this, the beats are just sort of glazed over: insipid is probably the best word. It doesn’t help that the rhymes are only marginally better.

Another few listens and some of my disappointment had gone. The biggest positive is track 10, “How You Want it We Got It” (Native Tongues Remix). It has great production; a sort of understated and fuzzy sample and simple drums courtesy of Roc Raider (of X-Ecutioners fame). This is one of the few instances where the production sheen goes and we see the Jungle Brothers at their best. This is a great posse cut: skills coming from the Native Tongues who have updated the Daisy Age with some success. Ominously this best track is the one that features guest MCs the most heavily. Q-Tip is quite good, but nothing special. Afrika’s verse too is simple but nice:

“Verbal grammar,
Coming at you like a black panther
Check the sampler;
The microphone man handler”

Unfortunately he’s completely outclassed by both Dave and Posdnous. Pos drops this great verse, first bragging about his own skills, and then dissing the competition:

“Similar to water out the clouds
I’m here to reign supreme;
Self esteem is lower than them rides in Cali
Is the reason why these niggas rally
Around the bull shit, rub-a-dub, you can’t pull shit”

There’s a nice track called “Handle My Business” with a slow, mellow beat from Djinji Brown (no, I’ve not heard of him either). It’s nothing too advanced, just a good sung chorus and some decent flows in between. Also, “Where You Wanna Go?” is a love song of sorts with some charm. The verses of the MC’s are pleasant but never once was I really struck be a lyrical gem from the J Beez themselves; and the beats are okay but not particularly inspired. Then there’s “Jungle Brother (True Blue)” which was a single and does have some energy about it. It has the capacity to be a real gem but seems a bit subdued, and not at all like the warm and more embracing sound of “How You Want it We Got It.” Except for the producers mentioned above most of the music is handled by the group themselves, presumably Afrika.

Maybe I have just never appreciated the Jungle Brothers, but they never seem that unique or special. Take the MC’s for example – Afrika’s verse above is okay, but what’s he actually talking about? Just some vague bragging about being like a “black panther.” Then if you look at Pos (although seeing the words written on a page do no justice to them) and we see clever sentence structure, metaphor used and entertainment given. Similarly, the beats never really zing. You are never caught off guard by an unexpected sample or really weird drum pattern. We are presented with the same slabs of boring beats with mediocre rhymes sprinkled on. Sometimes the weaker beats can survive with powerful rapping, but that’s not present unless genius friends like De La Soul drop by the studio. The J Beez were onto something with their third album but, when compared to their Native Tongue compatriots, this album smacks of mediocrity. One banger is not to compensate for eleven weaker cuts.

If you are a long term Jungle Brothers fan than this album may not disappoint you. My advice if you’re not, however, is this: if it’s Native Tongues flavour you’re after, go and buy “J Beez wit the Remedy” or “Stakes is High.” If you want some quality wordplay try something fresh and new like Saul Williams. This is a good album, but it fails to deliver on both counts.