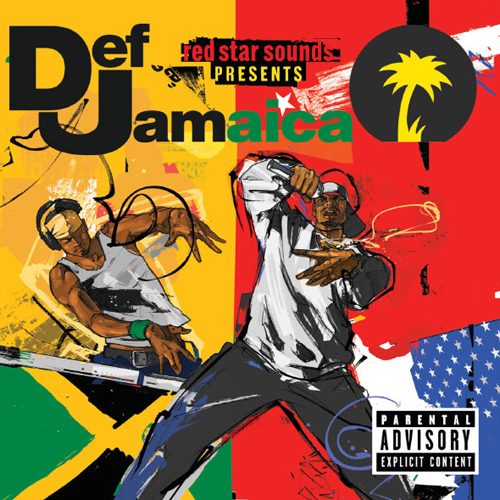 The concept of hip-hop artists working with dancehall artists isn’t new. Bounty Killer and The Fugees. Capleton and Method Man. Sean Paul and Busta Rhymes. What’s even older though is the soundclash – a Jamaican tradition brought to New York where rival crews compete to throw the best jam with the biggest boom. What we think of MC’s today were actually called deejay back in those days, who would scat and spit over riddims from the selector (what today we call the DJ) to promote their soundset and give shoutouts to the members of their click. These soundclashes had the bass, the beat, and the rudebwoy stylee which would fuse with urban poetry and the influences of funk, rock, and the blues to create the hip-hop style.

As deejays rose in prominence and the selectors became interchangeable, many forgot about that Jamaican heritage and the legendary pioneers like Kool DJ Herc. Over the last two decades several attempts have been made to bring the old school back, and “Red Star Sounds Presents Def Jamaica” is the latest. Def Jam’s formula is to put today’s modern rap artists over the swinging sounds of slackness while sharing the limelight with deejays like Spragga Benz, Lady Saw, Elephant Man and Buju Banton.

This reviewer included, most heads today won’t recognize the list of producers in the liner notes: Matt ‘In the Hat’ Stein, Tony ‘CD’ Kelly, Donovan ‘Vendetta’ Bennett, and Steven ‘Lenky’ Marsden among others (these people take their nicknames seriously). The only names that might ring a bell are Sly & Robbie, who lace up the pulsing “True to Me” featuring Major Damage, Anjulah, and the British rapper Blak Twang. It’s a natural mix since the slang of many UK spitters sounds more heavily influenced by the Carribean than their American counterparts. There are plenty of smoothly blended sounds though. “Together” puts the Jungle Brothers with Black Ice, DYCR, and La Bruja and floats like a tropical breeze. “Girls Callin'” by Elephant Man and Ghostface Killah is a hardcore anthem guaranteed to get your feet tapping. Perhaps most curious and pleasant of all is “Nah Mean” featuring the X-Ecutioners and Delano from Renaissance. The X-Ecutioners cutting on is “FIYAH” to listen to. Why don’t more turntablists mix with reggae?

There are some throwaway tracks on this album. DMX’s “Top Shotta” was already heard on the Belly soundtrack, and wasn’t that fresh back then. The “Frontin'” remix featuring Vybz Kartel and Wayne Marshall is okay, but if Cipha Sounds, Maz Glazer and Disco D wanted to impress (did it take ALL of them to remake a Neptunes track) they would have changed up Pharrell and Jay-Z’s duet a bit more. Speaking of Marshall and Kartel, they duet with the Dipset (Juelz Santana and Jim Jones) on “Straight Off the Top,” which features an annoying falsetto on the hook and an unethusiastic beat, despite Santana’s good showing on the rap. Cam’Ron fares a little better working with Buju Banton on “Sweetness” though.

“Red Star Sounds Presents Def Jamaica” succeeds on the whole, on the strength of songs like “Lyrical .44” featuring Redman, Method Man and Damien Marley, and “Anything Goes” combining Capone-N-Noreaga with Lexxus and Wayne Wonder. Whether these songs will rock a close minded hip-hop audience who may be more used to Just Blaze and Swizz Beatz productions is uncertain. The open minded listener will appreciate the nature of rap coming full circle to it’s soundset roots though, and the rappers who appear on the album by and large seem to have understood the concept and felt happy to share their time with chatters who may be as big in Jamaica as the MC’s are in New York. “Def Jamaica” bridges the waters splitting the two and creates one musical whole.