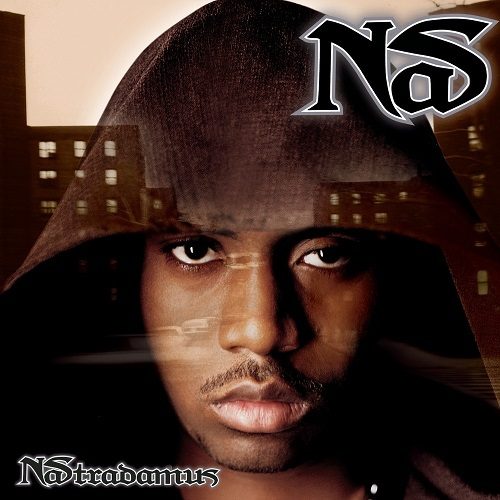 Nas seems to be in a hurry these days. After producing only two albums in four full years, his second in LESS than one year has hit the store shelves. You might think this eeriley mirrors DMX’s career – but Nas may just have more to say. You might think that this is an opportunity for Nas to put out those classic bootlegs from the “I Am” album in a more official format – but Nas might just be prodigious enough to have recorded all new songs in the interim.

A little of all of the above proves to be true. Topically not much has changed for Nas – it’s about the money and the life. So if you choose, Hate Him Now. One other thing has not changed about Nas – on the microphone he has a smooth flow and a knack for telling stories. Coupled with smooth producers like L.E.S. on “Life We Chose”, DJ Premier on “Come Get Me” and Dame Grease on “God Love Us” the music hits the spot. On the latter especially Nas makes a rather eerie and historically true reference: CRIMINALS were hung on the cross, not just Jesus Christ. It’ll make you stop and think for a minute. Maybe Tupac was right about heaven after all..

On the downside, there is some material that’s either poorly considered or poorly executed – maybe a little more of it than on his previous “I Am” release. For one, Nas may score on the pop market and video crossover circuit with “Nastradamus”, but the chorus is cornball and the funk beat is yet another thriving example of how far ahead of their time EPMD was a decade ago. “Shoot ‘Em Up” sounds like a silly version of a Christmas Carol gone thug (and personally, I prefer Eazy-E’s “Merry Muthaphukkin Xmaz”) and the appearance of a relatively unknown group of nobody rappers called the Bravehearts on “Quiet Niggas” brings yet another Nastradamus prophesy: guest appearance = forgettable forthcoming debut album in year 2000.

Typically for a Nas album, the pluses outweight the minuses, although the margin of victory might not have been as slim if Nas had included more of the unreleased bootlegs besides the excellent “Project Window” with Ronald Isley. After this long one might assume that the rest of those songs have been assigned to the dustbin; since they’d be seriously outdated if released in the year 2000. Don’t blame Nas for this. Blame the bootleggers who thought it was clever to distribute his entire album for free in MP3 on the internet. People get stabbed over this shit; just ask Lance ‘Un’ Rivera. Nas fans will not be mad at this release; even though he fucks with the triple-rhyme again on “Big Girl” and Ginuwine pops up on “You Owe Me”. It’s more of what you expect from the King of Queensbridge, and it’s (almost) all good.