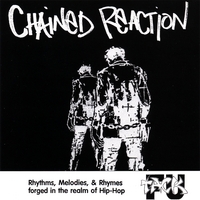 If you haven’t followed the (somewhat controversial) career of Tack-Fu up until now, you’re in for a treat. Stung by accusations that the hip-hop beats on an early release were straight jacks, Tack-Fu set out to prove the doubters wrong by releasing steadily tighter and tighter hip-hop tracks. This latest compilation straight out of Iowa City (yes, you heard me right) features the hottest MC’s and beats that he’s had down yet.

“Altar Beast” is like that cross between an extemperaneous jazz jam session and a hardcore spoken word poetry slam that found common ground right in the middle. Set off by a plucky bass and rhymed expertly by Joe Juggla (who sounds like the long lost member of Freestyle Fellowship) this song will have you snapping your fingers and stomping your feet to the funky beat. “Personality” is dope in the exact opposite way – a slow soothing groove with spitting by Angle and cutting by Richie Heller and Nate Unique, you’ll unwind your way into pure sonic relaxation.

Of course, it couldn’t be a Tack Fu album without some bizarre ass slammin jams, like the upbeat “Throw Your Middle Finger” or the spaced out “Matter of Time” (with a guest appearance by Philadelphia’s own Braille) or the pure instrumental funk of Tack’s “Brimstoned Hymn” and the especially demented “Guru Dude”; both of the latter coming ostensibly on “side two”.

If you have a hard time finding this album of innovative ass instrumentals, new age MC’s, and independent hip-hop at it’s truest roots, fear not. Just pay a visit to Tack-Fu’s own site at http://fly.to/tack-fu to learn more about how to cop a copy. It’s well worth the trouble. Don’t front on the Tack-Fu funk!