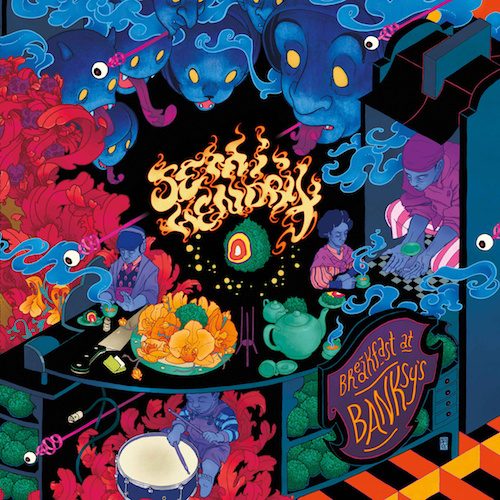 It’s been great to be a Ras Kass fan recently. Firstly, he returned with a vengeance last year aside Mello Music Group’s resident heat maker Apollo Brown on “Blasphemy”: a scathing, thumping release that brought Ras Kass back from the underground doldrums. Earlier this year, Ras Kass’ classic debut LP “Soul on Ice” was re-issued, which for physical collectors was a revelation given the astronomical prices the original printrun was commanding. His latest album follows last year’s successful collaboration with Apollo Brown by seeing Ras Kass connect with Jack Splash, together going under the guise of Semi Hendrix.

If you’re unfamiliar with Jack Splash (as I was), he’s actually a Grammy award-winning producer that has worked with Kendrick Lamar, Alicia Keys and Cee-Lo Green. This versatility lends “Breakfast at Banksy’s” a much bigger sense of variety than any of Ras Kass’ previous albums. It’s good to hear a West Coast legend testing themselves with all different types of instrumentals, whether it be slow and smooth R&B alongside Teedra Moses on “Heartbreak”, snappy throwbacks on “Don’t Hurt My Feelings”, or fast-paced, technically astute rhymes on “Think About It”.

Ras Kass’ playful, obnoxious persona is the perfect foil for Cee-Lo Green’s catchy hook on “Sex Pistol”, showing a side of the veteran’s skillset that is rarely seen â€“ mainstream crossover appeal. It’s typically brash, with references to lipstick-stained zippers so it’s unlikely to find its way on to national radio playlists unless a clean version is released. A similar formula works less well on “Stone Cold Hustlers” featuring Raheem DeVaughn, but does on “Heartbreak”, a smooth R&B track with Teedra Moses.

The spine-chilling “Jesus Pressed Mute” boasts an insatiable beat that begs to be listened to repeatedly. It’s a good job too, because the backend of the album suffers from a lack of energy when compared to the first half. To move away from the more generic gangsta rap that Ras Kass has toyed with previously, is a brave move and feels like a mini-revolution, at least until the album starts to dissipate after the raucous “Jesus Pressed Mute”.

Jack Splash’s production has shown that there’s plenty of rhyming left in Ras Kass with the likes of “Loogies” showcasing an emcee who sounds twenty years younger than he really is. There are moments where his experience can work against him (such as “Niggnorance”, a track all about the short lifespan of current rappers and their willingness to act ridiculous for money) but for the most part, “Breakfast at Banksy’s” is proof that “Blasphemy” wasn’t just a return to form from Ras Kass, but the start of a second wind.