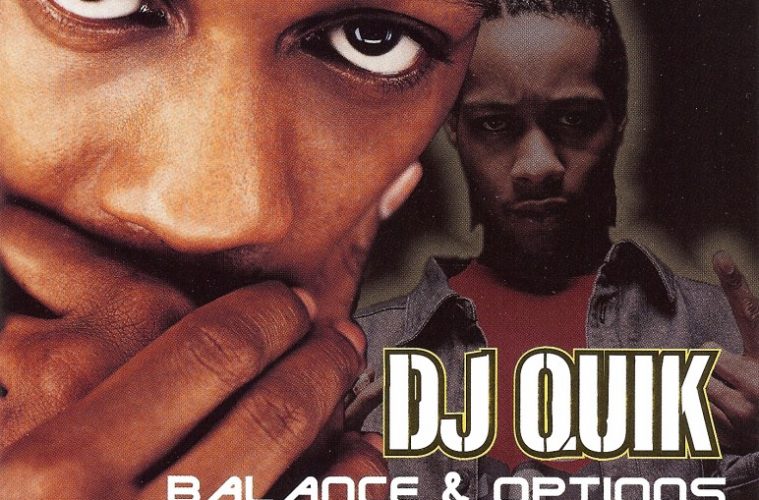 2000 is a good year for fifth albums in rap. Cypress Hill already put out theirs, De La Soul is releasing one later this summer, and DJ Quik is right in the middle with “Balance & Options”. The amazing thing about Quik’s long career is that he hasn’t received the props or recognition either of these other two artists have.

“Now I still be knockin bitches like it ain’t shit
because I’m dynamic, I program it and make it hit
whether I’m in Dada jeans or Craig Silk slacks
flyness be the reason that my shit cracks cause
when I’m on the beats I’m fuckin all y’all up
then I get up on the mic and scoop up all you mutts.”
–> “We Came 2 Play”

The lyrics indicate ain’t much changed for Quik musically or lyrically, except getting tighter. Family still gets props too – AMG, Mausberg, and Suga Free all put in work as well as some special guests. Trying to find something wrong with a Quik album is pretty hard; so you’d have to either not like funky grooves, hate explicit language (what are you doing reading this anyway), or have no love for a party. Yes, just like the fools who refuse to “Pitch In Ona Party” at Quik’s crib, you’re just knocking shit over and leaving empty bottles everywhere – ingrateful ass guests. Never let it be said that Quik didn’t have a sense of humor too!

If anybody was going to make a sequel to Digital Underground’s “Doowutchalike” then it was bound to be DJ Quik, and he kicks the funk with Humpty Hump and pals on “Do Whutcha Want” – even AMG gets in on the mix. From the funny party to the smooth groove Quik keeps it moving – “Well” features Mausberg and Raphael Saadiq getting absolutely SMOOTH in the mix and “having fun from Japan to Compton”. Quik even bangs on clowns internet style and threatens to “put you on the web, you pervert” on “U Ain’t Fresh” with Erick Sermon. All the bases are covered!

Don’t front, Quik is such an uber-producer he doesn’t even need to rap on every track. From “Roger’s Groove” (obviously dedicated to the late Roger Troutman) to his own “Quik’s Groove V” you can just kick up your feet and bop your head to the beat. To be this funny, smooth on the mic, and adept at producing music all rolled into one should be a crime – like lifting this CD is when you front on paying 14.99 for Quik. Don’t even try; you know it’s worth every penny. Whether you love East coast hard, Down South bounce, or West coast freestyle, there’s only one coast for Quik’s music – universal. Between not embarassing himself with his own raps and keeping an excellent guest roster on tap to provide their own rhymes, Quik has put together an A+ summer album to ride to. Third time is no longer the charm, FIFTH is.