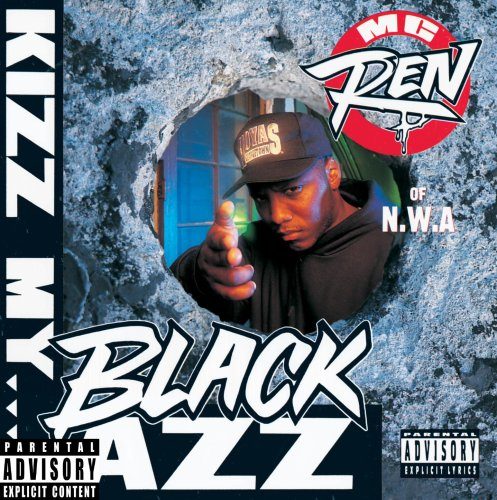 The EP is about as alive today as the 8 track and the 7″ single: sure, you’ll see one around every now and then, but more than likely, most people will pick it up and go, “Aww shit, only 5 songs? Whatever,” and set the shit back down. Why they do this when the majority of albums are lucky to have 5 decent songs for about 16 dollars is beyond me, but these two EP’s, along with Digital Underground’s “This is an EP Release” also released right around the same time, rekindled a little interest in the hip hop crowd in the dying format. While it may not be as long, the intent is to hook you, satiate you until the full length actually drops, and in the case of these two, be a strong standing work of art in it’s own right, albeit in shorter form than usual.

MC Ren dropped “Kizz My Black Azz” hot on the heels of their multi-platinum chart topper “Niggaz4Life”. It was a shocker back then, that an album as violent and straight fuckin gangsta as “niggaz..” would top charts. Now DMX farts on a bass drum and barks at you and it goes #1 in the first week; but I digress.

At that time, Cube had gone nuts. Eazy everyone knew about. Hell, Dre had even started rhyming (more on that later) but Ren, widely considered the real “MC” in the bunch, had yet to drop anything solo, so the EP came as a blessing to heads wondering if Ren could drop that ill shit on his own.

And hell yeah he did, but honestly, he’s not the best thing on this EP; Bobcat is. His production (he worked for LL, too.) shines crazy on this disc. “Paul’s Boutique” style layers of samples, thick bass souping up the hard and scratchy drum breaks provide amazing sonic backdrop for Ren’s distinctive voice to flow over. Hell, the second best song on the EP is Bobcat’s instrumental “Intro: Check it Out Y’All,” a funky as fuck cut and paste job that runs a grip of Ren vocal samples into each other seamlessly as if Ren had meant for the lines to always go together that way. Underpinning the turntable trickery is a bubbling, everchanging array of samples and noises that recall that same era’s Bomb Squad production, but with it’s own West Coast twist (the bass is deeper and the beat is slower).

But that’s not to say Ren gets overpowered by the groove. He wouldn’t be The Villain if he did. On the high tempo title track, he spits flame at quite a few (unnamed) people in the industry, as well as jealous bastards. In hindsight, some of his rants seem a little off (“I’m tired of rappers with live instruments on the stage/save the shit for parades”) but that’ll happen when you’re listening to shit from 1992.

“Final Frontier” is powered by a beefed up, juiced beat that incorporates “The Bridge is Over” and is anchored with a catchy ass vocal hook. If I remember right, the hook got turned into a T-shirt, actually. To tell the truth, the song is basically a pop party jam, but perverted and dirtied up. Where you’d have “the girl looked fine, I stepped to her” and variations thereof, you instead have “It’s just hardcore niggaz actin crazy on the stage/wearin gangsta clothes, yo, and spittin on the hoes”

“Hound Dogz” is aiight enough, nothin real special, and “Right Up My Alley” is some of that Ren flavor that cats were already familiar with from N.W.A, but the cut that kills it for me, the cut you should buy the album for, is “Behind The Scenes.” A crazy story rhyme, that crosses the line maybe once or twice (shit, the last verse deals with a family orgy) it’s nonetheless a fuckin bomb ass cut. Beat is definitely off the hook, the coda at the end is depraved perfection (DJ train ceaselessly cutting up “She like suckin on DICK” from N.W.A’s “She Swallowed it”) and the storytelling ability of Ren shines.