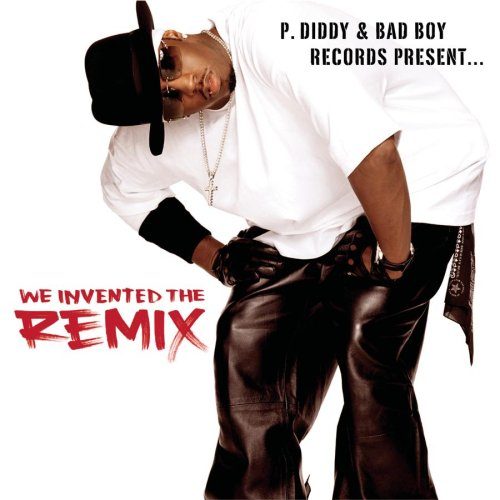 P. Diddy :: We Invented the Remix

Although it may be interpreted as haterism, it still needs to be said – the title of this album is BULLSHIT. An accurate description of Sean ‘P. Diddy’ Combs resume in an album title would be “We Made the Remix More Popular.” As a label owner and occasional producer in the 90’s he oversaw a series of remixes that were pop and hip-hop hits, but remixes were around long before people ever heard of Puffy. To me, nothing will ever top hearing Boogie Down Productions rework “You Must Learn” into an anthemic call to arms, or A Tribe Called Quest taking the “Scenario” to another level with the tragic guest verse of Hood – his first and LAST verse ever recorded on wax. Even I have to recognize though that before these songs came around, hip-hop “remixes” were a regular sales pitch in the 80’s for fickle fans not willing to shell out for a single whose song was on the album they already bought. “Invented?” N*gga please.

With that out of the way, P. Diddy’s compilation album itself is a very self-congratulatory exercise in pointing out that when P. Diddy and his Hitmen are involved, reworked songs tend to be big hits. Several of those hits are included here, including two versions of “I Need a Girl” (Part One is the radio hit featuring Usher, the lesser Part Two features Ginuwine), G. Dep’s “Special Delivery” update with Ghostface Killah and Craig Mack, Ashanti’s “Unfoolish” remix with recycled B.I.G. lyrics, and 112’s hip-hop versions of “Peaches & Cream” with Ludacris and “Dance With Me” featuring Beanie Sigel. For some reason though, Diddy is so cheap he can’t even devote two seperate tracks to two of his BEST remixes: he combines them into one track which leaves all of “Dance With Me” other than Sigel’s verse completely removed.

If that and the “Foolish” remix were Diddy’s only bad choices (that’s bad meaning bad, not bad meaning good) there would be little to complain about. Unfortunately if he intended to prove that his crew’s remixes are always hits or improvements on the originals, this album fails miserably. As my fiancee said of the “Bad Boy For Life” remix – “What’s the point? They just took the beat and reversed it.” This incredibly unoriginal idea (Pumpkinhead did it better on an underground rap remix half a decade ago) is also a bad choice with a rock guitar beat; it just sounds terrible backwards and doesn’t do stellar guests like Busta Rhymes and M.O.P. justice. The “So Complete” remix isn’t much of one at all; it’s just the same beat with more lyrics. A new version of “Notorious B.I.G.” from Biggie’s post-humous “Born Again” album sounds weak and tinny compared to the bombastic original. Worst of all is the remix of P. Diddy’s “That’s Crazy,” which in itself was a remix of Black Rob’s “Whoa” to begin with. Snoop Dogg and Missy Elliott are great guests on any song and shine here, but this song is still just the same beat as the old version with new lyrics. At least the FIRST “That’s Crazy” SOUNDED different from “Whoa.”

At the bargain basement price of $8.99, P. Diddy’s incorrectly titled “We Invented the Remix” might be a nice investment. The remixes of “Special Delivery” and “I Need a Girl” are among the hottest songs on the charts right now, and buying CD singles for both would cost more than this album does. Otherwise there’s nothing special about “We Invented the Remix” whatsoever. If anything it proves that some songs DON’T need a remix, and even those that do should be given better treatment than the selection was here. If you can’t find the album on sale or at a comparable price it’s just not a good investment. The only thing P. Diddy “Invented” here was a mediocre album.