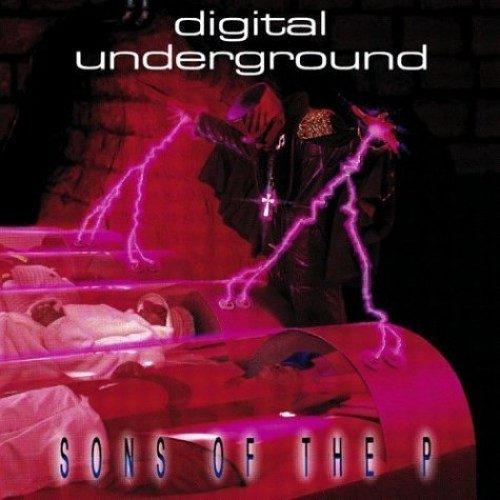 Digital Underground :: Sons of the P

After “Sex Packets” and it’s runaway monster jam “Humpty Dance” had wreaked havoc on dancefloors and rides, there were people that derided the group as your basic P-Funk wannabees, the latest in a group of people picking at the bones of Dr. Funkenstein. There’s been a history of groups who blow up because of one thing, and afterwards, in their quest to be respected as “Serious Artists” they abandon what worked and try to distance themselves. But not Digital. “Sons of the P” affirmed their P-Funk affinity, and by showcasing George Clinton himself on the title cut, were basically anointed the natural progression of P-Funk into the hip hop area. Digital Underground didn’t quite stay with their bouncy pop funk, but actually dug deeper and, on this more musically challenging and at times darker toned album, got even FUNKIER.

The album, not so much a collection of singles like “Sex Packets,” has a running comic book like theme, similar to Parliament’s classic funk LP’s. The opening track “the D-Flo Shuttle” is about the train the members have to take to reach the surface from their underground funk lair, where various experiments by Dr. Greg Cook go on. The song is melodic and crazy hummable, very infectious. You think it’s the continuation of the fun party vibe from Sex Packets..

And then the album switches up to “Heartbeat Props” a track exhorting people to pay more attention to the men and women working hard as hell to make life better for black people today, reminding us that we don’t need to wait 30 years to appreciate what people are doing out there. A group track with a dope message and even doper MC synergy, as the MC’s bounce, slide, and complement each other perfectly over an ingenious jack of “Knot Just Knee Deep” by Funkadelic layered on top of gurgling, insistent funk.

Back to the crazy fun shit, and it’s Humpty’s solo shot, “No Nose Job.” Not just a jokey one-liner fest like “Humpty Dance,” this song sports a message too, that black artists need to be responsible for their images, and recognize the influence they have on youngsters. A not-very-thinly-veiled shot at Michael Jackson, the song is a balanced blend of comedy, seriousness, and party funk. The song was the birth (and death) of the “Bumblebee” scratch, which consists of basically just erratically shoving the record back and forth without touching the fader. For about 2 minutes. But while it’d be irritating as fuck anywhere else, the funk groove here actually makes it work.

And then, comes the title track, THE Digital Underground funk opus. Running about 10 minutes, the track is a slow bubblin chunk of stop-start drums and various noises, all building and bouncing off of each other as Shock chants this mantra over and over: “Release your mind and let your instincts flow. Release your mind and let the funk flow.” Piano stabs accent the track, and George Clinton himself shows up, gets a monologue, and blesses the DU collective as “The Sons of the P,” heirs to the throne, and tells them to go forth and funk. And, whooo, do they. This track is hip hop funk incarnate.

“Flowin on the D-Line,” is a story rhyme about Shock-G’s trip on a Bay Area train, and it honestly ranks up there with the best efforts of Slick Rick’s stories. One verse, it sets mood, paints the vivid picture in your mind, and effectively puts your ass right next to Shock’s as he macks “two russet potato and bacon eatin sisters” who just got on the train. The beat, a slinky reworking of a Jimi Hendrix blues song, complements the lyrics perfectly, and to finish the track out, Jay-Z (not THAT Jay-Z) blows the shit up with an ill scratch display.

Then there’s the hit single, the straight pop confection “Kiss You Back.” Which was basically the hook over and over again, with slight variations (even more variations than the radio version, with Humpty twisting the proceedings to his perverted vision: “if you look real cutie I’ll play with your booty/If you hold my nuts,”) the track nevertheless blew up because of it’s basic nature and propulsive boogie beat locking it down. Even the simple party tracks by DU have heavy dense layers of funk hooked up underneath it.

“Tales of the Funky” is a look back at the history of funk, and while there’s no way you can cram that much history into a 5 minute song, they give it a nice shot. The beat bounces, but doesn’t quite get the head nodding as much as the rest of the album has. You’d think a song about the fathers of the funk would get the funkiest track, but hey..The chorus compensates, an energy-infused chant that grows as the song goes.

“Higher Heights of Spirituality” is an interlude, and as such, should be skipped. “Family of the Underground” is a showcase for all the Underground affiliated MC’s to go off. Some (Shock, Money-B) come off nice, but the others show why they dont’ get any other airtime on the album..This track features Treach and Tupac at the beginning, and if only those two actually got off on the track, it’d be redeemed, but instead, regardless of the beat, it gets the fast forward button.

And then you get the other story rhyme, the best song on the damn album. Tupac again shows up, with this warning: “Okay parents. Go ‘head and tuck the kids in. PG time is over. This goes out to all the macks in the industry. Okay, roll tape.” And then, respect due to Too Short, Digital Underground drops the best pimp story rhyme ever recorded with “Good Thing That We’re Rappin.” a chopped up keyboard line, 2 or 3 different drum samples, and Shock and Humpty and their alter egos (Which has gotta break Kool Keith’s record with 3 different alter egos on the same song) tell the story of how they made the trip out west, and their adventures in the pimp game in Vegas and Los Angeles. Hilarious, yet it’s cinematic like Biggie’s and Kool G’s best shit. Truly a movie for your mind, complete with credits of a sort, as Shock and Big Money Odis, over a smoothly crooned chorus, shout out all the pimps and hoes they know. 13 minutes of pimp funk, and one of the better permutations of a famous “Atomic Dog” line, and a sense of authenticity in the story that you just don’t get too much anymore.

This album expands and goes deeper than it’s predecessor, and to this day, still stands as the best effort Digital Underground ever put on wax. Eclectic, topical, and earthy while based in a fantasy land first birthed by P-Funk, the album is a must in any hip hop heads collection. Sex Packets is the more popular album, but “Sons of the P” is the more worthwile offering. Besides, you can’t get funk like this in hip hop too much anymore. Snatch it up and soak.