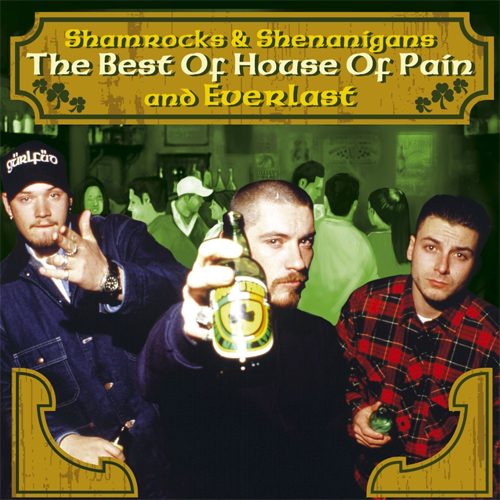 You’ll not see this review until the 18th of March, but as I write it millions of people around the world are celebrating St. Patrick’s Day. To be perfectly honest about it most of the things my loutish American brethern do on this day have little to do with Ireland, let alone St. Patrick. Drinking green beer is certainly NOT an Irish custom, and I am reliably informed that no one in Ireland eats corned beef and cabbage on March 17th – it’s a wholly American invention. In fact I’ll venture to say that very few participants in the festivities of St. Patrick’s Day in the United States even know who Saint Patrick was or why he should have a special day of celebration. Even historians have a hard time agreeing on his good works as he was born so long ago that stories of him have blended together into a mishmash of folklore and fact. I’ll not try to clarify things here for three reasons – I’m no expert, I’m not Irish in any significant way (the best description of my heritage would be MUTT – I’m a little bit of everything) and you’re here to read a rap review and not a history lesson. Nevertheless it seems worthwhile to point out the fact I’m writing this review on a day widely considered to represent Irish Pride. I was entirely unaware of this concept until I was introduced to the music of House of Pain while in high school. To that point in hip-hop white participants generally speaking had validated themselves on a combination of paying massive dues, growing up poor in urban neighborhoods, and receiving the begrudging approval of skeptical black peers.

With so much black pride in rap, any group declaring “white pride” would have been run out of town quicker than David Duke in Harlem. Unintentionally or otherwise though the members of House of Pain stumbled onto a formula for instant acceptance – fine Irish malt lyrics poured out over heavy beats by DJ Lethal and DJ Muggs. The latter had already won over rap fans worldwide for his work on Cypress Hill’s eponymously titled debut, while the former had already toured and recorded with HOP frontman Everlast for years. When the two decided to team up with Everlast’s high school homeboy Daniel O’Connor (better known as Danny Boy) the concept became clearer than a bottle of vodka – emphasize Irish pride as they expressed hip-hop music and culture. While Vanilla Ice was derided for his fake persona of being from the streets and silly abuse of catchphrases like “word to your mother,” House of Pain had an undeniable aura of authenticity. They weren’t claiming to be real – just really Irish – perhaps stereotypically so. They were a trio of beer drinking hooligans who loved to rap. Long before the Shop Boyz learned how to party like rock stars our besotted Irish heroes were exhorting kids of all races to get up out their seats and “Jump Around” like they were in a mosh pit. Thanks to an infectious song which sampled everything from Prince to the “Harlem Shuffle,” the song was a wildly successful mainstream hit with lyrics many of my peers can undoubtedly still recite verbatim.

“I’ll serve your ass like John McEnroe
If your girl steps up, I’m smackin the hoe
Word to your moms, I came to drop bombs
I got more rhymes than the Bible’s got Psalms
And just like the Prodigal Son I’ve returned
Anyone steppin to me you’ll get burned
Cause I got lyrics, but you ain’t got none
If you come to battle bring a shotgun!
But if you do you’re a fool, cause I duel, to the death
Tryin to step to me, you’ll take your last breath
I got the skills, come get your fill
Cause when I shoot the gift, I shoot to kill
I came to get down, I came to get down
So get out your seat and jump around!”

It’s worth briefly mentioning that DJ Muggs and DJ Lethal are both as Irish as I am (meaning in no discernible way) yet they engaged in a war of musical one-upsmanship on House of Pain’s debut which put the concept of Irish Pride onto the hip-hop landscape. The result was classic songs like “Shamrocks and Shenanigans” which to this day are as corny as they are funky. Everlast was not then (nor is now) the greatest poet to put pen to papyrus but there’s charm to be found in his hedonistic verses, glued as they are by DJ Lethal to samples of John Lee Hooker and Booker T. & the MG’s.

“I kicks the flavor, like Stephen King writes horror
If I was a Jew then I’d light a menorah
I got rhymes for ya, excuse me senora
Are you a whore or, are you a lady?
Is it Erica Boyer or Marcia Brady?
Let me know hon, the deed’ll get done
Just assume the position, I’ll take my rod
and then I’ll go fishin, I’ll get your river flowin
I’m always in the know when, it comes to givin pleasure
I’m every woman’s treasure
I came to work your body, so let me do my job
I’ve never been laid off, my rhymin skill paid off
Cause now I’m makin records, now I’m makin tapes
Steady bustin suckers in bunches like grapes
Makin all the papes, scoopin’ up the loot
Puttin suckers on the run, pull my gun and then I shoot
I never been a front, I never a fraud
I got a natural skill, for that I thank the Lord
Cause I feel blessed, I’m casually dressed
I always got my gun, but I never wear a vest
I’m quick on the draw like the horse named McGraw
From the cartoon boom sha lock lock boom”

Unfortunately despite having created a new movement in hip-hop that sold millions of their CD’s and made them household names, House of Pain fell victim to heightened expectations and lowered interest in their subsequent releases. Those who have heard the recent folk singing of a reinvented Everlast on “What It’s Like” would barely be able to recognize the beer drinking fight starting rapper of the early 1990’s or vice versa. “Shamrocks & Shenanigans – The Best of House of Pain and Everlast” tries largely unsuccessfully to pair the two together. The album is dominated by lesser known House of Pain songs which are hip-hop classics in their own right that never achieved the recognition and fame of “Jump Around.” The hard pounding bass of “Who’s the Man” from the soundtrack of the same name featured one of underutilized Danny Boy’s most hard-hitting raps: “I’ve always got my gun, it’s that old six-shooter/I’m the king of the neighborhood, crazy white peckerwood/People thinkin Danny lost his mind!” The equally obscure “Punch Drunk” comes from a Whoopi Goldberg movie as bad as this song is good – a simple ode to getting rowdy punctuated with a chorus that samples Tha Alkaholiks. Stellar examples from their slept-on sophomore release include “On Point” and the slow flowing Diamond D produced “Word Is Bond.” It’s really hard to reconcile these hardcore hip-hop tracks with the crooning Everlast does on “Black Jesus”:

“They call me White Devil, Black Jesus
Heaven closes, hell freezes
Egos trippin, scripts keep flippin
Bloods keep bloodin, Crips keep crippin
Time keeps slippin and I keep fallin
I can’t see but I hear them callin
Ballers ballin, players playin
Haters fightin, righteous payin
Dawn breakin, I can keep makin
Brooklyn keep takin, shook ones keep shakin
No time for fakin, not me
I ain’t jumpin no bars, just risin like cream
And if you diggin the scene, you feelin the vibes
Throw your hands in the air, scream out you alive”

One might argue that with only three rap albums under their belts before they disbanded, there was not enough House of Pain material to formulate a “Best Of” album unless it was supplemented by Everlast’s solo material. One would be ENTIRELY WRONG about that – as wrong as you’d be for trying to dine on a plate of corned beef and cabbage in Dublin. Unfortunately this compilation exacerbates the error by including Everlast’s solo material from BEFORE he was in House of Pain, songs far cornier than any dish served on St. Patrick’s Day. “I Got the Knack” only served to prove he DIDN’T while “The Rhythm” is more notable for guest verses by Donald D and Ice-T (all three were in the Rhyme Syndicate posse) and a new jack swing beat than for Everlast’s milktoast flow. When you consider that House of Pain songs like “Top O’ the Morning to Ya” and “Fed Up” were ignored in favor of these weak tracks, the concept of a “Best Of” album falls entirely flat. While “Shamrocks & Shenanigans” is a worthwhile compilation from a historical hip-hop perspective, the same holds true for buying this album as writing this review – you didn’t come for a history lesson. It’s a shame all parties involved thought highly enough of House of Pain to do this album yet didn’t do it RIGHT. Now if you’ll excuse me I’m going to go drink a few pints of Guinness and try to wash the bad taste Everlast’s solo tracks left me out of my mouth.