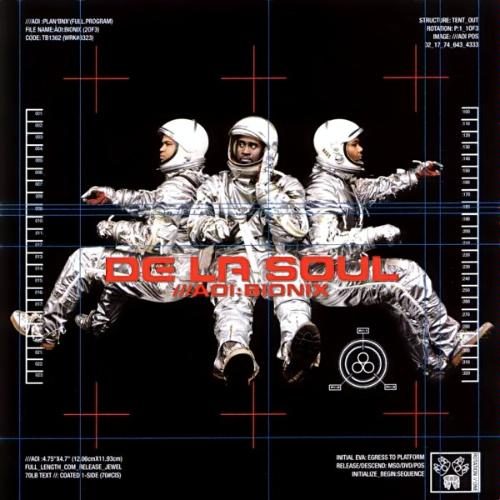 Sitting here with a glass of Southern Comfort and Dr. Pepper in one hand, and a copy of De La Soul’s newest album “Bionix” in the other, I’m stuck at a perplexing conundrum which I had only hoped the alcohol would clear. Instead as the hour draws nigh and the fog descends over my eyelids, I find that choosing the right words about this album only grows even more difficult, rather than less.

Perhaps I should start by telling you that De La Soul is one of my all-time favorite rap groups. I already own all their albums, I collect their singles, I’ve seen them in concert several times and I even own an autographed copy of “Buhloone Mindstate.” You will hardly find a stronger advocate for the importance of their place in rap than me, nor defender of their vast catalogue of work. In fact, I consistantly argue to both doubters and naysayers that “Stakes is High” and “Art Official Intelligence” were not only great De La Soul albums but worthy editions to any conniseur of intelligently made rap music with great beats and rhymes.

Brilliance is in fact the curse that De La Soul has never been able to live down. Ever since their debut album “3 Feet High and Rising” (recently digitally remastered and reissued, I might add) they’ve been pigeonholed in the tiny nook of high expectations. Every album, people question their steelo – why aren’t they more esoteric, why aren’t they more hardcore, why aren’t they more loquacious, and WHERE THE HELL IS PRINCE PAUL? The latter seems to be the question nobody can get over; as if a group this talented and creative could only produce fresh and witty music if under his demented musical direction. I personally request that this subject be banned from all further De La discussions – the Prince Paul era is GONE and they’re all doing their own things now. Some people just need to wake up and get over it.

And in fact, if people would get off their high horses and their De La Snobbery, they’d find that what De La does is just as relevant and fresh sounding now as it ever was. This mostly self-produced album (with able assistance from Dave West) has plenty of tracks that attack the wax and lambast the whack. If you’re not feeling the brilliance of the xylophone loops and witty, “Deep like Barry White’s throat box” rhymes of Pos on “Watch Out” they’re just turning the deaf ear of a hater to a rap group that can slam jams without needing a remix from DJ Premier. The bouncy good-times fun of the lead single “Baby Phat” with Devin the Dude recalls any of the greatest hits in their catalogue from “Potholes in My Lawn” to “Oooh!” In fact, the “natural beauty” sentiments of this song are very timely and appropriate in a world of far too skinny fashion models and rap video hoochies whose unnatural curves require extensive plastic surgery and liposuction. I agree with Devin – when I see a girl with some “Baby Phat” I want to compliment her size!

Still, even as one of their strongest advocates, I have to admit there are some songs on “Bionix” that don’t work no matter what angle you look at them from. “Pawn Star” is simply terrible – trying to imitate the sly sexual funkiness of a Digital Underground sound while interjecting it with a terrible sung falsetto that even Kool Keith would be ashamed of. “Peer Pressure” should have been a certified banger with a B-Real cameo, but seems to lope along and go nowhere fast. The “Ghostweed” skits should have been retired on the last volume of AOI, but “It’s American” brings back a dead horse for another beating. And I’m sorry, but the rapper Philly Black sounds like a bad Fabolous imitator (who himself is a bad Ma$e imitator) on the song “The Sauce.” These tracks are uncharacteristically unfunky for the originators who once had Millie pull a pistol on Santa Claus.

Thus, we have a perplexing conundrum that would make even a 14-sided Rubik’s Cube look easy to solve by comparison. Some of De La Soul’s best work to date is included on this album, and Dove a.k.a. Dave now sounds good enough to challenge the dominance of Pos on tracks like his solo joint “Am I Worth You?” The funky singing of Goodie Mob member Cee-Lo on “Held Down” stirs the soul, and “Simply Havin” is an all too short dose of resurrected funk from A Tribe Called Quest that proves their decade old debut album will never go out of style. Ultimately this album is just plain confusing – at times it comes off like what could have been De La’s greatest LP to date, and at times it sounds like a collection of leftover studio tracks thrown together for an album. I’m forced to admit that this is not a great De La Soul release – it’s a De La Soul release with great SONGS, but that’s not quite the same thing. While devoted fans like me will want to cop this LP, other people will simply cop the single(s) and let this joint slide to the side in a fall/winter season that’s already sporting an overabundance of new hip-hop albums. The biggest shame is that it relegates the great De La Soul to “just another new album” instead of a must-have rap purchase.