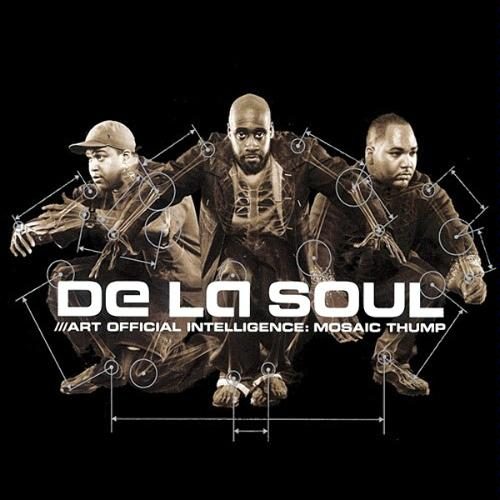 Long term success in the rap game is one of the most difficult things to achieve in all of music. There have only been two hip hop artists who enjoyed great success in the 1980s, as well as in the late 1990s: Too $hort and Slick Rick, who have been dropping certified gold and platinum records since the mid-80s (Too $hort since “Born To Mack”, Slick Rick since “The Show/La-Di-Da-Di” 12″ single), and both came up with gold albums in 1999. While greats such as Big Daddy Kane and Rakim have attempted to make comebacks, their receptions were lukewarm at best (even though Kane has had some real hot guest spots), losing a measure of their old fans by changing, and not choosing the type of beats that impress the new jacks. While Too $hort has always survived by catering to the faction that wants a good old fashion pimps up hoes down rap, Slick Rick has thrived on his ability to change style and subject matter in his raps. Enter De La Soul, who resemble the latter much more than the former. De La Soul, the masters of versatility. The trio of Maseo, Pos, and Dave debuted in 1989, with (if this is possible) an album that was both a cult and mainstream (it’s certified platinum) classic, “3 Feet High and Rising”, was an upbeat, leftwing, slightly immature album. Next album, “De La Soul Is Dead”, was a 180 degree turn from the first, displaying the darker side of De La Soul. The next two, “Buhloone Mindstate” and “Stakes is High”, fell somewhere in between the first two. So, the questions surrounding the new release was: would De La be able to continue evolving and coming with fresh new styles, and would they be able to capture a portion of the contemporary rap fan base.

After the intro, “U Can Do (Life)” opens things up, and if nothing else it serves the purpose of showing that De La Soul still contains three of the best lyricists that hip hop has to offer, throwing out similes like “We burn slow like syphilis in your piss”, and metaphors such as “An apple a day only makes a nigga fruity/I eat responsibilities to carry out my duties”.

After this, as well as a nice beat from Supa Dav West, I had a feeling that I would not be disappointed with De La Soul’s 5th effort.

The next song, “My Writes”, features three members of the Likwit fam: J-Ro, Tash, and Xzibit, and is produced by Ad Lib. The beat is well done, displaying a definite west coast flavor. The song itself isn’t really De La Soul, with references to “nut juggling”, and wack lines like “I love money like I love my mama”. And while CaTash and X to the Z can hang with De La on the lyrical tip, J-Ro is simply outclassed on this song. Still, it’s a good song; it would just be better without J-Ro’s “contributions”.

The lead single follows, which if you didn’t know, is “Oooh”, featuring Redman. This is a pure (and self-professed) club track, and it works. The Funk Doc provides his usual high energy, weed-induced haze for the “hook” (there’s no repeated lines other than the song’s title). And De La, in the tradition of all great rap artists, takes standard topics and turns them into clever lines: “I’m iced out like a glass of tea/Better yet oatmeal cookies, y’all just rookies to me.” This song has a good shot at catching the mainstream crowd, and the video is a humorous parody of “The Wizard of Oz”, but the video also has numerous cutaways from the actual song for skits, which may not be a good thing when trying to capture the admiration of today’s short attention span rap fans.

If there was another track on here that had the potential for capturing the mainstream crowd is “I.C. Y’All” with a Busta Rhymes-provided chorus. I personally think this may have been a better choice for the lead single; Busta Rhymes brings even more energy than Redman for the hook, and Rockwilder shows his Erick Sermon lineage with the beat here: not too complicated, just some real dope shit. Like “Oooh”, it is essentially a club track with nice lines.

Speaking of Slick Rick, his name pops up several times on the album itself (not just in the intro to this review). In addition to several other references (“Like Rick D and Vance Wright, no one can serve us”; “We like to party, we don’t bother nobody”), the first verse of “Set the Mood”, guest star Indeed does a semi-cover of Rick’s classic “The Moment I Feared”, adding to Mr. Walters’ resume as the most sampled rapper of all time. The best lines, however, do not come in this verse, but the second:

“My Art is Official while you you’re artificial
Break it down to your very last participle..
..I’m in everything you see, like crammed
Yo, I’m in demand, I’m in the club, man I’m in your hand
Being bought, I’m even on your thoughts
Like your girl, the only thing you’re in is inactive”

This is the type of shit that seperates De La from 95% of the rap world.

“Declaration” is one of several tracks that address the current state of hip hop. As one would guess, De La does not like the direction that the majority is taking: “Your aim’s to please/My aim’s to freeze ya dead center, end the track with ya hands high”. The beat is very fitting: hardcore sounding, with heavy scratching. But once again, the track’s biggest strenght is the the lyrics:

“There’s truly a few making them hits
While us, we got our mits
Closed, cuz you on the field bunting
Make it to third base, but never reach home
The word is your worried about the unknown”

De La did a good job of interspersing the album with different types of tracks; they spaced the hardcore tracks and the more club oriented tracks evenly throughout. “Copa (Cabanga)”, a club-style track with a funky beat (from Supa Dav West), pretty much just puts you in a good mood, which was the aim.

“The Art of Getting Jumped” is a humorous funny-cuz-it’s-true story track that satirizes club life, from the violence to the gold diggers. The beat is a dope, fast paced sound that De La provides themselves.

The outro is “U Don’t Wanna B.D.S. (Bust Dat Shit)”, which is an industry shakedown of sorts, featuring, you guessed it, Freddy “Bumpy Knux” Foxxx. The only bad thing about this song is that Foxxx doesn’t bust a verse, he just rants, but his rants even has more energy than the vast majority’s verses. In addition to the attacking lyrics, the production is some of the best that the album has to offer (once again provided by De La Soul, who produced 10 of the 16 actual tracks on the LP), and all in all ends the album with a bang.

Lyrically, it’s about as good as any album I’ve heard in a long time, and the production is very well done. Look back to 1988: Slick Rick changed rap forever when he released “The Great Adventures…” One year later, De La Soul changed rap forever with the release of “3 Feet High…” Look forward to 1999: Slick Rick proved that a rap artist can earn a fanbase among new jacks but keep their old school fans. One year later, De La Soul, confirmed once more that it is possible. De La Soul have held onto their crowns as the kings of innovation. This time around, they took cliched subject matter and made it interesting, and interesting subject matter and made it mind spinning. There are few rappers who can claim that they changed the game for the better; there are fewer still that can say they’ve been in the game for more than ten years and are still as dope as they were when they dropped their first album; De La Soul can claim both, and that’s saying a lot.