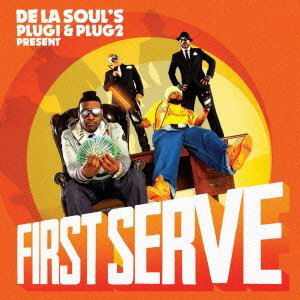 Amid the initial resistance toward this style of hip-hop, few artists or groups have garnered as much critical acclaim as De La Soul. For their soon to be released album “First Serve,” Posdnuos (a/k/a Plug 1) and Dave (a/k/a Plug 2) attempt to take their musical ambition and fondness for crafting concept albums to another level minus third member Maseo. “First Serve” has Posdnuos portraying the character of Jacob ‘Pop Life’ Barrow, while Dave plays the part of Deen Whitter in a fictional story about a young rap duo struggling to succeed in the world of hip-hop.

Much like film, the ability for Posdnuos and Dave to produce an interesting narrative that captivates the listener will ultimately determine whether “First Serve” is a worthwhile concept album. Luckily from the start of the record, the listener is able to immerse into the story and is given the chance to learn about the duo and relate with the various moods they feel as a result of the different situations they encounter. From the “Opening Credits” it is clear that the young characters Jacob and Deen are “different, but the differences seem to complement everything we do.”

The solid “Pushin’ Aside, Pushin’ Along” features an upbeat piano loop and sped-up vocal sample for the backdrop, with the duo detailing the lack of support they receive from their parents, while vowing to keep focus and follow their hearts. “Small Disasters” is a particularly effective and revealing track featuring a rhythm guitar, smooth percussion and a melancholy synth. On this tune, the group expresses doubt in their own ability as they have yet to be signed to a record label, with Deen even asking God for help. Though insecurity can practically creep up on anyone, it is refreshing that the tune articulates this feeling in a straightforward way without a trace of the usual hip-hop bravado.

The following track “We Made It” provides a nice change in mood as the record contains strings and horns, while Jacob and Deen celebrate signing to the record label Goon Time and they floss about buying the finer things in life. Despite just experiencing this new level of success, “The Book of Life” takes the listener on a roller coaster ride with a solid organ, rhythm guitar and harmonica blend as the duo reach an ultimate low since they start feuding and eventually break up in the dramatic “Clash Symphony.” Regardless of the bitterness between the duo, the reconciliation record “Tennis” shows that the bond between Jacob and Deen was always authentic as they demonstrate outstanding and heartfelt lyricism about their personal struggles and friendship:

Deen: “Thought I lost you love, now I’m lost and found
Searching high and low and underground
Got the bond back and the bomb back
See when hearts race, we throw the batons back
We at the finish line, let’s celebrate
Troubled minds, we meditate
With a handshake, not a contract
See a brother’s love ignites with contact
Once hopeless, now I’m hopeful
Not remotely the path that we hoped for
What we wrote for is all we built Pop
I’mma take it to the grave and hip-hop
Now that’s love”

Jacob: “Now that we back
Me and Deen trying to be in all in them pockets like Dennis
Sort of like tennis, serving the business
Birds of a feather and together we in this
Raised part time in these streets
While our parents faced hard times with our lives
And no guarantee that we wouldn’t find some trouble
Like kids troublemaking we did
My nigga Kenneth Dumar was rewarded a bid
And came out as Ken Du and we continue
To memorize memories like we were elephants
Local shorties know we’re relevant
Leather tough dynamic duo
Duff niggas out with the BOOM POW
Fuck around and show you how, First Serve!”

As a concept record, “First Serve” is as dope as they come. For the most part, each song and quirky skit complements the last one since Posdnuos and Dave are able to set various moods in an organic way. As well, using their first hand experience the duo is able to cleverly reveal the trappings associated with the music industry through their fictional characters. Though this won’t go down as De La Soul’s best album, it is highly intelligent, artistic and features razor sharp lyrics making it arguably Posdnuos and Dave’s most musically ambitious project yet.