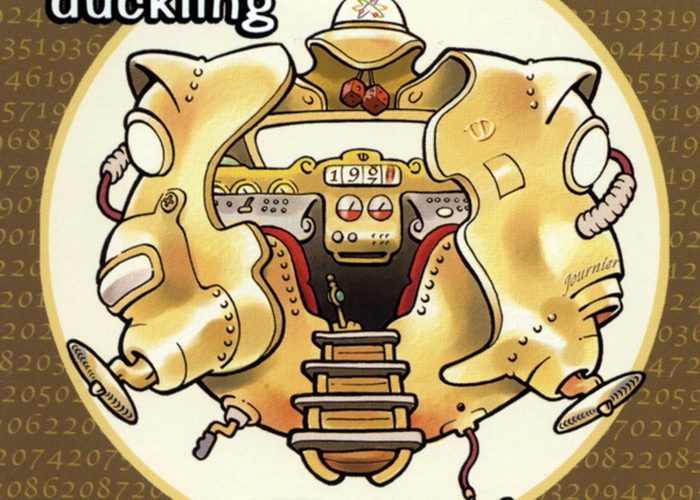 A few years back and I don’t know exactly when, a group from southern California by the name of the Jurassic 5 released a short EP. The beats were undeniably tight and the emcees were dope. The J5 EP became an underground hip-hop favorite and underground music fans across genres, and even some mainstream, took notice. A few years later, J5 drops the full length, “Quality Control” and now they’re on MTV. I now use J5 as evidence that there is, in fact, hope for the mainstream.

Meanwhile, another group from Long Beach by the name of Ugly Duckling released a short EP. The beats were also tight and the emcees were also dope and on some chill old skool rock the party shit. “Fresh Mode” did not sell quite as well, despite being longer and having a better cover. It too became an underground favorite, but less so and with fewer fans in other genres taking notice. A few years later, Ugly Duckling drops the full length “Journey to Anywhere” and I don’t see any reason why they shouldn’t be on MTV too, especially because “Journey” is fresher than a sassy youngster on the set of an Irish Spring commercial.

“Journey to Anywhere” starts off with the adorably named “Introduckling,” which, at three and a half minutes, is rather long for an intro. And I am so thankful for this because it is easily among the best tracks of the album. “Fresh Mode” had one key problem: it drags a bit from the very beginning. “Introduckling,” however, is about as rowdy as UD gets… party people in the background spitting “U-G-L-Y” etc. The beat is mad nice and Andy and Dizzy both fucking destroy the track. (Dizzy: “Leave it up to me to put the B in B-Boy/I bring a point to yer ear like Leonard Nimoy/Dizzy Dustin is my nom de plume/in bloom on this Ugly introduction tune.”) By the time it was done, my neck hurt and I was fiending for the rest of the album. Maybe the best introduction cut I’ve ever heard.

The best part? “Journey to Anywhere” completely lives up to its dope introduction. Of the 14 tracks on the album, only a few are remotely forgettable. Lyrically, Andy Cooper and Dizzy Dustin haven’t changed much since back in the day, still kickin simple and witty lines like “Get this/I drop more lines than Tetris.” Wack, but in a good way… not many groups could get away with saying “Man, I come fresher than a moist towlette” in the first place. The chemistry between the two emcees is almost like that between Tip and Phife in the early days of ATCQ. Andy’s rhymes are a little more serious, while Dustin gets wackier with sillier punchlines and an extremely “white” voice. The balance works very well.

Ugly Duckling excels the most in their subject matter, which bounces all over the place. Cliched hip-hop topics, such as straight battle rhyme tracks and whining about commercial rap, play a surprisingly small role in the content. When it does appear, such as in the sarcastic “A Little Samba,” you aren’t sick of hearing about it (especially when every verse ends with “Why you livin with yer mama?”). “I Did It Like This,” the lead single, reminisces on the good ol’ days of rap, but not in a sad, what the fuck happened? style, more pointing out that they’re still, well, keeping it real. On “If You Wanna Know,” Andy and Diz talk about getting jumped, but the picture they paint is more cartoonish, making the idea more interesting. The rest of the subject matter explores new or rough lyrical terrain. The title track takes it even farther back, flipping rhymes about grade school. (Andy: “I went to Judy Blume’s for dinner/she wouldn’t let me budge/til I drank my ‘Freckle Juice’ to wash down the ‘Superfudge.'”) “Pick Up Lines” speaks for itself. “Eye On the Gold Chain” focuses on Young Einstein’s dookie gold chain. Word.

“Eye on the Gold Chain” (a sequel of sorts to “Einstein’s Takin Off”) is another one of my favorite cuts on the album because Ugly Duckling’s DJ is responsible for so much of the dopeness of “Journey.” If the beats were nice on “Fresh Mode,” they are even better now. My picks, beatwise, are “A Little Samba,” “If You Wanna Know” and “Pick Up Lines.” More importantly, “Eye on the Gold Chain” showcases Einstein’s much improved scratch abilities. He always had beats… but, like J5 said on “LAUSD,” what is a DJ without the scratch? His cuts on the previously hyped “Introduckling” and on the hook for “Friday Night” are equally sick. Young Einstein has definitely made himself a force to be reckoned with.

All that being said, this album does have some drawbacks. First of all, sometimes Andy and Diz slip a lil bit and bite J5. For example, on “I Did It Like This” Andy spits “We take a beat and a rap/and then delete it to track/and keep repeating it back/til it’s complete and in tact.” Yeah, it’s tight, it’s not too often and they do have similar flows sometimes anyways, but it just sticks out so much sometimes. It’s not quite as bad as when Team Demolition used the hook “We gonna do something you never seen before/makin one emcee out the sound of four,” or something. It just grates on you after a while. Second, and more important, the whole innocence of the album feels somewhat wrong. There are so few references to violence, even in battle lines (if there are any – I’m not sure there are)… even “If You Wanna Know” takes getting robbed and makes it sound comical. It almost sounds like a cartoon. This doesn’t necessarily hurt the album, but some people may quesiton its purity, wondering if there has to be some element of ruggedness in all rap.

The fact that Ugly Duckling don’t seem hard at all (even though Diz used to drive around Compton’s Most Wanted) may be what is keeping them off the charts, while J5 soars. Regardless, I think anyone who appreciates dope beats, tight lyrics and everything else good about underground hip-hop will undoubtably dig “Journey to Anywhere.”