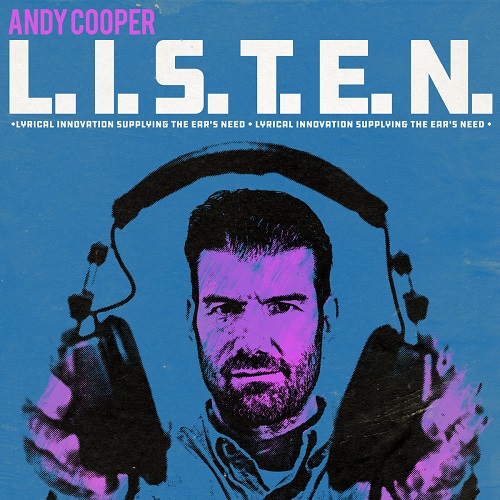 In the past twenty years or so a relatively popular angle of Northern American comedy on the big and small screen were characters who think they’re cool when they’re anything but. Consider the concept of the teenage boy trying to be one of the cool kids but duplicated into an entire cast of irresponsibly and awkwardly acting adults. It may not always be so-called cringe comedy by definition, but it’s ever so often cringeworthy.

As a genre where being cool is half the battle, rap music wasn’t entirely void of such types. To be sure, with very few exceptions these would have been of the unintentionally funny kind. On the cover of it, if you wanted to create a rapper that is thoroughly uncool in today’s landscape, you could come up with someone that resembles Andy Cooper. The fact that he just raps and nothing more is an in-joke in itself and should automatically endear him to rap traditionalists, but the question is valid to what degree rap even retains some mystique of cool these days. Add the fact that he decided to embark on a solo career quite some time after having enjoyed mild success with the group Ugly Duckling (likely more popular internationally than domestically) and that he’s a disciple of fast rap, multisyllable rhyme schemes, cut-in vocals, wordplay, pop culture references, breakbeats, loops of the vintage jazz, rock, soul and R&B variety and having good, clean fun, plus that he’s white, and you got yourself a fairly uncool rapper by today’s standards.

Andy Cooper himself is fully aware of this, although it’s not really his responsibility to fully acknowledge it. The very first thing he does on “L.I.S.T.E.N.” is admit that its musical format is dated:

“I’m pretty sure nobody cares
This sound has been irrelevant for 25 years
So why bother, why persist?
What’s the use of producin’ this?
Well, I guess I made the album for me
Hopin’ there’s another Andy out in humanity
But whatever the case, the tune is fresh
Even if I’m the only one truly impressed”

This line of argument isn’t too far from rappers telling us that what they’re doing feels right to them. The punchline to Andy Cooper’s presumed uncoolness would be that he may just have the last laugh because he does what he wants and what he does best.

Either way there is a comedic element to the beats and rhymes that some may find entertaining. “L.I.S.T.E.N.” is a fun album. One that comes with rap skills, but a fun album nonetheless. Where enjoying life itself is prioritized over enjoying the perks of being a celebrity. Also, to artists of Andy Cooper’s ilk, having a good time is a social thing, his musical backrop is likely to invite a greater demographic to dance than just one generation, plus it often sounds like Andy has a real band behind him and would be most at ease if he could rock in front of a live audience.

“L.I.S.T.E.N.” (an acronym, what else) checks those retro pointers with verve. The pile of vocal samples that acts as a foreplay to the title track doesn’t include Jay-Z, but “Do you fools listen to music or do you just skim through it?” (“Renegade”, 2001) would surely support Mr. Cooper’s case. RapReviews.com would be the last publication to tell you not to listen to what rappers have to say. “I feel young when I’m rockin’ a breakbeat”, he beams in opener “Deluxe”, but the fact that literally all his references date from the ’70s and ’80s should make him feel at least a little bit old. You can feel special if you namedrop trusty James Brown sidekick Bobby Byrd in 2020, but at what point is your special too special? There’s an innocent ‘Schoolhouse Rock!’ vibe to some of these songs, as if the rapper wanted to pay homage to his childhood days, and even without an explicitly educational message, the video to “L.I.S.T.E.N.” drives this point home with its throwback children program visuals.

If there’s a difference between fun music and feelgood music, it’s felt on tracks like “Struttin'”, an ode to getting your groove on (in the most innocent, literal way). If only there was a social media platform where people stuck at home could share their lip synching and dancing efforts to popular songs or catchy tunes whose mass appeal is yet to be discovered…

“Fly Tonite” talks about “the encouragement that a great song creates”, and while offerings such as “Struttin'” and “Fly Tonite” are closer to breezy ditties than great songs and provide a gentle nudge rather than full-blown encouragement, no music lover would object to the sentiment. Perhaps sensing that songwriting can absolutely dig a little big deeper, Andy Cooper reflects on self-doubt on “Heart” and bids farewell with the inspirational “Stand on Up”.

Already three albums into his solo career, Andy Cooper continues to practice good-natured rap music that maintains a combative spirit. What’s lacking, especially this time around, is a minimal edge. DJ Format collaborators Abdominal and Phill Most Chill have released projects that had that certain edge that grounded them in the hip-hop universe. A specific prolem of “L.I.S.T.E.N.” is that the vocal production robs his voice of its last grain of grit. Raps have to stand out sonically, if they don’t, everything from specific statements to entire songs can be jeopardized. Also any form of experimentation wasn’t an option when it could have been. Or the involvement of kindred spirits. He did the right thing inviting BlabberMouf for this album’s predecessor, imagine the credibility a Percee P cameo would bring to an Andy Cooper record.

Examining his situation from different angles on the first track, Andy is aware of the dangers of living in the past. For the duration of his 2020 album, he decides to take the trip anyway. Even if he is the only one truly impressed. If you too are, perhaps too easily, impressionable when it comes to those little technical stunts that rappers used to do, you might enjoy the quick Melle Mel impersonation on “Tension Release” when he says that dropping bombs is “all I wanna do like Chaka Khan”, previous names rhyming with Chaka Khan being Papa John, Jacques Lemans and Dr. John. And when he thumps his chest on “The Man”, is one of the comparisons Dilla or Dylan? The fact that with this rapper it could be either one is kinda cool.