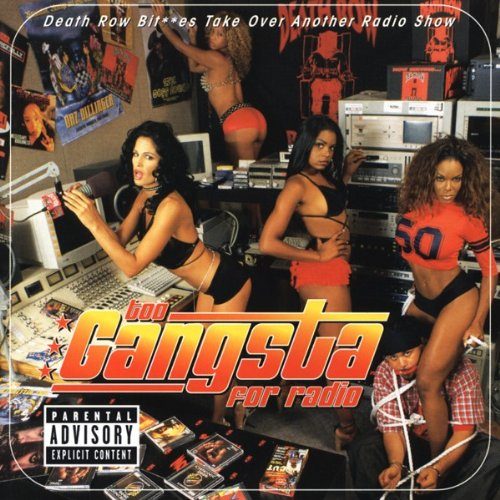 Various Artists :: Too Gangsta For Radio

Gawwwwwwwd damn. What else can you say when you realize that Death Row is still in business? It’s hard for Suge Knight to collect a check in prison – where does all of the money go? Apparently to the “Prisoner Fund” if you read the liner notes; where wrongfully convicted inmates can apply for help in obtaining their release. The logic here is a bit twisted though — the application to receive help is IN THE ALBUM ITSELF. How many locked-down inmates are going to be buying new CD’s?

Ours not to question why, just to let their accountants multiply. If anybody knows how to come up on a hustle, no doubt it’s Suge. With Dr. Dre’s help, the label built a reputation for hardcore take-no-shorts rap and booming beats that sold millions of copies. They also have the sole claim to being Tupac Shakur’s last record label while he was still alive; and for each of their compilation albums (such as last year’s “Chronic 2000”) they seem to unearth another song or two of his to release. To the Row’s credit, the QDIII and Big Hutch produced “Friends” and QDIII produced “Thug Nature” are both above average ‘Pac songs in terms of the NEW Tupac songs to come out. The latter is actually an interpretation of Michael Jackson’s “Human Nature” that would have been right at home on his “Makaveli” album or as the B-side of a hot single.

However, this is not a Makaveli LP or a Tupac EP — it’s a 17 song, 19 track long compilation album of various artists on Death Row; and the Row is bitter. If they were any more bitter, they could open their own brewery. With no shame and plenty of malice, Death Row bombs on anybody who was “down” but left for greener pastures. Specifically, Dr. Dre and Snoop Dogg catch the most heat. On the album’s “Intro” they have a skit where a scared-sounding Snoop imitator cowers in fear of Suge Knight’s release date. If you don’t like homosexual fantasies though, stop reading now. “Fuck Dre” features a wannabe rapper getting it up the asshole from Andre Young himself while Dre’s “Fuck You” from “2001” is playing in the background. You gotta give the Row credit for audacity though — the entire song is a parody of “Forgot About Dre” from the beat right down to the triple cadence raps and the chorus. The strangest (and perhaps most ridiculous) accusation though is that Eminem is a card-carrying KKK member on the intro to K-9’s “Gangsta’d Out.” At least the intro is more interesting than the silly song.

Tempting as it might be for Dr. Dre to file a lawsuit here, it would only give credence to what the Row is trying to say. Hopefully Andre will take the high road; in fact, he can probably listen to these songs and laugh. If Dr. Dre wasn’t making millions of dollars while Suge Knight was behind bars, they probably wouldn’t be mad like this. I don’t know if you can exactly stick them with the label “haters” or not but it’s safe to say that this album will be lucky to sell one-tenth what Dre’s “2001” does worldwide. Tupac is dead, Dre and Snoop are gone, and none of the label’s next generation has star power.

There are a few good songs here, but as a whole they come from sources outside of Death Row. When you hear Treach and Scarface on Crooked I’s “Gangsta Rap” or the Daz produced “Murda For Life” by Ja Rule and the Murderers, you know what’s up. When you hear Tha Realest trying to sound like Tupac on “Fuck Hollywood,” you know what’s up too. Above the Law APPEARS to be down now though, so the Row has one credible and successful artist. Including ATL’s “Everywhere We Go,” Big Hutch produced three of the album’s first four songs — all except for “I Ain’t Fuckin’ Wit Cha” by C.J. Mac. It’s no coincidence Hutch’s work is the best part of the album. It’s also worthwhile to check the Ant Banks produced “Real Type Gangsta” by Mac Shawn – it’s another bomb from the Bay. It’s also the last highlight on here.

This album is painful in many ways. It’s painful to hear the voice of Tupac Shakur speaking from beyond the grave. It’s also painful to see his record label trying to eke out a few more album sales by releasing his material two songs at a time. It’s even more painful to see how a rap label that was once at the top of the genre in sales and artistry reduced to talking nasty about the people who abandoned ship. Death Row certainly understands that controversy sells – artists like Dre, Snoop, ‘Pac and Kurupt built Death Row’s empire by feuding with everybody from the Fraternal Order of Police to C. Delores Tucker. Tucker won’t care if Death Row calls Snoop a bitch or Dre a faggot though because silly name-calling hurts nobody. It would only be controversial if any of the artists who were called out responded (verbally or with physical threats) and it’s unlikely they will since the Row comes off as desperate to spur record sales by starting a war. Their feelings may be genuine, but their motives ring hollow. We don’t encourage bootlegging but if you only bought this album for the new ‘Pac shit; get these two Tupac songs here from any other source and save your money. Even at $12.99 the admission price is still too steep for a collection which will by and large put you to sleep.